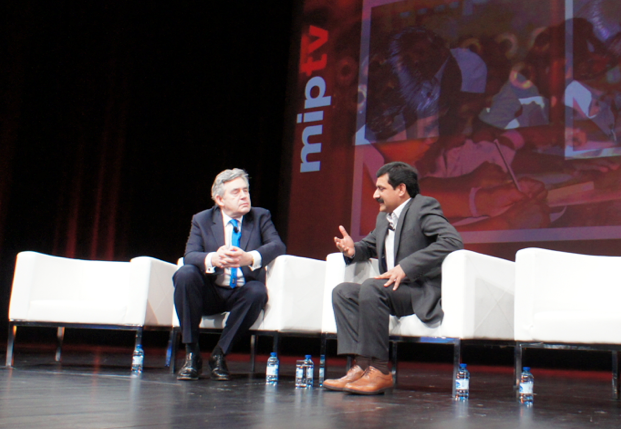 This important session covered “The 1000 Day Mission“, a UN-backed initiative to ensure that the world’s uneducated 61 million children all be in school by 2015.

Former British Prime Minister Gordon Brown led the proceedings, beginning with a video message from UN Secretary-General Ban Ki-Moon, who urged media professionals to “join us in a campaign to make sure no child is denied a quality education.”

Brown presented a timeline for approaching the goal. The organisation is also in talks with CoursEra to scale teacher training and start online colleges for them, in addition to reopening training schools that have closed. “I do not see the difficulty, over a 2-4 year period, in getting the number of teachers we want.” What is needed is funding, said Brown.

“Education is a powerful weapon: the means by which a community can escape poverty, a country can escape economic failure, and a world can provide security for its inhabitants,” he said.

Additional goals include abolishing child labour (a half-million girls are trafficked into forced labour yearly), child marriage and child trafficking, three major reasons children can’t go to school. If the deadline of 2015 is not met, the worst performers will be “named and shamed”, warned Brown.

Ziauddin Yousafzai, teacher, activist and father of Malala Yousafzai,  talked about what the Taliban has done to Pakistan and how things have evolved since his daughter, Malala, was shot in the face and head while on a bus to school.

When the Taliban first came into power, they banned TV sets. “So they knew the importance of media,” he said.

It was international media that ultimately brought visibility and outrage to the flogging and abuse of girls in the country. “We conveyed to the privileged people: come, we are suffering. Our basic human rights are being violated. I look to media as the protector of our rights,” he added.

He emphasised the importance of educating the 61 million. Education, said Yousafzai, imparts global values of tolerance, love and respect. Without it, “these children will be at the mercy of the people who will destroy their future,” such as militants. “They will be indoctrinated and dogmatised.”

After the assassination attempt on Malala’s life, five more teachers and the principal of a girls school were also killed, he said. This does not include additional attacks on young girls, whose only crime was seeking an education.

Gucci’s Robert Triefus joined Brown and Yousafzai to discuss Chime for Change, a production-rich campaign for girls’ education and women empowerment. It includes numerous stars: Beyoncé ‘chimes’ for health, and Salma Hayek ‘chimes’ for justice in one of their ads.

The campaign came about following Gucci’s nine years spent working with UNICEF on Schools for Africa. “We saw at that time how collaboration can bring about change on a local level,” said Triefus.

The Chime for Change website drives crowdfunding to build donations for women-focused programs around the world. It also tells encouraging stories through film, text and music. It culminates on June 1, when a musical event unites people in one place to raise awareness and funds.

“We are using model technology to get stories out to the world and inspire people, because we believe we’re at a tipping point,” Triefus said.

John Wood spoke next. His organisation, Room to Read, creates libraries around world.

The inspiration for the project appeared during a trip to Nepal, where a headmaster told him, “We are poor because we have no education; but until we have an education we will remain poor.”

“That struck me as the most cruel irony,” Wood recalled. “How do you tell a kid that he’s failed at the lottery of life?”

Wood decided to take action. “Let’s forever end the day any child can be told you were born at the wrong place at the wrong time and can’t get educated. I think that belongs in the scrapheap of human history.”

TV was a large portion of Room to Read’s success, with people like Oprah supporting the effort. It now opens an average of 16 libraries per day in the developing world. The average library reaches 400 children.

Room to Read also publishes now. “The big publishers don’t publish books in languages spoken by poor people,” said Wood, “but we do. We’re the publisher you’ve never heard of.”

He urged the audience to “use our business skills to create massive scale”.

Discovery’s David Zaslav spoke next to provide a survey of its long-term commitment to provide educational content to those most needy, through its Global Education Partnership.

“Part of Discovery’s heritage is education, satisfying curiosity. But all of us in media have the obligation to give something back,” said Zaslav.

“We’ve invested over $75M in this initiative and have been at it for 16 years. Corporate sponsors like Coke have worked with us too.”

But video content isn’t all Discovery does. “We have the leading education business in the US in science. We’re serious about this.”

He talked about the logistics of bringing content to places where computers and televisions may not be common. “As you go to Africa, the issue is getting technology there. You work with what you have. The most important element is working with teachers and finding a way to get the content into the village.”

Zaslav also said the presentation of women is important to empowering them. “How we present women and how we present our content: that’s a role model in the home.”

The challenge now is aligning media from multiple countries to work together in a unified goal.

Earlier, Brown proposed the power of an idea like Children’s Day. In the style of Mother’s Day and Father’s Day, Children’s Day would be globally recognised and come packed with its own media: spots, short stories, a musical anthem and dedicated time spent on children’s issues.

At the end of the session, Brown was asked how the UK’s budget is contributing to this enormous ambition.

“We had £15B earmarked for education to distribute over 10 years,” said Brown. “That budget is being honoured; we allocate aspects of that to countries with a plan. But we need to be equal to what is a global task. That demands international coordination.”