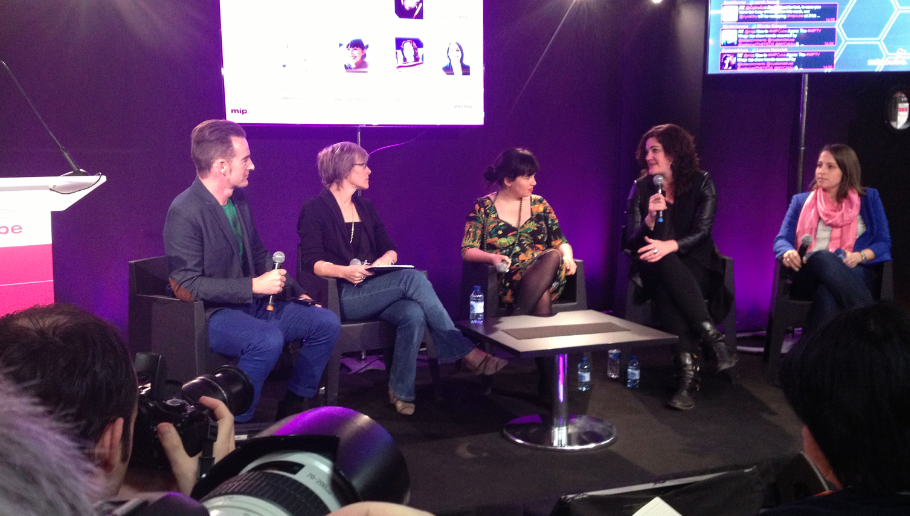 The wrapup session for this week yielded plenty of optimism for TV, and how its future is sharpening in focus.
By Angela Natividad on April 11, 2013 0 Comments

Four experts gathered in the Palais this afternoon to sum up the key industry trends, as seen in Cannes this week. The consensus: TV business innovation is most definitely moving in the right direction.

“Things we’ve been talking about in transmedia entertainment and multiplatform are actually starting to happen,” said The Feds’ Lisa Gray. “Those worlds are starting to see themselves working together” as opposed to seeing one another as rivals.

Building on that, Superhuman’s Louisa Heinrich observed that “In past years, the digital stuff felt isolated from the traditional stuff.” This year, the story is different: “there are still people in broadcast who aren’t interested [in digital]. But by digital people being more physically embedded here [at MIPTV], we get a lot more bumping into it, more positivity.”

“They’re all thinking about it from the beginning as opposed to slapping it on,” media commentator Kate Bulkley agreed.

As her top trend of the week, Bulkley singled out Magine, a Swedish digital TV service that’s facilitating the ease with which people can access broadcast content, notably allowing you to select programmes with your smartphone.

“Their approach is working with the broadcasters” as opposed to bypassing them, and “the UI is absolutely fabulous,” said Bulkley. “It’s beautiful, it works, it’s not trying to mess up the value chain.”

“It’s the sort of thing where you see it and you can imagine your granny using it,” quipped MIPBlog’s James Martin.

“There’s also this growing idea that there isn’t really a second screen,” Heinrich added. “There’s the screen I’m looking at right then.” Producers and networks are also starting to focus on engagement before, during and after a programme.

Branded entertainment is clearly also playing a major role in the transformation of TV and content.

According to Martin, “At MIPFormats, Shine 360 said ‘You mustn’t see brands as an ATM‘, which is a sign of progress.”

“Branded entertainment is pushing things forward in ways that broadcasters have been afraid to,” said Heinrich. Great transmedia stuff “has been executed by brands”, and “that’s what’s been pushing the whole monster forward.”

A good example is chocolate brand Lacta’s “Love in the End” film, said Marks. Not only was it branded content that people paid to see; it “launched online before it launched in theatres and still had the biggest opening night in Greece” — proof that broadcast and online can work together, not as rivals.

“People love content, telly, movies,” said Heinrich. “We love stories: to tell them, watch them, to feel like they belong to us. What’s exciting is I’m starting to see content creators care about that — not thinking of audiences as an object we throw stuff at. For the first time, I believe they want to engage.”

And it is technology that contributed to this sea change. Instead of taking the technology and the content that’s given to us, we have the opportunity to create our own ecosystems and decide what propagates inside them. Apple did this for smartphones; Magine is doing it for broadcast: it “yanks that monster out of the room,” Heinrich said.

Martin shifted the conversation to monetisation, which remains a big problem for broadcasters seeking to diversify… and users seeking access. “The question that keeps coming up is ‘Why do I have to pay $100 a month to watch Game of Thrones when I could subscribe to Netflix and watch all of House of Cards in one night?”

“I don’t think there’s an obstacle of people wanting to pay for stuff,” said Heinrich. “It’s that they don’t want to pay an extortionate price to have a bad experience.” She used Spotify as an example of how people will pay for music they could easily pirate because access and experience are so much richer on its platform.

Martin pointed out, “Game of Thrones’ season three premiere was the series’ most-pirated episode ever. The very same day that news came up, so did the news that Game of Thrones season 4 was confirmed.” This appears to tell a story substantially different from the one lived out by the music business: it suggests that despite intense pirating, original content can still pay its way.

“Access is where it’s at; not long-term hoarding of stuff,” said Heinrich. “The reality is, people would not be stealing it if they did not love it. It means you’re doing it right, you just need to do better about getting it to people. Because the experience of getting the content is a nightmare.”

Bulkley brought up “big data“, which she mentioned she’s hearing bandied around a great deal.

“Big data is good, smart data is great,” said Marks. “It’s the noise vs the signal: know what’s worth responding to.”

“Just because you have data doesn’t mean you know what it means,” Heinrich agreed. The focus must always be “the story around the story“: this should inform your engagement strategy and the data most relevant to you. What is it telling you, what is it contributing, how can you leverage it? (And is it worth leveraging?)

Conversation reached inevitably back around to branded content, when an audience member brought up Vice News and the conflict inherent in “branded journalism”.

“We also shouldn’t underestimate how savvy the audience is,” Gray said.

Coming from a journalistic background, Bulkley said she’d prefer a line to be drawn between editorial and advertising.

Marks brought up the notion of “collaborative equity“. In the case of Vice News, a brand brings its product and merits to the table; Vice brings its platform and cultural knowledge.

“We really respect the line between brands and journalism because we know that’s part of the value they bring to the table,” Marks added.

But this marriage is just a new one among many. Martin expressed relief that we’re hearing less about “transmedia”. “No one’s really saying it anymore; you don’t need to. Everything now is multiplatform.”

Asked what were her hopes for the coming year, by way of closing comments, Bulkley offered two: that there would be more disruption along the lines of Magine; and that TV could use its power to help social causes, such as the UN Global Education First Initiative launched here yesterday, whose aim is to send 61 million children to school by 2015. “In TV, we can really do great things,” she enthused.

That’s a wrap! Catch up on all our live coverage of MIPTV, MIPCube, MIPFormats and MIPDoc 2013 here on MIPBlog; and watch nearly 50 conferences in full here. See you at MIPCOM!