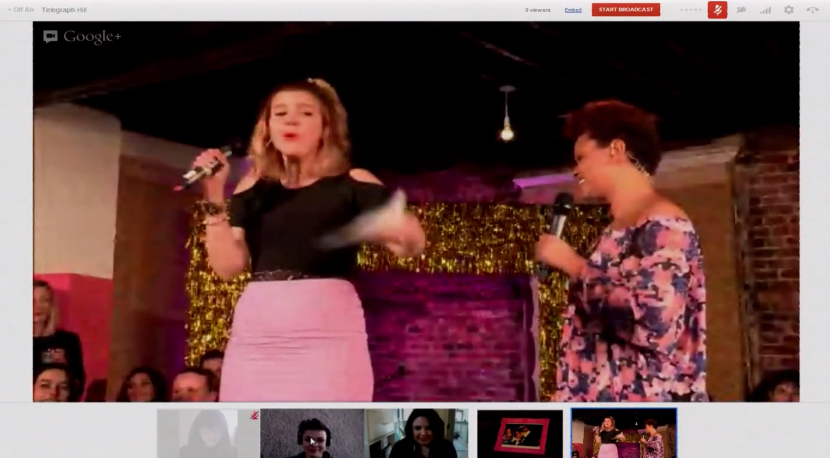 A new UK broadcast show called The Fox Problem is looking to leverage the power of social media by connecting with fans in realtime throughout each episode. But not on television. Instead, the show will stream exclusively via Google+, making it one of the first video series to broadcast live over a social network.

The programme, which will have an initial run of 6 shows, features three hosts in front of a studio audience, in a loose talk show format. The hosts, who come from more traditional media channels (Gemma Cairney from BBC Radio 1, Georgia L.A. from SB:TV, and Georgie Okell from Channel 4’s T4) call themselves the 3 Gs. Throughout the programme, they bounce from topic to topic around a general theme in each episode, incorporating musical guests and featured participants, who can chime in via Google Hangout (Google+’s super-simple group videoconferencing service).

The Fox Problem isn’t solely on Google+, either. The show’s website also includes links to Facebook, Twitter, Instagram, YouTube, and Tumblr. The programme describes itself as ‘social TV that answers back’ and viewers are encouraged to use social media to influence the show. For example, each week viewers can tweet to save their favourite presenter from completing a humiliating dare and the show features a character called The Ridler who sings viewers’ tweets live in the studio.

No matter what the medium, it’s clear that the show is meant to shake things up from the traditional TV ecosystem. A promo for the show includes the three hosts symbolically beating a TV with baseball bats.

Airing on Tuesday nights, The Fox Problem has broadcast four shows thus far. The show was developed by Telegraph Hill and All That Good Stuff.

Though it claims to be the first live TV show on Google+, The Fox Problem isn’t the first show to broadcast live online. It’s difficult to figure out where to draw the line between talk shows, scripted shows, and things like UStream and Justin.TV live shows, but the path to The Fox Problem has been paved by entertainment like the Chris Gethard Show, a New York-based, bizarro-comedy talk show that airs live on both public access TV and online, simultaneously, on a weekly basis. In fact, The Fox Problem seems to share some characteristics with the Gethard Show, using a live studio audience, musical interludes, and fan interaction via Twitter, chatroom, and more. Honeyshed was another live web experiment, undertaken by Droga5 and Publicis in 2008, which hoped to become a sort of interactive QVC for the web. Though the Gethard show continues to go strong, Honeyshed closed up shop after just five months.

The Fox Problem will certainly avoid Honeyshed’s fate, with a more editorial slant and a shorter, pre-determined run. That’s why it makes sense that the show is less about pushing products and more about implicitly pushing the Google+ platform. Whereas the Chris Gethard show broadcasts via YouTube, which has gradually been getting into the live video game, The Fox Problem’s delivery method of choice is Google+. Specifically, the show broadcasts via Hangout, letting selected participants chime in at any time throughout the broadcast. Although it’s not entirely clear what Google’s involvement in the show is, the company’s UK Google+ account did introduce the ‘social TV show’ on its official account in early March, suggesting the brand is somehow associated with the show’s production. Hangout is one of the differentiating features of Google+, and one Google would love to see catch on as an interactive content delivery platform.

To that end, the ladies of The Fox Problem are quick to extol the virtues of live, online television. In an interview with Glamour UK, they noted, “Streaming live on Google+ means we only have ourselves and the audience to answer to. This is the next generation of programming, talking about what matters right now and ultimately having a genuine laugh with our mates in the pub.” True though it may be, that sounds like the statement of someone shilling for a platform.

The Fox Problem, and Google+’s move toward live, original programming, plays into the Digital Live trend Contagious identified in February of last year. That trend, in which brands are increasingly streaming content online and engaging fans in realtime around those broadcasts, emerged mainly around live events like concerts. With consumers increasingly showing that they are willing to eschew television and watch original content online (see: Netflix’s move to original programming, HBOGo, Hulu) the launch of a show like The Fox Problem is a savvy move. Whether undertaken by Google+ or just coincidentally leveraging that platform, it’s a smart, low-cost experiment that will show off Google’s livestreaming technology. We think The Fox Problem won’t be the only such experiment of this kind we see this year.

This is the latest in a series of blog posts from Contagious Feed, a database of the most creative and effective marketing campaigns around. Contagious – a MIP Markets content partner – guides and advises brands and their agencies on competitor activity and future opportunities. More information here.