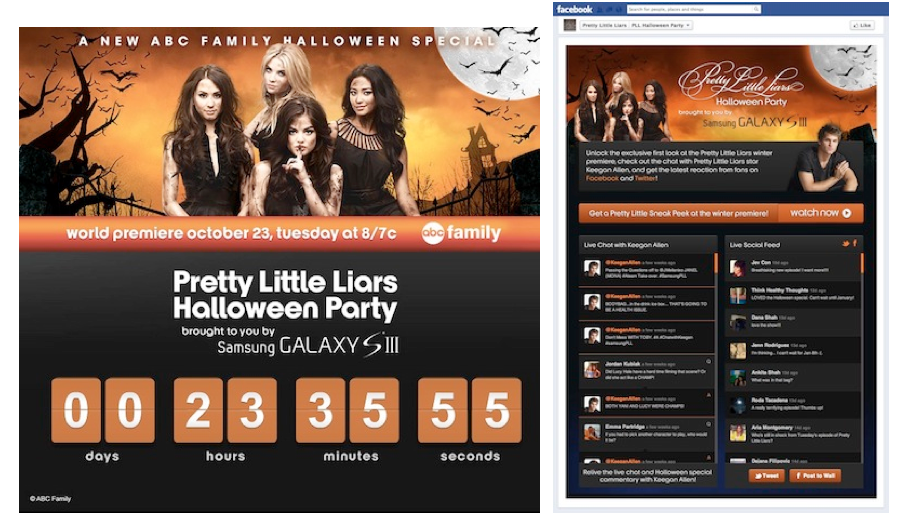 How can you keep a show's fans highly engaged from one season to the next? And why bother? Follow ABC Family's lead...
By Matthias Puschmann on January 17, 2013 4 Comments

“Pretty Little Liars” is one of ABC Family’s top-rated series of all time. One of the reasons for its continuous success is the network’s extensive and continuous activity on social media to promote and extend the drama. Not only are the actors very active on social networks and frequently interact with fans, but the broadcaster also provides fans with a significant amount of additional online content through various platforms such as Twitter, Facebook or Pinterest. ABC Family regularly extends the on-air experience with promotional campaigns and Social TV initiatives driving audience engagement.

Among the recent campaigns were the Twitter-based “Suspect Tracker“, the interactive “Countdown Calendar” or the “PLL Halloween Party” on Facebook. We take a look at these three recent examples.

To amplify social buzz, ABC Family released an interactive “Suspect Tracker” in the middle of season 3. The extension could be accessed on the show’s site and through the official show’s Facebook page. It allowed users to anticipate which one of the characters was “guilty of the ultimate betrayal” in the series. Users could vote for a character by tweeting a dedicated hashtag such as #PaigeIsGuilty or #LucasIsGuilty. The question wasn’t solved until the midseason finale in late August 2012. 12 characters were presented as suspects. For each of the 12 characters, a dedicated twitter stream was provided for fans to see what other people were tweeting about the suspects. Within 48 hours of launching, more than 136,000 fans had visited the “Suspect Tracker” and more than 15% had actively participated, according to Mass Relevance.

While the series was on hiatus, the network engaged with fans of “Pretty Little Liars” using live chats with creators and Q&A sessions on Twitter with cast members. Exclusive content such as never-been-aired scenes, sneak peeks or well scattered insider information and key insights were also part of the Social TV strategy.

In late summer 2012, ABC Family made its step into transmedia storytelling with the launch of “Pretty Dirty Secrets”. The eight-part web-spinoff bridged the summer break of the third season. In the web series, a new character called Shana was introduced. She works as a store clerk and appeared later in the original series. Well-known regular characters of “Pretty Little Liars” are also part of the online series. Each episode was watched by 200,000-600,000 fans generating more than 3 million video views overall.

The show returned in late October 2012 with one special Halloween episode accompanied by the Social TV event “PLL Second-Screen Halloween Party” on Facebook. The Facebook app “PLL Halloween Party” was released in early September 2012. It was specially designed to create social buzz on Facebook and Twitter after the midseason finale. During and after the broadcast of the episode, fans could ask two of the main actors questions. The different show’s hashtags were in the trending topics on Twitter during the broadcast. When the episode ended, a sneak peek of the upcoming winter premiere episode was unlocked in the Facebook app. Besides the chat option and the preview clip, fans could take part in a sweepstakes to win a Galaxy S III from sponsor Samsung. It was the first time, ABC Family also used Facebook for its chat with actors. There were 1.1 million social media comments about the special – 1.1 million tweets and around 1,300 public Facebook posts, according to Bluefin Labs.

A week before the midseason 3 premiere in January 2013, ABC Family launched an interactive calendar for fans of the teen drama. The “Countdown Calendar” unveiled new features every day, beginning on January 2, 2013. On the first day, fans could download a pdf calendar for the year 2013 with photos of the cast. On the second day, a script from the upcoming episode was unveiled followed by some sneak-peek photos, music from the upcoming episodes.

Accompanying the return of “Pretty Little Liars” in January 2013, ABC Family launched a Twitter-based scavenger hunt taking place in real-time while the midseason premiere aired. Mona, one of the characters of the series, tweeted clues to followers of her official fictional Twitter account @MonaVanderwaal during the broadcast. Fans had the chance to unlock a secret video by decoding the hidden message within her tweets. The 2-minute video contains footage, which won’t be seen in the on-air episode. Mona’s Twitter account was mentioned in more than 17,000 tweets during the broadcast and gained more than 54,000 followers in four days.

When the show returned on January 8th, 2013 with the midseason premiere of season 3, “Pretty Little Liars” accounted for over 52% of all Twitter activity peaking at nearly 39,000 tweets per minute and achieving a new record of around 1.4 million mentions on Twitter, according to Bluefin Labs. At that time, the Twitter account had around 950,000 followers. A day later, the 1 million level was reached. In the same time, the official Facebook account – now counting around 9.9 million fans – received around 34,000 new likes, according to Socialbakers.

With a compelling story and socially very engaged fans, “Pretty Little Liars” remains one of the most popular shows among young audiences with – most certainly – more great digital extensions to come soon.

This post is created by VAST MEDIA, whose mission is to track TV brand extensions and best practices in social TV worldwide. Check out their “Broadcaster Twitter Strategies” white paper here. More soon!