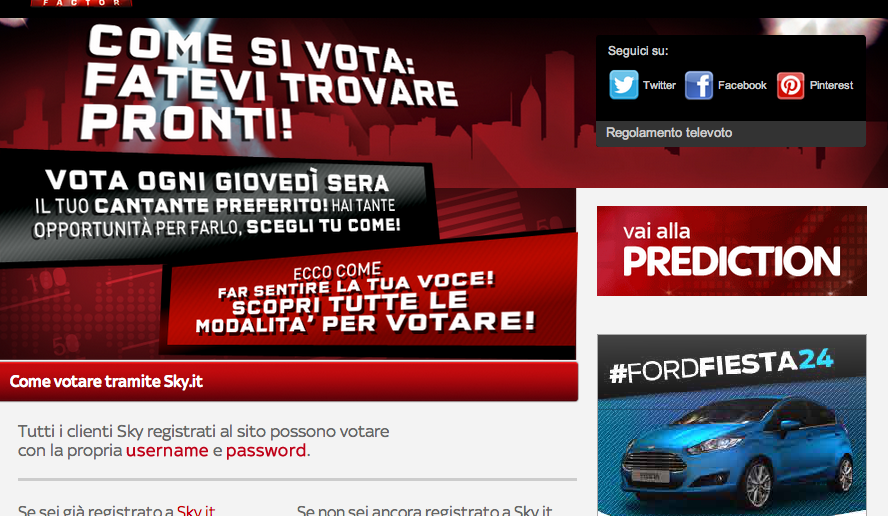 The X Factor is one of the most successful formats of the past 10 years, adapted and circulating across multiple territories worldwide. It is also one of international TV formats that has been extended online the most, with dozens of online initiatives being launched by broadcasters internationally. Click for examples of smartphone and tablet second-screen apps, online voting platforms, Facebook games, mobile auditions, live-tweeting, interactive branded websites.

Today, we take a closer look at the latest chapter in history of the branded extensions of The X Factor by exploring the set of second-screen solutions launched by Sky for the fifth edition of the talent show in Italy.

In recent months, Sky Italia launched a series of online extensions to further the audiences’ engagement and to extend The X Factor across multiple screens – web, TV, mobile – before, during and after airtimes. Let’s take a closer look at the different components online.

Social voting (on social networks or simply online) has been one of the major trends for TV broadcasters in 2012. For the 2012 edition of The X Factor, Sky Italia aligned with this trend, inviting viewers to create an account on Sky.it, or connect with Facebook to cast their votes online (photo). Additionally, Sky allows voting through Twitter. Viewers have to first follow @SkyUno or @XFactor_Italia’s accounts; then they will need to validate their accounts by sending in an sms, and finally they will be able to cast their vote using a direct (private) message.

Exclusive online content: Each Thursday at 21:00, before every episode of The X Factor, Sky Italia airs on its website the web-exclusive shows “Web Factor” and “Xtra Factor” (photo). During the “Web Factor”, the hosts of the web format interact live with the participants backstage just moments before the live broadcast to anticipate the upcoming episode. During the “Xtra Factor”, they go on stage seconds after the show ends to collect first impressions from the judges. Additionally, “Xtra Factor” features “the cube”, a ‘social room’ where posts, tweets and comments from the social sphere are commented by the hosts and by special guest, humourist Rocco Tanica.

Applications for smartphone and tablets: Sky Italia also launched an official The X Factor 2012 app for smartphone and tablets, available on iPad and iPhone as well as on Android devices. The app (downloadable here) creates engagement with the show through gamification: viewers can gain points by voting as well as taking part in polls, quizzes and by guessing the episodes’ results. Sharing activity on social media and using the “applausometro” equally helps viewers/players gain points.

Also available through the app is the official X Factor Radio, that features selected playlists and exclusive content during the programming weeks of the show on Sky. Some of the other functionalities of the app include a multimedia news section, featuring updates in real-time on show participants, events and gossips; a “talent” section, featuring in depth profiles of all participants: their hopes, dreams, lives; a “media” section, complete with picture galleries and video highlights from the show.

The X Factor Community Game: Sky Italia also extended The X Factor onto Facebook by launching “XF Community”, a social game created and developed by Hyper TV. “XF Community” is accessible through Facebook, but many of its functionalities are equally available on the tablet version of the game.

The game is built around gamified engagement: participants can score points, eg. by taking part in quizzes and polls, predicting winners, voting for participants, or sharing their activity on social networks.

Tweeting using the #XF6 hashtag, for instance, is worth 1 point. 3 points if the action is performed during the live broadcast. Every action allows users to collect points and have a chance to win Sky prizes and a Sony Tablet.

With this set of online extensions, Sky Italia made the most of previous extensions of the international format launched by other broadcasters internationally. The “Applausometro”, for instance, is very similar to the “Boo Clap” feature implemented by ITV in its past editions.

Twitter voting, besides having been one of the major trends for live talent shows this season, has been heavily publicised during the last edition of “The X Factor” in the US on FOX. Similarly, other apps featuring exclusive contents were previously released, for instance, in Germany, in Denmark and in France. Sky, learning from previous editions of the show and their extensions, channeled all these features into a unique, coherent set of platform.

The results of Sky Italia pushing its online strategy have been firmly positive, with more than 750,000 X Factor votes cast – almost the entirety of any given episode’s audience on Sky. For comparison, 1 million votes in total were cast across the five nights of the Sanremo Song Festival, one of the most-watched TV events of the Italian TV season on RAI (source: Variety).

On the one hand,this recent best practice by Sky Italia as such shows how the Italian broadcaster has been able to capitalise on the initiatives that other international broadcasters have launched in the past to accompany this format online, by translating and adapting some of their features for the Italian audience and TV context.

On the other hand, this also illustrate more broadly that online extensions of international formats such as The X Factor, have now become an inherent part of the TV programme, and are today able to circulate internationally along with it, to be translated and adapted across multiple territories.

This post is created by Vast Media, whose mission is to track TV brand extensions and best practices in social TV worldwide. Check out their “Broadcaster Twitter Strategies” white paper here. More soon!