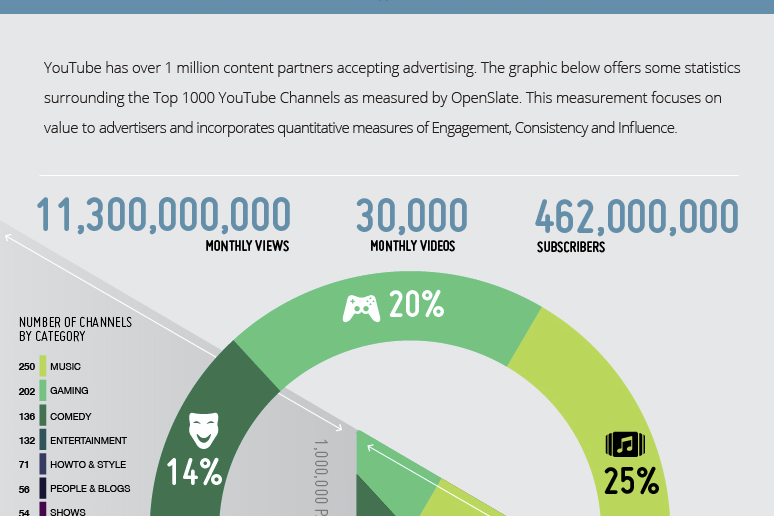 Our latest digest of the past weeks' hottest news stories, as curated via our scoop.it web magazines
By James Martin on November 23, 2012 0 Comments

Online video platforms, YouTube first and foremost, have gone from TV’s rising stars to inevitable players in the sector. Few better illustrations of this rapid rise to domination came than with this infographic (above: click here for full size), which ReadWriteWeb published with the title “YouTube’s Top 1,000 Channels Reveal An Industry Taking Shape”, no less.

Further evidence of how unstoppable the platform has become came as gaming network Machinima, YouTube’s largest (non-music) channel, ran mini-episodes of Blood & Chrome, the new Battlestar Galactica series. As the New York Times reported, this was a deliberate move by producer NBCUniversal to cash in on Machinima’s young male demographic, rather than counting on a standard broadcast on its SyFy channel. The gamble worked: the first 12-minute episode got nearly 2 million views. Enough to make SyFy rue its decision to run all 10 episodes as a film in February?

Speaking of young people, this was a perfect case in point of how, as Advanced Television put it, streaming is “eroding TV’s primetime”, citing a new GfK paper “showing that Generation Y (ages 13 to 32) is 30 per cent less likely to be watching a TV network or channel ‘live’ in the crucial first hour of primetime than they were four years ago.”

Precisely why YouTube is “prepping a big new round of content investments”, as AdAge reported, adding that only 30-40% of the platform’s original channel partners would benefit from this new round. Why? Because “Celebrity alone isn’t enough to drive it,” said Courtney Holt, COO of leading channel Maker Studios… “You need to have a commitment to the platform, to understand how to build your audience.”

Such engagement is clearly not escaping entertainment’s majors, however: a recent $40 million financing round of the same Maker Studios was led by Time Warner, no less. So maybe said majors aren’t that disrupted after all…

Especially as ‘pure’ TV remains as creative as ever! Bref, the ultra-short comedy show that was sniffed at by numerous French channels before becoming a huge success on Canal+, is to be remade in Spain, Italy and Canada, accordidng to TBI Vision. Fingers crossed for an English-language version!

So maybe then, regardless of platform, “‘Content is king’ again”, as paidcontent put it mid-November, meaning “Bill Gates may be right after all”, with regards his famous 1996 prediction. Why? The post gives seven reasons, including: branded content is paying off, as there are now “far fewer hang-ups about unifying church and state”; “social is content’s best friend”; new devices à la iPad are driving consumption; other technological advances mean content-making costs are falling…

Perhaps, despite some challenging times and disruptive developments, the sky is now the limit for TV content? Wherever that content may be…