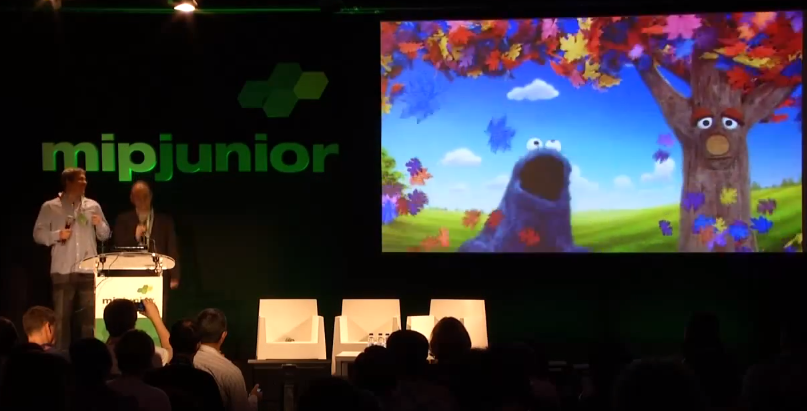 Digital is now truly second nature for kids, be it games, apps or websites. All of MIPJunior's key learnings resumed in one post!
By Stuart Dredge on October 17, 2012 1 Comment

MIPJunior got its first ‘Digital Kids‘ day this year. But in truth, digital permeated the entire two-day event, as broadcasters and producers discussed the potential of apps and websites for children’s entertainment.

“The next generation are really touchscreen natives. They play and learn in a world of smartphones, iPad and tablets,” said consultant Linda Kahn as she introduced one session. Researcher Dr Barbie Clarke later put some figures on that, from a survey of children, parents and teachers in the UK.

Or in other words, smart devices and social media are now second nature for children. “For kids, it’s not digital. It’s just entertainment,” as ContentAsia’s Janine Stein put it.

“Digital content is now ever-increasingly important to children of all ages,” said Alison Stewart, head of CBeebies production, animation and acquisition at the BBC. “Even the youngest children are now beginning to access and want to use the digital content.”

The CBeebies site has peaked at 1 million unique weekly users, and other broadcasters are emphasising web as well as apps when talking to producers about digital content.

“Is your project really something that from the beginning should have an app?” asked Sebastian Debertin, head of fiction, acquisitions and co-production at ARD and ZDF’s Kinderkanal (KiKA for short). “Should you think about creating something first like a web offer for pre-schoolers?”

Producers are broadcasters alike are excited about apps, though, especially when they look at some of the new children’s (or at least child-friendly) brands being built on the app stores.

ZeptoLab’s two Cut the Rope games have been downloaded 250m times and have 50m monthly active players, while Rovio’s Angry Birds series has 1bn downloads and 200m monthly active players. Both companies have used this popularity as a springboard into TV, funding their own animated shorts for distribution digitally and – maybe – through broadcasters.

Producers, broadcasters and Hollywood studios are eager to follow suit: to launch new characters and stories as apps and then bring them back to TV.

Disney has already seen success with its Where’s My Water? games, which introduced a character called Swampy the Alligator, and raced to 100m downloads in their first year. Swampy, too, is getting his own series of animated shorts.

Cartoon Network has similar ambitions. “I don’t think everything has to be created as a show,” said Stuart Snyder, president and chief operating officer of Turner’s animation, young adults and kids division, in his MIPJunior keynote.

There are two main challenges for this strategy. One is the ferocious competition on the crowded app stores, where building the next Angry Birds or Cut the Rope is phenomenally tough, even for a Disney or Cartoon Network.

Another challenge is the fact that these stores offer direct distribution for producers and app developers, albeit with the same competition hurdles.

For example, Glynn Hayward, creative director of UK studio Complete Control, talked about his company’s launch of Roodie Noodie characters as apps, rather than pitching them to broadcasters. “We didn’t have a natural home for it until the App Store arrived,” he said.

IP ownership has always been a live issue for broadcasters and producers, but it’s becoming even more important in the digital domain. Both ZeptoLab and Small Potatoes creator Little Airplanes suggested that it’s crucial for independent firms to hang on to their IP.

“Keeping control of IP and being in charge of our own destiny is very important. We have direct access to an incredible amount of consumers… I think now it would be foolish to give up on your content ownership,” said Misha Lyalin, CEO of ZeptoLab.

He was backed up by Little Airplanes’ Josh Selig, which has seen Small Potatoes go from a pre-school TV series to a teenage girls’ craze on Facebook. “If you hold on to your IP, you can riff with your IP,” said Selig. “You can play, you can experiment. This is the best time in history for experimenting with IP.”

Budgets and funding continue to be a hot-button issue though. Independent children’s TV producers are dreaming up innovative digital content for their new shows at the pitching stage, but fretting that broadcasters won’t up their budgets to pay for them – including in the UK, where indies are worried that upcoming tax breaks for animation producers will simply spur more cuts to broadcasters’ acquisition budgets.

YouTube’s Original Channels initiative, which invests in producers’ channels of original content for YouTube as an advance against future advertising revenues, may provide an alternative funding source.

The thought of talented animation producers turning to YouTube rather than the Cartoon Networks of the industry to fund their new stories will give those broadcasters some sleepless nights, or at least ensure they deliver on their promises to shift their rights demands a bit more in favour of producers.

One final theme of MIPJunior, and perhaps the most important, concerns the expectations of children in the digital world.

“As the devices that deliver television get more powerful, the expectations from the audience [for interactivity]are going to go up,” said Microsoft’s Josh Atkins, during a session demonstrating the innovative Kinect Sesame Street TV project, which uses a camera and voice recognition to have children and characters interacting.

“Kids are very savvy when it comes to digital, and they have very high expectations,” agreed Wesley ter Haar of MediaMonks, reminding producers and broadcasters that digital content and apps based on TV shows “must have the same kind of production and storytelling quality as the parent show.”

It’s an exciting time, though, not least because all these digital platforms are enabling broadcasters, producers and app developers to have a much more two-way relationship with their audiences/users/fans (the correct terminology is itself up for debate in the digital world).

If one overriding theme at MIPJunior was the necessity of being on all the different devices that children are using, another was the need to encourage, respond to and act on their feedback as much as possible.

“To make a successful TV programme for digital kids, we believe you need to make it not just for the kids, but with the kids,” said Lizzy Nash, executive producer at The Feds. “Listen to them. While it may take a leap of faith, don’t be afraid to let them drive the show.”

Or the app, or the website, or the YouTube channel…
Watch the highlights of MIPJunior & MIPCOM’s conferences

& more details on the above sessions & more, in our MIPJunior & MIPCOM liveblogs. Enjoy!