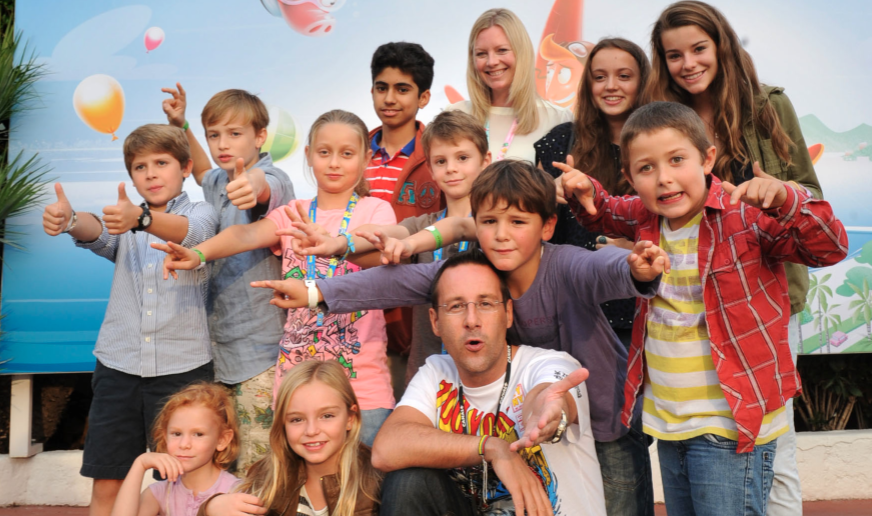 Photo: the jury, with Kids’ TV presenter Billy (front); and that’s Debbie at the back!

The MIPJunior Kids Jury Awards took place yesterday at the Martinez Hotel, with a select group of children from the International School of Nice voting for their favourite shows.

115 Producers entered their programmes, which were divided into 3 categories – Tweens (11-14 years), Kids (7-10 years) and Pre-school (3-6 years). The criteria for entry are simply that no broadcaster should be attached.  The winners announced not only take away the coveted award but get a one-on-one meeting with key buyers during the conference, editorial coverage in the MIPCOM Daily News and here on MIPBlog (!) and free entry to next year’s conference. They’re also honoured at an awards ceremony, in front of the MIPJunior delegation.

I attended the judging sessions and was interested to see the kid’s reactions to the properties which included both live action and animation in every category.  Working in this industry, we all claim to know what kids are tuning into and I wanted to see if we’re all getting it right!  What I found most interesting from all the kids and tweens jurors was that animation is not on their viewing list…

On this Jury, as early as 7, the girls had abandoned this genre and moved onto a more aspirational live action offering.  And, whilst the boys will stay with this genre for longer, they’re turning to movies and other forms of media in search of entertainment (gaming, internet etc.). If they do choose animation they want it to be funny. One 14 year-old juror commented “if it’s a cartoon then it needs to be funny or there’s no reason for it to be a cartoon”. And if you look at the schedules, most of the big ratings drivers tend to deliver on this.

The Tweens are just not watching kids TV anymore at all.  The children that I spoke to (both boys and girls) have moved onto other channels and MTV in particular is a favourite for the girls.  They want to be immersed in stories and this bears out with their winning choice for the Tweens category, which was Jalpari – The Desert Mermaid from Ultra Distributors in India.  The kids were engaged and eager to see more of this feature film’s trailer and were visibly disappointed when the show reel was over. The narrative held their attention and they wanted to know more about this enchanting Indian adventure. The other entries, Chilli Girl (Domo Animato – Columbia), Monster Mountain (Dancing Digital Animation – China), One and a Half Heroes (Fantawild Animation Inc – China) and The Eternal Song, Jazzit II – Zhejiang Dishun Tech Co, Ltd – China) caused little excitement because they just didn’t hit their target demographic as they just aren’t there anymore.

The Kids category was won by Chilly Christmas from Crystal Sky Worldwide Sales in the USA. The combination of kids and dogs seemed to be a winner for them, with lots of funny moments to entertain. Again, a live action winner. A Cautionary Tale from ABC Commercial in Australia was beautiful and I longed to see more but, again, the mere fact that it was animation was a turn off for the kids.  And as we moved onto Me and My Robot from Millimages and Sendokai Champions from Nottingham Forest Media Advisors in Spain I could tell that we were onto a losing battle to hold their attention. Interestingly, when Dr Greenies Mad Lab from Positive Productions, Inc in Canada was shown, the Tweens stopped what they were doing at the back of the room and showed interest.  This madcap show seemed to work for them as it made them laugh and featured real people.

The pre-school category is such a difficult one to get right, as a pre-schoolers development is unique to the individual. The shows featured were an eclectic array of titles and I was interested to see which one would hold their attention. Baby Geniuses/Baby Squad from Crystal Sky Worldwide Sales (USA) was just too old for them and I could see this visibly on the children’s faces.  Particular jokes that made me laugh were too complex for the jurors and they didn’t react in the same way. Big Block Singsong from Bejuba Entertainment in Canada had very catchy tunes and I and several other adults in the room were tapping our feet but the kids just shuffled in their sets. Tom and Keri from Yellow House English Ltd in the UK achieved the same reaction. Mini Wolf from Genao Productions in France seemed to me to be a potential winner as the simple storyline and charming animation engaged the pre-schoolers.  However, the winner, The Airport Diary from DPS in South Korea & Harbin Pinggo Culture Media in China, really charmed the kids ; and the fact that nobody understood the word “constellation” didn’t seem to deter them from making this show their winner!

So what can I deduce from this Jury?  Today’s kids are media-savvy, spoilt for choice and get bored easily. If a show doesn’t reach out and grab them within a minute or two, they don’t hesitate in switching over. They’re moving onto non-traditional forms of entertainment very quickly and watching shows that we wouldn’t normally categorise for them. I wasn’t entirely surprised to hear one pre-schooler declare his favourite characters to be Finn and Jake from Adventure Time. He was 5 years old! It would appear that the old industry saying “KGOY” (kids growing older younger) is certainly relevant to these hard-to-please jurors: and it’s up to us to keep up with them.

Debbie Macdonald is a Kids TV consultant and regular contributor to MIPBlog. She participated in the Kids’ Jury as an outside expert. Follow her on Twitter here!