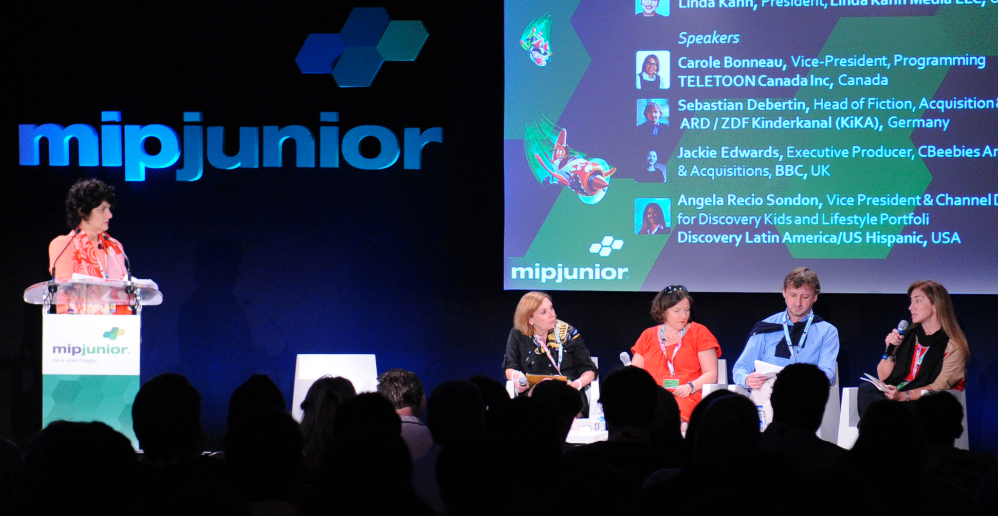 Liveblog: What do MIPJunior Buyers Want?

What are CBeebies, Discovery Kids, KiKA and Teletoon Canada looking for from production companies?
By Stuart Dredge on October 6, 2012 0 Comments

What do buyers want in the children’s TV market? It’s what every production company wants to know in and around MIPJunior. A panel session this morning provided some answers, with four buyers from around the world explaining what they’re acquiring, and what trends they’re seeing in the market.

The session was moderated by Linda Kahn (far left), president of consulting firm Linda Kahn Media. “It’s really clear that kids live in a multi-platform world,” she said by way of introduction, before noting that the theory of children being “digital natives” has evolved.

“The next generation are really touchscreen natives. They play and learn in a world of smartphones, iPad and tablets,” said Kahn, zeroing in on the question of how broadcasters are adapting their acquisition strategies against that backdrop.

First, some information on the networks. Teletoon broadcasts in French and English language, targeting children during the dqy, and families/adults after 9pm. 60% of the content on its main channel is Canadian, and it has also partnered with Turner to launch Cartoon Network in the country.

CBeebies has around 2.4m children watching it every week in the UK on TV, with a thriving website and radio station too. Its Cinderella pantomime attracted 1.2m viewers last Christmas – its largest ever audience for a single programme. Meanwhile, the website has peaked at 1m unique weekly users, and there’s now an app available too.

KiKA is a joint venture between ARD and ZDF, with one channel targeting children of all ages. “We try to make use of all the other possibilities that are out there nowadays to differentiate between the youngest, 6-9, and the oldest ones,” said Debertin, explaining that KiKA’s website is the key plank in this strategy, including free video-on-demand.

Finally, Discovery Kids is the biggest pre-school channel in Latin America, broadcasting in Spanish and Portugese for 2-6 year-olds, with four feeds for the whole continent. Its content is also made available online and within apps. The content is about 70% acquisitions versus 30% commissions and co-productions.

How are children changing their consumption of media in these territories? Sondon said that in Latin America, the popularity of broadband and apps varies. Mexico and Brazil are leading in this respect. “Kids, especially pre-schoolers nowadays, do have so many touchpoints in how they can interact with the brand electronically,” she said.

“TV consumption is still very high for our sector, but it’s that interaction where they’ll watch the show on the television, then they’ll wanna go online and play games with the characters… What we find is the greater the ability for touchpoints, the greater the popularity of the character. You can’t miss something that you don’t know…”

Debertin noted that Europe is a hugely varied market in terms of consumption trends for children, but he agreed that it’s important for TV channels to adapt to the proliferation of broadband and mobile/tablet devices.

But he warned producers not to get blinkered by apps mania, since not all children have access to the necessary devices. “Is your project really something that from the beginning should have an app? Should you think about creating something first like a web offer for pre-schoolers?” he asked.

“Children are consuming media in so many different ways it makes my head spin!” added CBeebies’ Edwards, noting that even simple web games – Mike the Knight Pairs, for example – are doing “phenomenal numbers” on the CBeebies website. She agreed that what websites and apps are great for is building TV shows into well-loved brands.

Bonneau talked about the sources for content, starting by listening to the audience, and understanding what kids are looking for.

But she talked about something called Têtes à Claques, which started as a hugely popular series of web clips, before being developed into half-hour episodes for TV in partnership with Teletoon. “This is an example of something that came from the web that we developed into a television series,” she said.

Discovery Kids turned an ident character called Doki into a series, while CBeebies debuted its The Lingo Show on its website, before taking it to TV. “Something we’ve got to be smarter about is… developing projects from a multi-platform point of view from the start,” said Edwards. “Being smart about use of assets, and how we’re designing our pipeline.”

For example, for the Tree Fu Tom series, a set of interactive games were part of the production pipeline from the start, rather than being developed after the TV shows had been made.

The panel were asked at what stage they prefer to see a new project. “I would say you come with your idea, and if it really fits with what we’re looking for which is right now comedy, 6-11, boy target… if it’s original, you’ve done your homework and it’s what we’re looking for, come and see us,” said Bonneau.

What about rights, though? CBeebies needs exclusive broadcast rights in the UK, but is “agnostic” about licensing and merchandising rights in the case of an acquisition. And Edwards said she’s happy to have “a quick conversation” about big ideas with production companies early in the development process – just in case CBeebies is already working on something similar.

Debertin agreed with Edwards on the ‘not grabbing too many rights’ front. “I want to establish relationships that are lasting longer than just one production,” he said. And KiKA is currently producing a 26×22 series that he says was commissioned based on a “five-line pitch”. So KiKA also wants to see ideas early.

Sondon said that Discovery Kids is currently looking for shows aimed at 6-9 year-olds, while Edwards said that CBeebies thinks very hard about how to apportion its budget. Not least because there isn’t much of it. “CBeebies is a big brand with a really tiny budget, unfortunately,” she said.

How important is the educational curriculum for these broadcasters? CBeebies has traditionally focused on “learning through play”, although it does have a new, more educational block of programming. Edwards advised production companies that they need to have “the right people attached to the project” as advisers, if they’re focusing on curriculum-based content. Experts, in other words.

Sondon said curriculum “isn’t just about letters and numbers” – it’s about social development, art and music, movement… “We do work with child psychologists and educators who guide us,” she said. “We don’t want to bore kids. It’s always about learning in a fun way: they don’t even realise they’re learning.”

Predictions for the future? “The kids are gonna tell us what’s next,” said Bonneau. “I don’t think TV’s going to go away. Kids love watching television. But you need to make sure you create that environment and you are present everywhere they are.”

How about phenomena like Angry Birds and Talking Tom Cat, which started as hugely popular apps with hundreds of millions of downloads, then set their sights on TV?

“We always look for great ideas from wherever, and apps are just another source of ideas,” said Edwards. “Whether you should or should not extend it to television will depend on the strength of the concept of that app.”