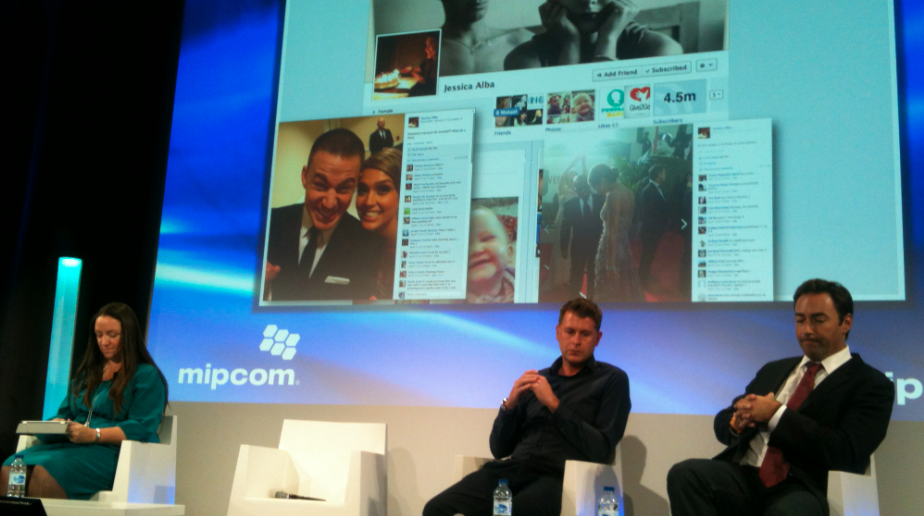 Major executives divulge secrets to driving traffic from the 2nd screen to the first.
By Angela Natividad on October 9, 2012 1 Comment

“Last week we announced 1 billion active users. Half log into Facebook every day,” she said, establishing in two sentences the interest for broadcasters and content creators to be present and active on the site.

“Our mission is to connect the world, and now roughly half of the world’s internet population logs in every month.”

Connections are incredibly important for people, which is why users live on Facebook but also why Geci comes to MIPCOM, she said: “Content creators fill the newsfeed with incredibly engaging stories,” and if MIPCOM is anything, it’s the crossroads where stories are marketed, refined and sold.

When Facebook launched 8 years ago, one of its fundamental principles was ensuring users created accounts with their real names. It wanted to coin identity. “And it’s more focused than ever on knowing who its audience is,” Geci said. “600 million users are on mobile, and Facebook is the most downloaded app on all major app stores.” In other words, app developers can leverage the fact that people never log out on their smartphones, making them accessible to great content at all times.

– Leverage your assets. Jessica Alba liveblogs from the Golden Globes, and those “blogs” are the only ones that come out from inside the ballroom — meaning viewers get engaged in new ways. Do what this star does: leverage your strengths to bring users more of what they want.

– Embrace more social TV. 62% of Facebook users watch TV while connected, so use their plugged-in interest. ESPN uses Facebook to crowdsource content, and Glee runs a weekly competition for Gleek of the Week; the winner gets credited on air.

– Optimise for social discovery. Don’t just create quality content; ask yourself how people are going to find it.

– Think beyond the Like. There’s more to being great on Facebook than hoarding as many Likes as you possibly can; produce a content experience that suits and fully engages Facebook users, drawing them back regularly. A Like on your brand page, on the other hand, is just a one-time shot.

– Maximise your connections. Get to know your audience better and focus on populating Facebook with “great additive content for your shows”.

“Every device is required to be supercharged for our audience,” said O’Ferrall. “Our audience is absolutely connected on all devices … we need to make sure we’re there, providing an interaction.”

So how does it do it?

Driving engagement via gamification is a big component, which is why being able to vote on all platforms — including Facebook — is crucial to the EMAs’ success. “Using innovative partners is key to our success from a digital media perspective,” he said.

Speaking of innovative partners, Viacom also uses Twitter to gauge which artists generate the most discussion so they can better drive it.

The creation of social media moments plays a big role, too. For the talent lineup alone, Viacom asks the following questions: “Who are we going to have in the show? Who’s gonna present? How big is their social media following? How relevant are they to our audience?”

Finally, there’s the importance of second screen. Geordie Shore was the highest-rated TV show in the UK recently because its cast engages directly with people on Twitter and elsewhere. It’s all in keeping with ensuring users are served cross-platform.

“Supercharge across platforms,” O’Farrell repeatedly emphasised. Today at Viacom, “sponsors expect us to deliver on touchpoints across every platform. We’re doing that now” — and the effort drives new opportunities as well as improving TV ratings.

Hispanics over-index in social, mobile and video: they spend 73% more time on social media than the rest of the American market. They also possess smartphones in higher percentages and spend 50% more time watching videos on them.

So creative evolution was a necessity, not an option. “At Telemundo we had to ramp up really quickly on social storytelling, or else lose a sizable chunk of our audience,” he pointed out.

To crack this nut, Telemundo acknowledged that the industry’s “definitions of audience and tune-in have fundamentally changed.” “Audience” now includes includes “collaborator” and “promoter”. And you’re “tuning in” to real-time tweets, scripted Facebook and Pinterest experiences, Google Hangouts with stars, and on new platforms like mobile, video on-demand and gaming.

Here are his keys to success:

“Some of those up and coming talents are not so up and coming anymore,” thanks to followers on social networks and highly active mobile users, he said.

– Sponsors ignite stories. “We work with sponsors not just to be on the sidelines but to ignite those stories … to help connect with the audience in new and innovative ways,” Blacker said.

For example, in one telenovela it developed a storyline that deeply involved sponsor Chase.  A powerful cliffhanger, which hinged heavily on a Chase product, carried the conversation over into social networks.

– Writers without borders. At the story inception phase, it’s crucial to get TV writers excited about social, “and specifically to write storylines that play out on those platforms,” Blacker advised.

For telenovella La Reina del Sur, one segment included questions from audiences on social networks. The audience-generated element was also emphasised because the hostess actually used an iPad to read them aloud.

“That whole segment actually became as popular as the finale of the novella,” he said.

– Studios harness buzz. “We are constantly looking to see the link and connection between ratings,” he acknowledged, “but we had an exciting opportunity this past year when we took our novella awards from 2011 and worked with our studios to create a prime-time show.”

The Premios Telemundo Novellas were created in 2011 and produced completely as a result of audience input. It was conceived on numerous digital platforms and even had a hashtag: #premiostumundo.

Awards included best slap, best villain, and other categories that can really only exist in the exaggerated but engaging telenovella universe.

“Not only did we harness that social buzz, but by specifically answering a specific need that audiences asked for, we drove huge traffic to TV!” he triumphantly concluded.

“It all comes down to really great ways, not just to create a story, but to find out what it’s gonna play on.”

The session concluded with a short QA, at which time this author asked panelists whether there are concrete ways they can describe in which Facebook and Twitter are used together.

“Find a way to contribute content consistently so that fans can expect them,” Geci advised.

But perhaps O’Farrell replied most presciently. “Don’t use social media as marketing — that’s the key point we make in our business. Social media isn’t about marketing, it’s about engagement. And for our business, engagement is revenue.”

That’s why it’s so important to be where audiences want to be served.