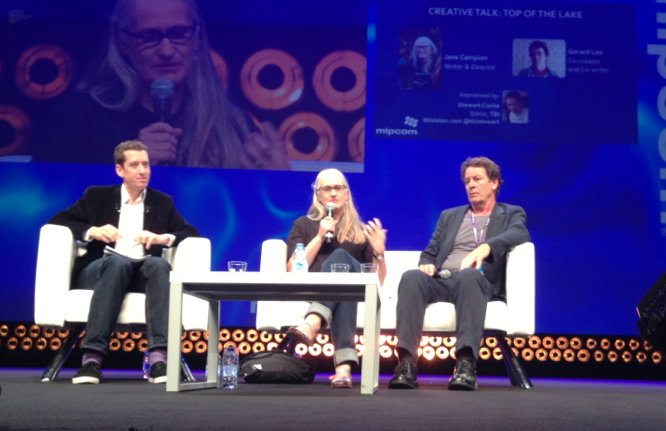 Liveblog: Jane Campion: ‘Everything Ends Up on TV’

Top of the Lake co-creators Jane Campion and Gerard Lee on why TV beats film for character development
By Angela Natividad on October 9, 2012 0 Comments

Top of the Lake is a crime story with the slow-moving, seductive swagger of a drama. Its plot declenches around the mysterious pregnancy and disappearance of a 12-year-old girl, who consequently reappears chest-deep in the lake of a town called Paradise. Protagonist Elizabeth Moss arrives to solve the case, only to find that her life is inexplicably connected to the events in Paradise.

“I’ve been dreaming of writing… what is basically a mystery detective story,” said Campion. “The story is designed to really bring [Moss] to her knees.”

But what’s most unusual about Top of the Lake are “the textures we’ve brought into this wilderness area in New Zealand, which is sort of like the end of the world.” In Lake, Paradise is a sleepy tourist town coveted by people Campion repeatedly called “the patriarchy.” The setting contrasts to those of high-octane crime dramas like The Wire.

Asked by fellow liveblogger Stuart Dredge whether activity on social media affected their long-term plans for the show, Campion plainly stated, “I have a Facebook account. In fact, I don’t like all that stuff.”

What worries them, in the end, is the financial and creative constraints, coupled with unreasonable demands, that caricature online content production for media firms. During the session, Campion confessed, “What’s important for me is the chance to make something amazing. If I think the budget or time isn’t sufficient, I don’t want to do it. It really scares me to make crap, or something that just can’t be achieved.”

She elaborated on this sentiment in reference to Lake. “I feel like it’s our job to be compelling, to try and tell our stories in such a way as to seduce the audience… to create a mystery that is intriguing and powerful enough and emotional, as well as funny.”

“Jane had been watching Deadwood and realised what freedom is available now in TV as opposed to film,” Lee explained. “There’s usually a producer telling you what to do, and budget restraints. The world of TV, and the length of the series, allows you to be creative.” He acknowledged it’s a luxury.

“Feature film can be quite conservative,” Campion agreed. “I love novels, and I love to have a long relationship with characters.” But in a way, Top of the Lake benefits both from the luxurious lengthiness of TV, coupled a shorter planned run than most series.

“It’s a story that starts and ends over that six hours,” which changes the investment for users, said Campion.

Lee acknowledged the producers were worried about the approach. They wondered, “What if people think this is a film?”

“I think they might have been joking,” said Campion.

“There could be scope for another series” if not necessarily a season 2, Campion said thoughtfully. “We joke about what it could be … but I have to say [directing for TV]an incredibly hard job. My passion and sympathy goes out to TV directors — you’re really working under conditions where everything just goes so fast!”