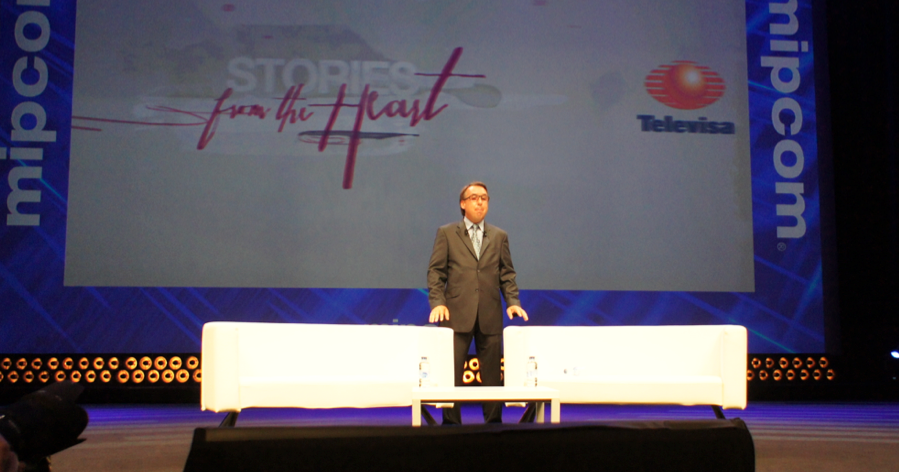 The Grupo Televisa CEO imparts his vision of storytelling everywhere the user is
By Angela Natividad on October 10, 2012 0 Comments

Emilio Azcarraga Jean, MIPCOM 2012 Personality of the Year, began his career at Grupo Televisa at the age of 29. And if Televisa, as he fondly calls it, didn’t grow up with Azcarraga Jean, it certainly did evolve alongside him. Under him, Grupo Televisa has become the leader of content in the Spanish speaking world, producing 80,000 hours of programming per year.

Azcarraga Jean arrived onstage to admiring applause. He began his keynote speech by saying that engaging with people, and keeping them informed 24/7, is his life’s dedication.

“My grandfather told me that a good story can enchant the word.”

In the case of Televisa, which launched in 1930 as a radio broadcaster and has been in the TV business for 50 years, its archives contain “thousands of stories.” Tone and production can be dated, “but their essential story lines, primal hook and raw emotion are timeless,” said Azcarraga Jean.

He then talked in broad strokes about Televisa’s current conquest of the entertainment market. “We’ve made foreign coproductions a top priority… we have fine-tuned our engaging formats to local needs and tastes. The outcome is always a product that is distinctly different and yet loyal to the original.”

You can imagine that most of these stories are in telenovela format, but that isn’t a fact Azcarraga Jean shies away from. “Stories must keep viewers on a ledge, surprise them. Perhaps that is why telenovelas are the only TV genre — since its origins over 50 years ago — that has never decreased its ratings,” he said.

“Our goal is to make truly powerful and truly global formats, because melodrama is by nature global and universal.”

To illustrate, he provided a universal example. “If I tell you a story of two teenagers, one rich and one poor, who are crazy about each other, with families who want to keep them apart, you will probably think of ‘Romeo & Juliet’. Or of one of our classic stories from the ’80s.”

Gripping melodrama relies heavily on storytelling, as well as knowing how to design a production for a specific medium and target, something he believes Televisa does best. Its goal is to “generate the best and most emotional content, and distribute it to every mass medium. And since everyone wants to have content literally in their hands, Televisa has moved to meet the need.”

“We count not only on our investments but also on our standing commitment to creativity, innovation and customer service. We are now perceived as a serious competitor” to the country’s biggest mobile provider, Azcarraga Jean said.

And it hasn’t stopped there. Televisa’s show-oriented apps have generated millions of downloads, and an aggressive presence on Facebook and Twitter has ensured that four of Mexico’s top 10 Facebook pages are for Televisa-owned properties. (As for Twitter, Mexico is the 5th most-active community, so you can imagine the influence the network has there.) And alongside Britain, it will soon launch SharetheMatch, a social network for soccer.

“We were a multimedia company before the concept even existed. Now we’re designing formats with multimedia ingrained in their DNA. We want to stay in the front lines … and we want to be the best possible partner,” Azcarraga Jean said, circling back around to his first point: co-production is a top priority for Grupo Televisa, clearly among many.

He elaborated on this during a question and answer session with an admiring Anna Carugati, of World Screen. Asked about the growth opportunities he’s looking at, he pointed to some co-productions Televisa organised with China and France.

“Obviously, with the United States, we have our hands full. Europe is also very important. Europe is in a very big slump, but everybody needs to work together so the world can get out of this slump.”

Finally, asked about whether he worries about the growth of Netflix and Hulu, he simply replied, “They’re distributors. If you have good content, you have a very good alliance with the distributors.” Televisa already works with Netflix. Jean considers them “very good distributors of content to their audience.”

He finished by remarking, “I don’t know which device is gonna be there in the future. But at the end of the day the person will want their entertainment whenever they want and wherever they want. We need to be prepared to deliver that.”