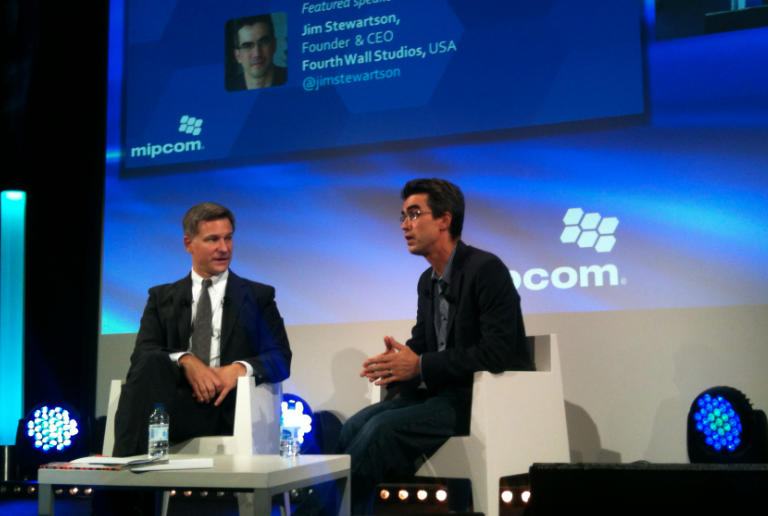 Aided and abetted by convivial moderator Robert Tercek, Fourth Wall’s Jim Stewartson introduced us to his project of the moment, rides.tv. The platform, dubbed an “interactive video experience,” most notably hosts the Emmy award-winning “Dirty Work,” an interactive comedy series about a cleanup crew.

On rides.tv, users have the option to watch the show in “full mode” or in “lite mode”. If you choose the full experience, the story is delivered “beyond the screen”: characters can send you an email, or call you on the phone, lending the impression you’re part of the action while watching.

Stewartson believes no one is able to watch a show without compulsively accessing a second screen. “I cannot watch my favourite show ‘Breaking Bad’ without three devices happening at the same time. The problem is, those guys can’t programme these devices.” He stays occupied with Bejeweled or email, he says, simply because he can.

That was part of the logic behind rides.tv, which Tercek teasingly called “programming for people with ADD.”

He carefully detailed why it’s so hard to programme for multiple screens. In the past, the entertainment industry took traditional entertainment formats — like TV and movies — and simply tried to plug them into new distribution systems. In short, they expected people to watch “Spiderman” from their phones, which aren’t really built for the immersive cinema experience a film demands.

“These systems are not designed to work together,” Stewartson pointed out, “and that’s why no one can program these things at the same time. But the behaviour is that people are making them work together.”

As a result, Fourth Wall creates stories on a timeline, then enables the transmission of its parts across multiple systems through rides.tv.

“We figured out emails are really fantastic for the beginning of a chapter and the end of a chapter” because email is good for comparatively big messages, Stewartson explained. “That’s just the way email is. [Users] want it to be really important because we’re spending time on it.”

This is opposed to a text message, which is best for transmitting messages in short bursts. “It’s sort of like a trumpet blare: it’s something you’re gonna pay attention to, then it’s gonna disappear” as soon as your attention shifts.

As the session wound down, Stewartson talked at length his studio’s invention of the alternate reality games (ARG) format. In short, ARGs send people out into the world to solve puzzles for a plotline in a totally separate gaming reality.

Tercek interjected to give an illustrative shout-out to I Love Bees, Stewartson’s most notable ARG project and perhaps the first ARG in modern memory.

Commissioned to promote Halo 2 and produced by his last studio, 42 Entertainment, the game kicked off in a Halo ad at a movie theatre. The ad included a URL so tiny that only a handful of people, who were pirating the film illegally, were able to find it. From the discovery of the site, I Love Bees stretched into a phenomenon that mobilised over 500,000 players. They traveled in roving groups to solve riddles, answer payphones, or receive faxes in arbitrary places across the United States. One couple, who met on the journey, got married in a payphone critical to the game’s plot.

“We used to do these big, long experiences for people, but the trouble is there are only so many people who’ll go into the desert to answer a payphone,” Stewartson acknowledged. “Which is something we did, and something that, like, 12 people on the internet [still]think this is the coolest thing ever invented.”

rides.tv’s roots also spring from this realisation. It is structured the way it is “so we wouldn’t have to completely outdo ourselves every time” — an expectation that couldn’t be sustainably satisfied after I Love Bees.

“We wanted to create a system that was much more user-friendly, so we called it ‘rides’. As in amusement park rides: it’s really really fun, and then it’s totally over.”