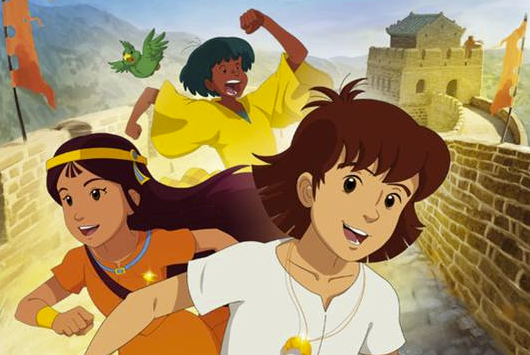 What shows are at the top of Kids TV consultant Macdonald's hitlist? Read on...
By James Martin on September 24, 2012 0 Comments

As the kids TV industry makes its annual pilgrimage to Cannes in search of the next big thing, there seems to be a sense of optimism in the air. With the UK government’s announcement that they’ll be awarding up to 25% tax break to animation from 2013, there is a buoyed confidence amongst producers, with new ideas being generated. British pre-school is world-renowned and, just when I thought the ship was going to sink, it’s refreshing to see that this genre is having a bit of a renaissance. Pre-school programming is a real passion of mine, so I’m excited to see many series in this genre making their debut at MIPJunior this year.

Toby’s Travelling Circus (52 x 10 mins) from Kommix Entertainment follows the adventures of a 7 year-old boy who runs his own magical travelling circus. This stop frame pre-school series has already been commissioned by Channel 5 for a second series prior to its launch and it’s easy to see why.  I’m a huge fan of stop frame animation and the producers, Mackinnon & Saunders, are world renowned for their excellence in this field of animation. In recent times, stop frame has become a bit of a dying craft as its incredibly cost prohibitive, so I’m really excited to see this show in production.

Sarah & Duck (40 x 7mins), from Karrot Animation, is also making its debut at the market this year.  With Cbeebies as the worldwide broadcaster, the series follows the adventures of 7 year old Sarah who lives with her best friend, Duck.  Together they embark on exciting adventures in their own imaginative way, discovering the world.  This beautiful 2D animated series was the toast of success at Cartoon Forum in 2010 and I’m delighted to see this show finally going ahead.

Again, on the pre-school bandwagon, Ireland’s Sixteen South has created a beautiful mixed media series entitled Driftwood Bay.  I love the history to this series which was created by children’s artist, Joanne Carmichael. She created the characters from items that she found washed up on the beach outside her cottage on the Scottish Island of Arran. Hence, a show was born. Driftwood Bay is a special island that exists in the imagination of a little 5 year old girl named Lily who creates a world of adventure and friendship from different treasures she finds washed up on the beach. This 52 x 7 min series will premiere late 2013.

And whilst new ideas are being generated in pre-school, nostalgic programming seems to be the order of the day in older animation.  In a risk-averse climate, there appear to be many returning series and remakes as opposed to new titles. Zodiak Kids has recently announced the revival of Totally Spies, with season 6 launching at the market, following on from the success of the show on TF1.  This series has already spawned 156 episodes, making it the longest-running French animated series to date. In addition, tapping into the trend for nostalgic programming, old favourites are returning for a new generation of kids with the Teenage Mutant Ninja Turtles from Viacom, Power Rangers from Marvista and now, Mysterious Cities of Gold from Blue Spirit Animation (photo). This announcement piqued my interest as it was a real favourite for my generation, with a great theme tune! However, what’s really interesting about this particular remake is that it returns with brand new stories. So, not only will it appeal to today’s kids, it will also appeal to fans of the original.  A lot has been written about co-viewing in the modern home and I’m sure this will appeal to families who are looking to bring different generations together in front of the TV.

There seems to be a continued trend for monsters and magic and 2 titles have caught my eye recently.  Mighty Mighty Monsters, from Bron Studios in Canada, is a 3D animated series revolving around a group of too-cool-for-school monster kids (Frankenstein, Dracula, Wolfman). They’re expelled from monster school and sent to a human immersion programme at a normal comprehensive and faced with terrifying tween culture.  It’s a great premise and the comedy comes from the clash between normal kids and our monsters. Two 44-minute specials have been announced, and they’ll be closely followed by a series.

In addition to this, brand new fantasy action drama Wolfblood (13 x 30 mins) from, CBBC and ZDF, is sure to appeal. This live action series tells the story of two seemingly ordinary teenagers, who are secretly part of a mysterious race who have lived amongst us for centuries, disguising their abilities and blending in. Hot on the heels of the success of Twilight, you can see what inspired the creator.

It’s really refreshing to see that all the above series have lead broadcasters attached to them as recent years have seen a demise in both production and commissions. Maybe MIPCOM will offer signs of a recovery in the children’s sector with a renewed passion for the craft felt throughout the Industry. And as I sip my glass of rosé on the Croisette, I for one will be hoping so.

Debbie Macdonald is a children’s media consultant. This year, she is partnering with the MIPJunior Kids Jury, to give her expert input to the proceedings in Cannes, from October 6, and here on MIPBlog the next day.

Macdonald was formerly VP, programming director at Nickelodeon UK, having worked in acquisitions at the BBC. You can find her on LinkedIn here.