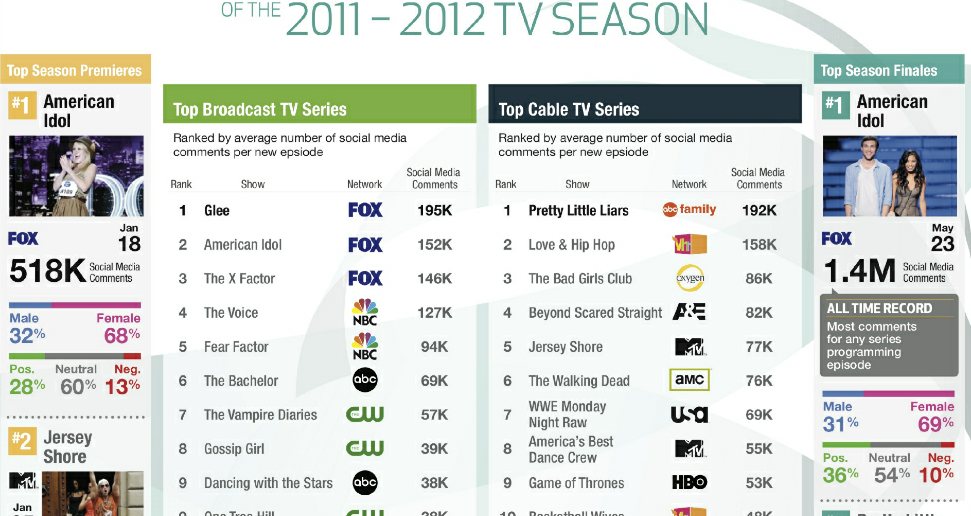 Our very first digest of the past weeks' hottest news stories, as curated via our scoop.it web magazines. Enjoy!
By James Martin on June 25, 2012 3 Comments

And so, there you have it. The first ever full season of US TV charted in a totally new way: via social media. So new, in fact, that most of the figures in Bluefin Labs’ above infographic can’t be compared with the previous season, as the tracking didn’t exist then.

Still, some telling trends emerge: Music shows come out tops in terms of social commentary (mainly tweets), be they American Idol, The X Factor or Glee; and series from smaller networks such as CW (Gossip Girl, The Vampire Diaries) AMC (The Walking Dead) and HBO (Game of Thrones) all did well this season. Overall, Fox is confirmed as the most social TV network, thanks to the aforementioned music shows; but MTV is close behind, due largely to the Jersey Shore juggernaut. Welcome to the new age of audience measurement?

BSkyB was also at the centre of industry attention this month, and nothing to do with the Murdochs: Sony Pictures Television signed a multi-year deal with Sky Deutschland, giving the pay TV operator first dibs on films such as the Men in Black series. Just before that, Miramax announced a similar deal with BSkyB, giving Sky exclusive rights to numerous Miramax films, including Academy Award-winning Life is Beautiful, among others. It also emerged that disruptive US streaming company Netflix, which recently launched in the UK, has set its sights on outbidding Sky for top movies in the UK. They should consider themselves warned!

Yet more UK innovation came as 2screen phenomenon (and MIPCube speaker) Zeebox announced its plans to “shake up social TV in the US,” as TechCrunch put it. And the long-awaited Google TV’s UK launch was finally confirmed as imminent with the release of a new Sony internet TV player. But as The Next Web pointed out, the move comes a year after Google’s Eric Schmidt said it would…

Finally, multi-platform creativity went from the sublime to the ridiculous. Disney quietly revealed it was testing its own app for in-theatre film check-ins, reported The Appside; Microsoft‘s revealing its very own wannabe iPad-killer was keenly watched by all those who know, as MIPBlog reported last week, that tablets are rapidly emerging as major video consumption devices, already surpassing PCs.

As for the ridiculous: after Angry Birds, another smartphone app earned its own TV show: Draw Something, the addictive (yet flash-in-the-pan) Pictionary-for-iPhones, is due to hit the small (yet larger than a smartphone) screen as – you guessed it – a game show. Less predictable is the fact CBS has bought the pilot from the company of Ryan Seacrest, the presenter of American Idol.

Which pretty neatly brings us right back to where we started!

All of the above links come from our new scoop.it magazines, which gather TV industry news from the world over: