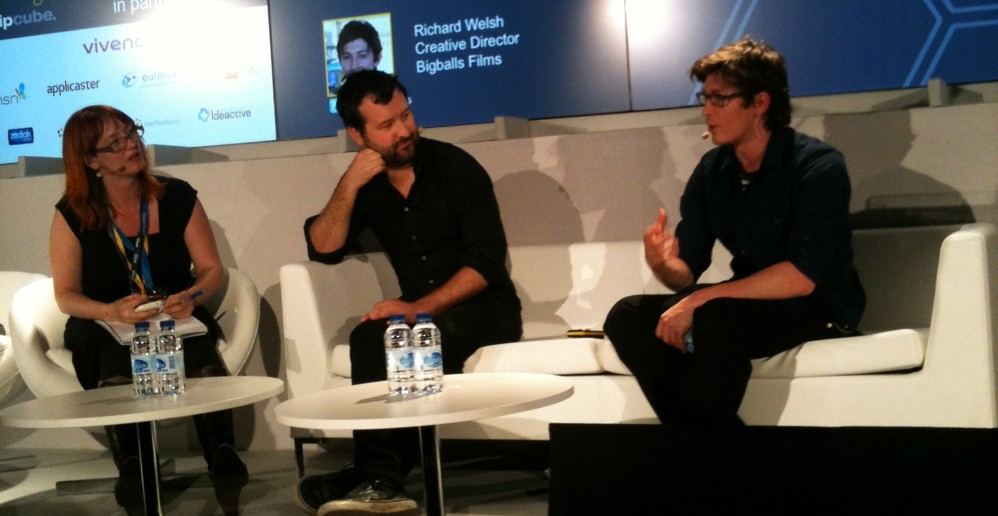 The creative director and "web-friendly director" talks about pet projects and how new ones are born.
By Angela Natividad on April 1, 2012 0 Comments

On stage yesterday, Asta Wellejus of Die Asta presided over a colourful panel between Vincent Morisset and Richard Welsh, whose creative work has raised the bar for storytelling, across all platforms.

Welsh began with examples of the “social entertainment” he’s worked on with his company, Bigballs.

“We’ve based a lot of our work on this philosophy of thinking by jumping. If a new platform comes out, we don’t think we should be talking about it unless we’ve tried it,” he explained.

To illustrate, he talked about Freedom, a site on microblogging platform tumblr.com, wildly popular with youth who “reblog” everything from music to imagery. Freedom is based on the work of Israeli YouTube mashup artist Kutiman.

“He takes existing YouTube videos and remixes them and turns them into new songs,” said Welsh. “We wanted to do something that moved beyond YouTube, that could maybe be a documentary series that involved the audience.”

A second project, I AmPlayr, is a multiplatform social game based on the fantasy of imagining yourself in the shoes of a famous footballer. The experience relies heavily on video and mini-games – making it rich terrain for collaboration between game developers and filmmakers – and features players like Gary McCallister and Teddy Sheringham. Sponsors seeking to touch its 2.1 million users include Nike, Red Bull and Alfa Romeo.

“It’s the fusion of film content and social gaming that really ties it together,” explained Welsh.

Vincent Morisset spoke next. His most salient work is perhaps what he’s done for Arcade Fire, but Morisset has had a storied career, highlights of which he provided at MIPCube today.

Faced with questions of whether music videos were still relevant, Morriset developed what is considered to be the first interactive music video: The Arcade Fire’s beonlineb.com, which hit computer screens in 2007.

“There was something kind of absurd about all this work and finishing with this tiny image … so the singer said ‘Vincent, try to find a way to make it relevant in the digital world’,” Vincent recalled.

In 2011 he and the band went further. For its album The Suburbs, he created an iPhone app using the podcast format and microchaptered images to the song, dubbing it “synchronised artwork.”

“I took technology that was existing but in a different context,” said Morisset. “People are still listening to music in their environment … but at the same time have a direct connection, and evocative visuals, going along with the music.”

His most recent Arcade Fire project is perhaps the most telling, because it speaks to both the old world and the new, interactive and traditional. Observing that a number of their listeners weren’t necessarily “geeks”, the band asked Morisset to produce an interactive video that would also appeal to people who weren’t tech-savvy or didn’t have very powerful computers. The result was Sprawl2.com.

“It’s a dance-activated film so depending on how you move in front of your webcam … the characters and the frame rate will change,” Morisset explained. “If you stop, the choreography will loop at the specific moment.”

The project is special to him because of that bridge between the interactive and traditional. “It’s two worlds and they have really specific needs, but we could really reuse parts of each one.”

And as icing on the cake, the National Film Board of Canada gave him carte blanche for two years to produce something special. The magnificently ambient result is Bla Bla, “a film for computer”, in Morisset’s own words.

“I took this opportunity to define the grammar of this medium and develop the potential of what we could do. How could we tell a story differently while we present images on a computer?”

In Bla Bla, you click anywhere on the screen with your mouse and spontaneous things happen. A narrative thread follows you, investing sense where there is none.

“It is really playful and universal. For us it was a result of a long reflection of the medium, but in a strange way it related to a lot of people, from kids, to geeks, to people who were not necessarily used to this interactive piece. And besides, there was this theatrical work where you try to define the process and figures and put names on non-linear editing.”

With filmmaking so experimental, it is easy to wonder what his relationship is like with producers, but Morisset talked about his professional liaisons in modest terms.

“I always have the feeling of walking in the fog, and I share that with the producers I work with,” he said after Richard Welsh observed it isn’t always clear for a producer what he wants or what should come next.

“We embrace the research and experimentation and just validate this idea,” Morisseet went on. “And when we touch something that is really successful, that’s how I basically build a project: I kind of knit on the good finds and have more of an intuition on the actual connection.

“I think that this medium and this experience are unique in that way … I kind of reach for that feeling and try to experiment with it, and when there’s something with potential you grow up with it instead of being frustrating [sic]about the limitations.”

A question from the audience later asked Morisset his feelings about iPad. He laughingly confessed that he was skeptical until his significant other bought one, and since then he’s been thinking more about uses for it.

“It’s a seed in my head … something will emerge out of this,” he said. “I often say I’m always a bit grumpy about new stuff,” confessing that the term “transmedia” didn’t ring so well for him either when he first heard it.

Even so, Morisset keeps an open mind. “I always try to look at what we learned in the last year, and revisit and refine it. I don’t care about being the first person to do this kind of thing.

“Maybe that’s why sometimes the projects are surprising, because they are a bit out of sync with the rest of the trends,” he concluded thoughtfully.