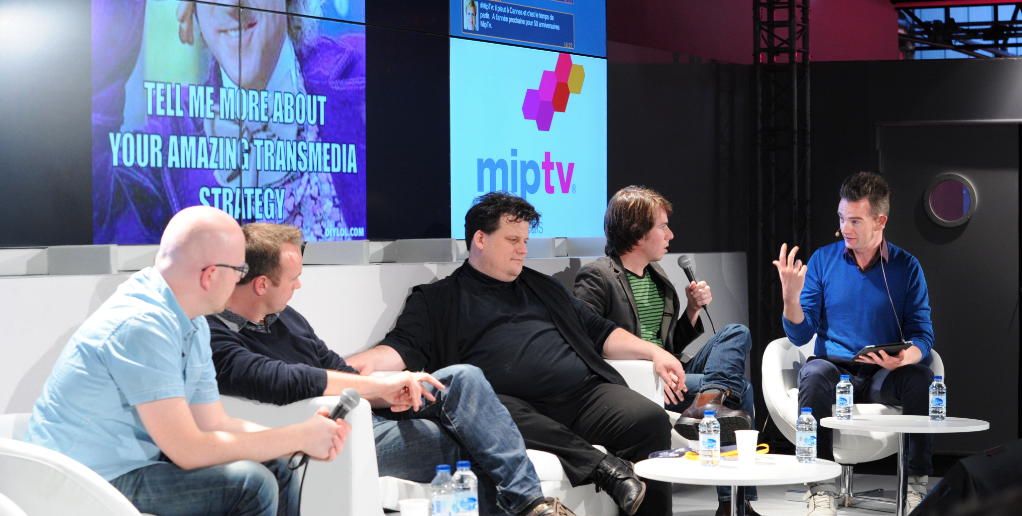 At today’s MIPTV Wrap Up session, the panelists were asked to bring a slide that summed up the market.

Format developer Omri Marcus of Red Arrow Entertainment chose an image of ITV-distributed format The Audience because, he said, is sums up the growing social aspects of modern TV content: “It has a social element where 50 people help you with your daily problems,” he said. “And what is interesting is that the show, like several others that are around at the moment, is based on the wisdom of the crowd where a group of people do their best to solve all the problems a person encounters in life.”

Format developers are adding social media features to their shows but many commissioners are still uncertain about the benefits: “People who develop new TV shows are usually very good at reflecting what’s going on, but the social media phenomenon, which I consider to be such a great gift to us all, is not properly represented or as broadly appreciated as it should be,” Marcus said. “I have two dating shows with me here in Cannes and both are based on social media. But programme commissioners are still very slow to recognise the potential.”

Richard Kastelein, managing director of the Agora Media Group, identified All3Media’s decision to sell its programming directly to viewers via a connected TV app as a development with enormous ramifications: “it’s a huge leap forward and represents a very exciting new chance for producers to build relationships with brands, which they were not able to do previously,” Kastelein said. “And when you consider that there will be 150-200 million Smart TVs by 2014, the implications of what All3Media has done are enormous. We are in fact looking at a new gatekeeper, and clearly broadcasters are quite scared by the implications of being bypassed. But as much as this is a threat, it also represents a massive opportunity. And I have no doubt at all that we’ll see more companies doing something similar.”

As Marc Goodchild, managing director & chief creative at IpDipSkyBlue.tv pointed out, when it comes to selling content directly to fans, Angry Birds maker Rovio already has its audience in place and can reach them via push notifications. Indeed, this is what it plans to do with the new animation series it announced here on Sunday.

“There are 700 million Angry Birds game apps out there, so their content has a massive audience,” he said. “And then there are other interesting examples such as Moshi Monsters, which the producers took straight to audience, but ironically the biggest uptake was when they advertised on kids channels, so they were using old media to force uptake.”

There is currently a whole new wave of transmedia producers, or at least of producers who describe themselves as such, but format developer Simon Staffans, of MediaCity, remains unconvinced: “I met a lot of people this week who described themselves as transmedia but it’s clear that many of them really are not, and there is a danger that they’ll dilute the relevance of the term,” he said. “And while I understand why this is happening, there are also quite a few genuine pioneers out there who have never described themselves as transmedia.”

According to Goodchild, the truly exciting aspect of transmedia lies in the fact that it places the story centre stage, and then tries to find the best and the most appropriate platforms to complement it. But as Staffans pointed out, product placement brings about a different dynamic: “If transmedia storytelling methods were to be applied to product placement, it could rapidly become much more effective and relevant,” he said. “It’s a very exciting area.”

When the session moved on to open discussion, Staffans said he was definitely encouraged by the fact that “everyone was talking to each other at MIPCube. Storytellers understood the technological limitations and the need to raise money, brands realised the need to put out compelling content and the tech community were talking to everyone.”

For Kastelein, there are some examples of broadcasters attempting to be more social – for example Channel 4’s work with Embarrassing Bodies and Sexperience (notably referred to by the UK channel’s Adam Gee in his MIPDoc keynote). But as moderator James Martin pointed out, the number of new TV shows with Facebook pages is still just 29%, while only 15% launch with Twitter accounts. This suggests that the traditional industry is still uncertain about how best to engage with the social media audience.

The emergence of branded entertainment was regarded as a significant development, with Marcus calling Coke’s activities “very encouraging, inspiring. It’s a completely new category, though I’m not really sure what will emerge from that.”

Goodchild sees brands as being “ahead of the game” citing Fosters Lager’s curation of comedy content online as significant – and also pointing to new technology that allows brands to integrate themselves into the fabric of video content. “So a poster in the background of a music video or TV show might show a brand that reflects the behaviour of the audience,” he explained.

The big missed opportunity, according to the panel, is all of the compelling background data or shoulder content behind a production which could be used to populate second screens. “All the knowledge that is generated during production is effectively binned right now because of lack of budgets to organise it,” said Goodman, “but it would be great to unlock the potential of that.”

YouTube loomed large as a discussion point with all of the evidence suggesting that the Google-owned company is gearing up to join the TV media mainstream. Greater sensitivity to partner copyright issues, increased focus on ‘channels’ as opposed to ‘views’, and US$150m investment in original content could be preparation for a significant push – with over-the-top services delivered via connected TVs and supported by Google ad technology.

In terms of other companies to watch, Kastelein cited Zeebox, the 2screen app that could enable a closer correlation between advertising spend and consumer spend. Sky’s recent decision to take a 10% stake in Zeebox values the start-up at US$150m, underlining the significance that established media companies place on the ability to leverage data more effectively.

This and more in the Quick Review, the executive summary of MIPTV, MIPCube, MIPDoc & MIPFormats key events. Just fill in your details in MIPBlog’s right-hand column to receive your copy!

The MIPTV News’ Andy Fry also contributed to this post.