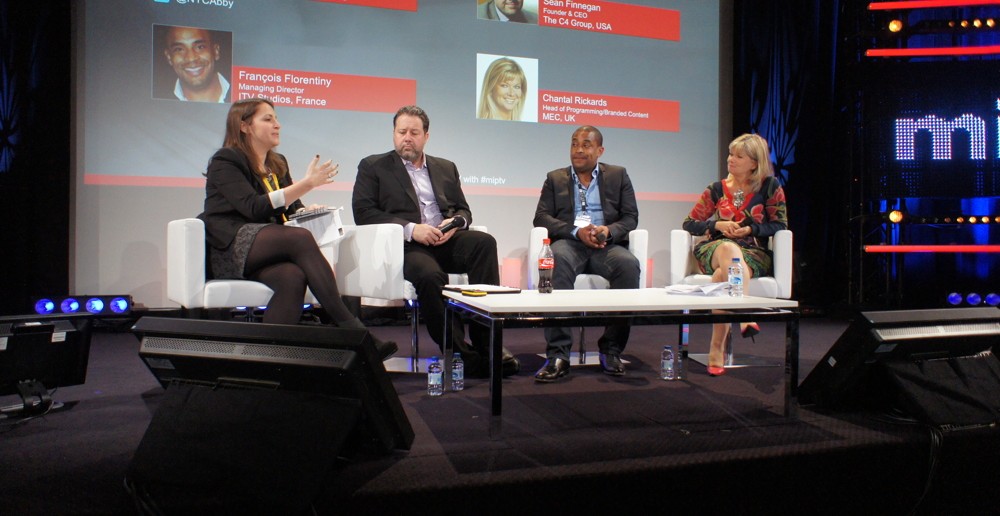 Moderator Abby Marks of OgilvyEntertainment began this session by announcing the launch of Ogilvy’s Branded Entertainment Assessment Model (BEAM), a way of gauging your programme objective, creating benchmarks and measuring them as you go.

It seeks to accomplish two goals:

“Our goal is to set forward some guiding principles, and the goal is to promote brands to adopt, to feel comfortable” advancing in the nebulous world of branded entertainment, Marks explained.

Learn more about BEAM in the white paper “Making Magic, Using Logic“, embedded at the end of this post.

After presenting BEAM, Marks invited the other panelists onstage.

MEC’s Chantal Rickards began with a reflection about understanding brand language. “It’s important to me to have a background in programme thinking because it helps me understand your world, the world of creation, but it also is incredibly important to the brands that I help tell stories and promote their products.

“What we’ve always wanted to do as programme makers is not just shout at people. Where we’ve ended up, which is where brands want to be, is having a two-way conversation with the audience. And that’s incredibly exciting,” she went on.

ITV’s François Florentiny seemed to share this excitement. “For producers like us, advertisers and more and more interesting to talk to, to fine tune with and to make entertainment with.” He did, however, point to how important it is for branded entertainment to be easy to scale.

“Our main concern is to find the right formats that can be replicated, because it takes time to sell to media companies and sell an idea. If it’s good and can be replicated, it’s good to have a model – like ‘this is called this in the US and this is called that in Mexico’ – and fine-tune for your clients to find the right strategy in terms of social media.”

This standard is important because that is how ITV’s shows are dispersed. “Our goal is really to make sure that if it works in the UK we can have France, the US, Australia, Germany, and Scandinavia done right away,” he explained.

“I think the digital business has always been too smart for its own good,” mused The C4 Group’s Sean Finnegan. “Sitting on the sidelines, you’ve always seen brands be frustrated by the power we have in the digital space. They’ve sort of left it as a special case, as a testing allocation, kind of ‘we’ll use some scatter funds to do something’.

“The more we can provide a bridge to where the funding is, the more we can equate some standard measures – such as reach, principally – into the assessments done by these people doing the budget-sharing.”

Finnegan also expressed his distaste for (Facebook) Like-chasing. “Likes to me are clicks from 10 years ago,” he said. “If you’ve ever used any of these social-based sharing tools or photo-based apps, you know that there’s probably one percent of your audience that’s commenting or liking your material. 90% of the people out there are lurking. There’s a tremendous amount of audience that is actually participating with your content that you should be tracking and adding to your total reach.”

“Whether you’re spending $0.50 or $3 on a Like, all of that has a value and you have to understand what that is,” Rickards said.

Finnegan emphasised the importance of pixel tagging, a way of measuring who’s seen your ads and taken an action either immediately or at a later point in time, for understanding true engagement.  “You start to get a sense of digital attribution: What audience took action immediately, or eventually. And there are platforms and programmes out there that can help you start to understand certain lifts for sales or whatever traffic you’re trying to generate.”

He also feels that “it’s critical that programmes have paid support. Then you can seed it through viral distribution networks, like Facebook and Twitter. Those two start to compound and work well with one another.”

“A lot of brands want to be in content now because they realise that entertainment is the space to be,” Rickards said. “I think where we’re up to at MEC is there are specialists like me who sit alongside the real marketeers, so I never go too far off centre in terms of making sure that i’m always tying back into the marketing objective. But it’s vital that the content piece works for the platform or channel. If it doesn’t work for the channel, it doesn’t work for anybody. If it doesn’t work for the audience, the whole thing is a complete waste of money.”

In the end, thinks Rickards, “The best content projects are the ones that are collaborative between the producers, the brands and the platform. And then it works like a dream.”