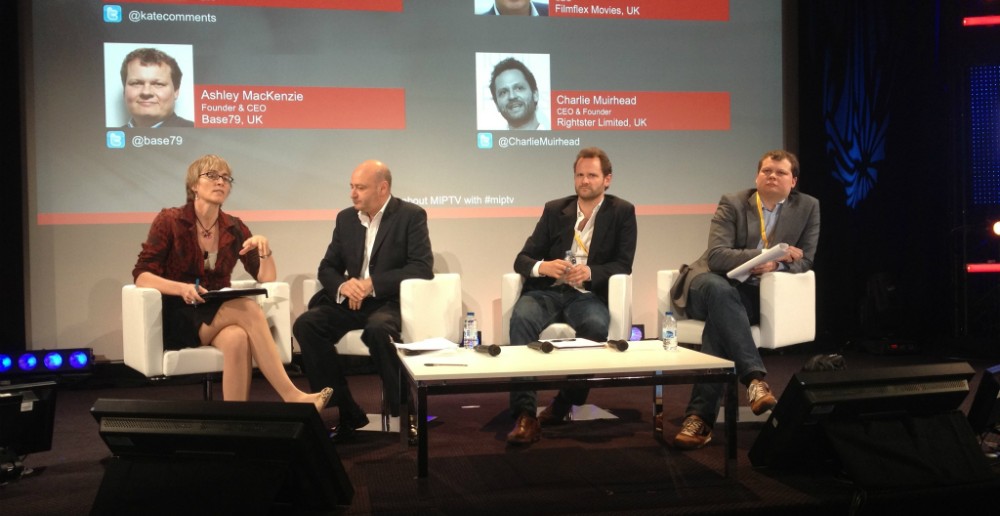 Filmflex Movies, Base79 and Rightster discuss monetisation strategies for catch-up TV and beyond.
By Stuart Dredge on April 3, 2012 0 Comments

The video-on-demand market is increasingly lucrative for the TV industry, but what’s the best way to capitalise on the growth of catch-up TV and other VOD services? A panel convened at MIPTV this afternoon to discuss the question.

Jeff Henry, CEO of Filmflex Movies, Ashley MacKenzie, CEO of Base79, and Charlie Muirhead, CEO of Rightster formed the panel, which was moderated by journalist Kate Bulkley, who opened up by outlining the growing popularity of VOD services, from Netflix, Hulu and YouTube to BBC iPlayer and other catch-up services.

“There’s a lot of people in this space, and we’re also seeing a lot of people who have content rights going direct to consumers, like Miramax,” said Bulkley, before handing over to Henry.

Filmflex provides movies on demand, having launched in 2005 and managed more than 70 million purchases, processing more than 4,500 films through its services.

It’s a joint venture between Sony Pictures and Walt Disney, and has deals with more than 30 distributors. It runs services for Virgin Media, Channel 4 and HMV in the UK, with more partners on the way in 2012.

Henry talked about the film industry’s windows, with roughly six months for theatrical releases, followed by a 3-4 months VOD and pay-per-view window, then pay-TV and subscription-based VOD get their turns for 12 months, before free channels.

He said content providers need to be flexible, as these windows evolve. “All these windows are changing, moving, contracting, expanding. Somebody who has content has to be aware of the flexibility that’s needed within that.”

Henry also referred to Screen Digest figures claiming that transactional VOD represents 1% of plays and 63% of total market revenues, while subscription VOD is 1% and 13% respectively, while free VOD and ad-funded VOD are 98% of plays but 24% of revenues.

For FilmFlex, 80% of its income comes from new films. “However, every single one of the titles has been purchased, so there is an ability to monetise the long tail. It’s just a matter of how much one wishes to specialise in that.”

Henry noted that consumers now have an expectation to access content beyond their PCs, and said that the winning companies will “experiment with new business models, and some that haven’t even been dreamed of yet”.

Second up was Rightster’s Charlie Muirhead, who talked about his company’s partnership with news producer ITN Productions in the UK.

ITN syndicates its content to several hundred publisher partners – consumer-facing websites – and is in a different position to FilmFlex when it comes to the long tail’s importance to its business.

“The archive content actually delivers a very hefty amount of those views on the publisher sites, and dominates the revenue generated as well,” said Muirhead. ITN does around 50 million monthly video views across its partners’ sites.

But ITN wanted to do more with its video, collapsing costs in its value chain and getting more control and visibility for the ITN brand. Which is where technology startup Rightster came in with its cloud-based platform for rights management, and skills in live streaming, audience development and YouTube/Facebook management, among others.

A key part of its ITN partnership was providing a “constant feedback loop” to ITN’s editorial team, while also launching a Facebook channel with live and VOD features.  Results? ITN’s Royal Wedding coverage made money in 20 countries, with CPMs of between £10 and £30. And ITN expects its digital revenues to more than double in the next six months.

Finally, Base79’s Ashley MacKenzie gave his view of how VOD is evolving. It’s a B2B company that helps video content owners protect, distribute and make money from their content online.

His company handles rights management, hunting down unauthorised clips on the various video platforms, in order to ensure the flow of people to the official channel or site isn’t reduced. It files takedown requests and puts official versions of videos on the platforms.

“We run on YouTube about 360 different channels,” he said, referring to the channels branded for Base79’s clients, who include TV companies, but also music labels, sports rightsholders and original content studios – teenager Jamal Edwards’ hit SBTV is one of its clients.

He also said it’s vital to hit scale in order to make money from video online, and “move the dial” for advertisers. “The question that I feel is most pertinent is not ‘what’s my distribution strategy?’, and not even ‘what is my monetisation strategy?’… But ‘how am I going to build audience around my content online?‘”

The session segued into questions from Bulkley and the audience. She asked Henry what he makes of MacKenzie’s last point. He said FilmFlex is lucky to be dealing with “the most premium of premium content”, making films available just after their cinema runs end – and thus able to piggyback on the original release marketing.

“We choose partners who have a brand and traffic which they wish to monetise,” he added. “We’re not chasing the audience. We are partnering with people who have that audience, have traffic, and are asking us to monetise it.”

Muirhead then talked about the importance of metadata and search engine optimisation (SEO) for companies like ITN as they look to ensure people find their videos on search engines. MacKenzie agreed that the right metadata is crucial on sites like YouTube.

The panel talked about what YouTube is doing by funding original channels on its service, with MacKenzie saying it’s about raising the quality of content – and thus attracting more premium advertising – as well as stimulating the investment ecosystem around original content online.

How does FilmFlex make sure content gets across multiple devices for its clients. “One of the negatives from dealing with such high quality content is we have absolutely rigorous security issues,” he said. “We have to make sure when we move on to multiple devices that we’re providing our clients and our content partners the levels of security we would expect.”

But he noted that consumer expectations have moved fast – people want to watch videos on multiple devices, and have links between them – start watching a film on one device and then continue on another. It’s not an option to have a multi-device strategy: “It’s an expectation”.

Muirhead noted that the monetisation systems are different across a lot of these devices, which can prove a challenge. MacKenzie noted that there are less fears of piracy on these devices too for his clients, not least because their videos tend to be intended for free distribution, rather than paid access.

What needs to shift to make this new VOD ecosystem work better? “Getting rights cleared properly has always been a challenge and remains a challenge,” said Muirhead, citing one company that makes a popular web series, with only a few episodes cleared for distribution outside the US. He hopes that will change.

“We’ve got to try to instil a sense of rights experimentation,” said Henry. “The windows that existed, they’re collapsing, they’re moving… Not easy, but that’s something that we have to work with our content partners to say ‘Look, let’s try something here…'”

Meanwhile, MacKenzie said for his business, scale is the key challenge, as well as those pesky rights clearances – for example when negotiating between broadcasters and producers, or music labels and music publishers.

“Scale changes everything, so for us we get very excited about connected devices,” he said: as there is more scale, and thus more revenues, the rights clearances problem should start to fade away.

How important is social sharing to VOD? “I think it’s hugely important, and we’re in such early days of the social TV experience,” said Muirhead. “To be able to sit at home and through things like Facebook which can tell you which of your friends are tuned in to the same thing… It’s something that’s a very small percentage of viewers today, but something which will be taken for granted [in the future].” He also mentioned what Google is doing with YouTube and its Google+ social network.