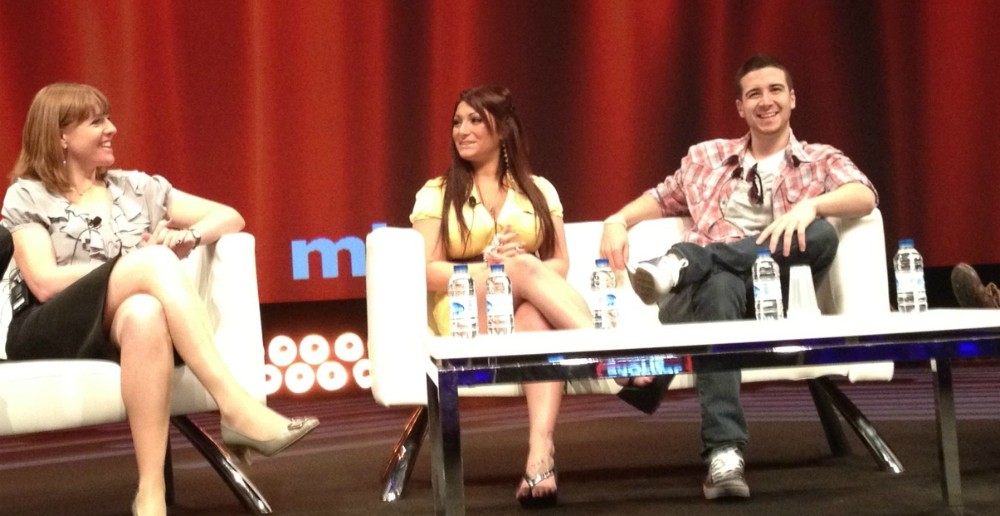 Liveblog: Jersey Shore comes to MIPTV with MTV and VIMN

MTV’s Jersey Shore is a phenomenon far beyond its home market, the US. It’s screened around the world, with a new series debuting this month, and its tanned, squabbling stars have inspired a host of similar shows.

Two of them, Deena Nicole Cortese and Vinny Guadagnino, appeared for a keynote showcase at MIPTV this morning, sharing the stage with Chris Linn, EVP of programming and head of production at MTV, and Caroline Beaton, SVP of international programme sales at Viacom International Media Networks.

“We were all cast differently,” remembered Guadagnino. “I just filled out a casting online, a regular person… We’d go to the Jersey Shore every year, so I was like why not? People will follow me with cameras this time.”

He added that the cast have learned not to think about the cameras now, responding to suggestions that the show might be fake. “We don’t have time to be fake. The cameras are on us 24 hours a day… You’d be surprised what your mind gets used to.”

Linn said the show is MTV’s most popular of all time, and “quadrupled our average in the 10 o’clock hour”, bringing in a lot of new viewers who then might sample its other shows. “MTV always has an iconic hit at some point in its evolution, and this is its next one.”

Beaton talked about the international success of the show, as well as localised versions of the format. “You never know when you see something on paper like that quite what the reality’s going to be. What makes an international hit is the look and the feel and the cast of the show… There’s something incredibly charming about the show, and which totally transcends international barriers.”

She also said that it’s been interesting to see the first non-US version of the show, Geordie Shore in the UK, has become similarly pivotal for MTV in that country. And even that show has travelled.

“The clever bit for comes when we start talking about making local versions outside the MTV family,” she said. TF1 in France has taken the format and finished programme rights – a deal announced today at MIPTV.

Do the stars get a sense of the international reach of Jersey Shore? Guadagnino said he gets contacted through social media by fans around the world, which makes it hit home. “Someone sitting up in the hills on Mongolia is watching you fist-pump!”

The show was also relocated for Italy for a season, which Guadagnino said has been fun for viewers to see the cast adapting. But Cortese chipped in saying it was a relief to get back home to Jersey for the fifth season’s filming – which happened straight after.

Why Italy? “It really came about from talking to them about places they would like to travel,” said Linn. Meanwhile, Beaton said that filming overseas helped “spark the imagination” among MTV’s partners for localised versions of the show.

So what’s next for the show? Season six has been announced, and some cast members are filming spin-off shows. Two so far: The Pauly D Project follows that character’s DJ career and started airing last week in the US. Meanwhile, a Snooki and J-Woww spin-off has just finished shooting.

“It gives the audience a chance to see the characters and their lives away from the Shore,” said Linn. “A deeper experience and connect even closer with the characters that they love from Jersey Shore.”

Guadagnino says he’s getting a lot of opportunities away from the show – a bit of acting, maybe write a book – but he stressed that the show remains his main platform. Cortese said she’s “wiggling around figuring out what I’m doing!” But season six shooting this summer remains her priority.

“It’s amazing how little they’ve changed as people,” said Linn. “They’ve been able to stay really grounded, and rooted, and real. And that comes across in the show, and that’s what’s kept them relatable to the audience.”

He continued: “You do see them evolve as people. You see how their relationships are changing… It has all the aspects that a great soap opera has, you become connected to these characters and are following these journeys with them.” One specific journey being Snooki’s pregnancy, which will play out in the next season.

The session ended with the panel looking forward to MTV’s Jersey Shore party tonight in Cannes. “Maybe if I have enough drinks, you’ll see me in action!” said Guadagnino.