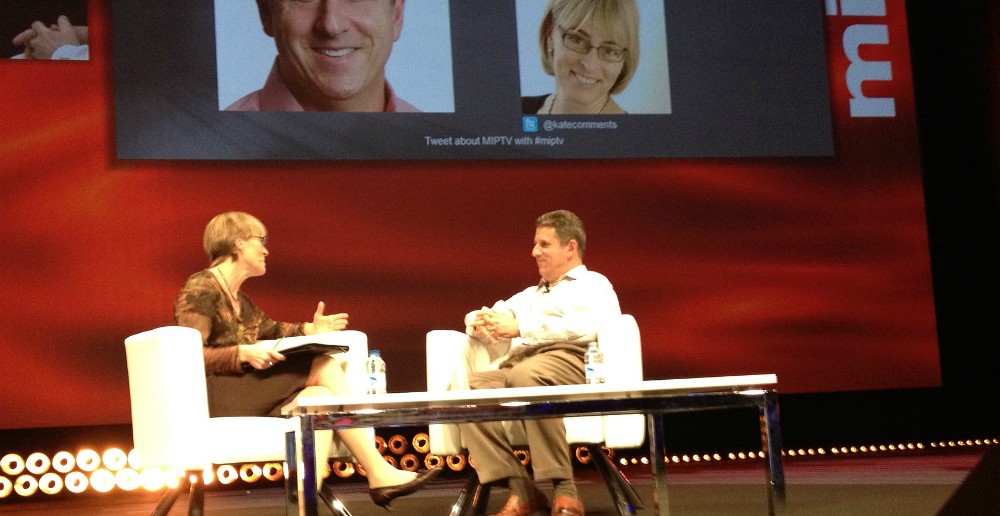 It’s a long time since Amazon was a company focused on books. Its digital media store and services are an increasingly important part of its business.

Vice president Anthony Bay gave the final Media Mastermind keynote speech of the day at MIPTV, to explain what Amazon is doing, and what it means for the TV industry. The first time for Amazon at the event, noted Bay in his introduction.

“Frankly, if you’re not yet talking with us, you should be,” he said, before outlining Amazon’s aim to be “the most customer centric company on the planet”. That means a broad selection of products (or content), and to provide value and convenience.

Amazon’s annual revenues are close to $50 billion, with 45% of those coming outside the US. It had 164 million customers in the last 12 months, and there are more than two million merchants selling on its platform. On the video side, meanwhile, there are 120,000 titles available in the Amazon Digital Video store.

“We have a very similar chart for video: DVDs and Blu-rays, and digital video,” noted Bay. “The trust that we’ve built up with customers in physical is transitioning very very well to digital.”

He went through a quick history of Amazon’s transition to digital, buying film database site IMDb in 1998, while launching its video download and streaming service in the US in 2006. The company bought a partial stake in streaming service LoveFilm in 2008, and then acquired it fully in 2011. LoveFilm now has more than two million subscribers.

Now, Amazon sells DVDs and Blu-ray discs on its website, while also running the Createspace service for digital and disc self-publishing. Amazon Instant Video offers digital rental, purchase and subscription, while LoveFilm offers disc and digital subscription and rental. And then there’s IMDb.

The company has licensing partnerships with a host of TV companies, while it aims to make its playback clients available on as wide a selection of devices as possible. Meanwhile, IMDb has more than 150 million unique visitors every month, with 40 million coming through its mobile app.

Onto LoveFilm, with its two million subscribers across the UK, Germany, Sweden, Denmark and Norway. Earlier this month, Amazon revealed that streaming has overtaken physical DVD rentals at LoveFilm. “We’re spending a lot of resource to help educate consumers about internet video,” said Bay.

Do Amazon’s devices help sell its content, rather than the Apple model of the content helping sell its devices? “I don’t know I’d put it like that,” said Bay. “The Kindle team would describe it as a content-forward strategy. When you turn on the Kindle, it goes right to the books. And when you turn on the Kindle Fire, it goes right to whatever you’ve been watching or listening to.”

How is the Kindle Fire going? Amazon’s tablet launched in November. “People seem to be very happy with their Kindle Fires,” said Bay, several times, when asked about how the device is selling. And on a European launch? “Stay tuned,” he said. Twice.

Is Amazon supporting the studios’ UltraViolet digital rights management (DRM) initiative for helping people to watch a film they’ve bought across multiple devices? “We continue to evaluate UltraViolet and its potential to add value for our customers,” he said, reiterating a statement made by Amazon earlier in the year.

Will Amazon keep the LoveFilm brand on in Europe? “We’re happy with what we’re doing.”

Bay also batted back a question about windows in the TV and film industries, and whether they’ll move to a point where content is available on a wider range of services and stores as soon as it’s released.

“For a certain segment of the population, the content is available right away because it’s pirated,” he said. “In some cases it’s less the window issue as it is the geographical restrictions. That’s one of the next frontiers… It’s definitely not going to get less interesting!”

Who is the biggest competitor for Amazon’s video business? “We literally focus on customers… The fact that other people are doing similar things is great, because it raises awareness.”

What about putting money into content, as Netflix has done with Lilyhammer and House of Cards. “We have something called Amazon Studios, and the idea for that is different. The system of Amazon Studios is people who would otherwise be unable to find an audience for their script can put it on Amazon Studios, and kind of crowdsourcing… It’s just starting.” So Amazon might take a role in producing this content, but it’s early days.

And his last word on Amazon’s ambitions to work with the TV industry. “We have a long heritage of helping people who make wonderful content sell and market their content. And digital is not fundamentally different… We believe we can be a great partner.”