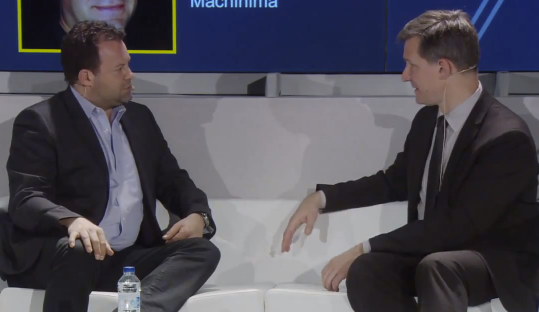 Gaming network Machinima is the third most-watched channel on YouTube. Co-founder DeBevoise told Robert Terceck how the company got there.
By Stuart Dredge on March 30, 2012 0 Comments

Machinima’s president and co-founder DeBevoise kicked off his MIPCube session by explaining what the company does.

Machinima means ‘machine animation‘ – people creating animated films using game engines, from Halo and Call of Duty to The Sims. Using game characters as digital puppets, in essence, before adding on dialogue and uploading the results for other people to watch. That’s how it started, anyway.

Today there are around 4,000 directors producing content for Machinima on a daily basis, with the company supporting them, and even financing some of the work – with some of its live-action series drawing global audiences of millions – 38m viewers for one series, and 1.1bn video views for Machinima as a whole in 2011, with 156m monthly unique viewers in February 2012.

“It’s a combination of the platform, being on YouTube which is not only a distribution but inherently a marketing platform because it allows for sharing of videos and really building an audience,” said Debevoise, who added that Machinima’s focus on 18-34 year-old males has helped too.

The company is also working with its producers to promote their work, and cross-promote one another’s channels. “We’re creating new stars on the network,” he said.

40% of the audience is in Europe, 50% in North America and 10% in the rest of the world. Are advertisers keen to get involved, though, given the global focus? Some have run global campaigns, like Xbox, with content and ads that will be geo-targeted for different countries.

Others, like TV network AMC, have provided all-new digital series to promote their established shows like The Walking Dead. Machinima generated 6m views for that series in a couple of weeks, versus 1m that had been generated by heavy promotion on AMC’s own website, according to Debevoise. Paramount Pictures also racked up millions of views for a GI Joe trailer.

On the radar now: co-production deals for original series. A show called Bite Me’s second series was co-financed by Machinima and Lionsgate, for example.

“Our stars and our network come from the audience, so there’s a credibility that we have as the voice of that generation and that community which is very real,” he added. “It’s a very fanatic audience, and growing. The fact that we get 60% of our audience outside the US and Canada is huge for us.”

The next phase is to go deep in each country, developing local, prime-time programming in each country in its local language. That may involve partnerships with big media firms in those markets.

Debevoise was asked about the company’s relationship with YouTube, which it’s been working with since early on as the focus for its platform – the videos are hosted and watched on YouTube rather than Machinima.com.

“We really didn’t believe that we could really generate scale by forcing an audience to go to a specific destination like a dot-com,” he said. “We were one of the earliest channel partners on YouTube.” One key benefit being that Machinima didn’t have to build a big salesforce, since YouTube took care of the monetisation.

That was counter to the conventional wisdom at the time, noted moderator Robert Tercek. But Debevoise noted that it meant Machinima didn’t have to go hunting for financing – it could focus on the content.

“YouTube is a great platform,” he said. “The steps to becoming an official channel partner are probably a bit more complex today than they were a few years ago because of the initiatives they have underway”. But he noted Google’s creation of a $100m fund to support new channel partners, which is a “very exciting opportunity”.

Is this an alternate universe to cable TV, asked Tercek with a mischievous glint in his eye. “I think they possibly might be thinking that!” replied Debevoise, keeping a straight face. He noted that YouTube is on TV screens, games consoles and a host of devices – an excellent cross-platform distribution partner.

Next up: the launch of a ‘Machinima Prime‘ channel focused on sci-fi, comedy and other shows that people would expect to see in prime-time on traditional TV channels. And in May, Machinima will be doing an ‘upfront’ show with YouTube, Vevo and others to show off its new series – in the same way that big TV companies traditionally have done.

He has also noticed some interesting trends among Machinima viewers for its shows, which tend to be released in weekly episodes. “A lot of comments come back: ‘we wanna see more, and we wanna see more now'”. The company is thus looking at ways to release entire series in one batch, for binge viewing.