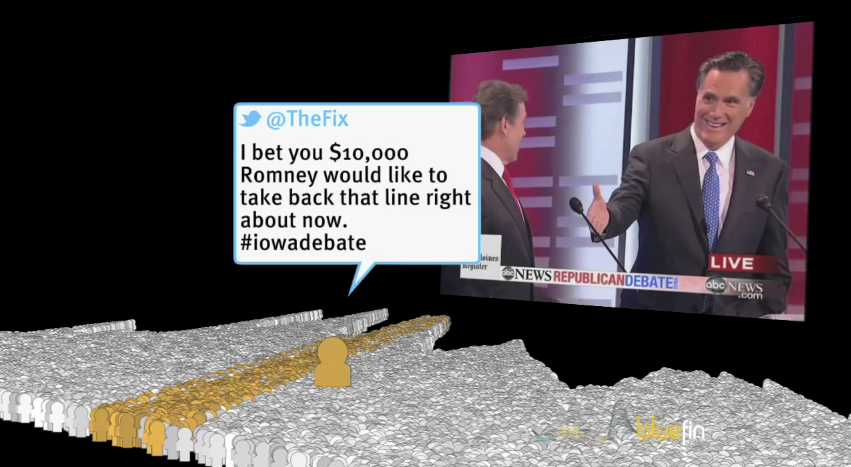 Bluefin Labs painstakingly tracks all conversations about US TV shows. The results are incredibly useful for producers, broadcasters and brands
By James Martin on December 15, 2011 3 Comments

Deb Roy, a faculty member at MIT and founder of Bluefin Labs, a Social TV solutions company, gave a mind-blowing social TV presentation at Paris-based internet gathering LeWeb last week. Sure, there’s been lots of talk of late about social TV: but to our knowledge, few companies are analysing social media conversations as deeply as Bluefin Labs right now.

For Roy, the initial aim of his company was to “study the interplay between language and context in TV.” Henry Ford’s infamous claim that “half my advertising is wasted; I just don’t know which half” was also a key inspiration, said Roy. Indeed, the feedback loop social media provides can be particularly useful for brands, producers and broadcasters.

And how: Twitter and Facebook TV comments — like  “watching #glee”, or “watching late night with Jimmy Fallon” — have exploded of late. Reality TV comments alone have seen triple digit growth, with Extreme Makeover: Home Edition comments increasing by over 800%, for example.

“People talk about what they watch,” said Roy. “Until recently, that talk would disappear. Now, people are creating their own networks, that these statements are flowing through. It’s a perfect storm: we can see what people are saying, and analyse it.”

So Bluefin Labs grew out of the notion that you could “build a machine that watches all TV, records all conversations, and tries to predict what people would say in future.”

The result is the ‘TV Genome‘, or an immense map of the links between people on social networks and the content shown on all TV channels at any given time. This (silent) video demonstrates it best…

…especially at the end, when it shows an entire country bursting into conversation after having watched president Obama’s State of the Nation address on TV.

The TV genome works in a similar way to Google’s PageRank, whereby the number and quality of inbound links to a website increase its chances of coming out at the top of a Google search. “You don’t have inbound links with TV,” said Roy; “but you can treat each social comment as a kind of link.” As such, the TV Genome can detect not only what TV shows are the most-discussed at any given time; but also — crucially — who is watching & talking about them… and what they are saying.

– 24/7 measuring and recording of the number and nature of comments per show.

All of the above enables the company to build tools like tagclouds and other visualisations, which give its users “a realtime read of TV data.” To illustrate the point, Roy switched to an impressive case study, during a recent US political debate on TV:

[youtube]zompMISDiTY[/youtube] Crucially, the tool tracks not only the peaks in conversations around different topics: but also the viral spread of certain keywords. As Roy explained, such data could be particularly useful for advertisers, as it tells them how engaged the audience was with the show during which my ad played. As Glee viewers are particularly engaged and active on social media, for example, it would make sense to buy ads with that show. Such data could clearly be more effective than traditional audience measurement.

Segmentation is another key draw: Bluefin can tell its users what Diet Coke advocates talk the most about, for example. It also analyses audience mindset: online chatter will tend to be polite when people are watching a police show, for instance; and more vulgar in front of shows like Wipeout, he said. Another key element is audience DNA, by genre: the TV Genome shows that people who talk a lot about political TV shows are also likely to talk about drama, then documentaries. “So advertisers should pitch their projects accordingly,” said Roy.

“This is all part of the sea change of what’s happening in media right now,” said Roy.