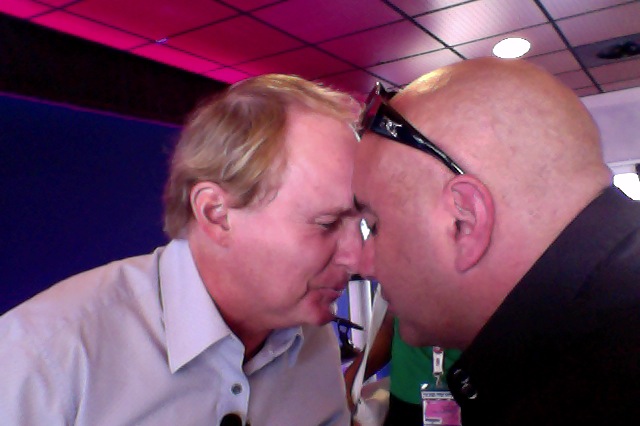 Liveblog: The Pitch Doctor’s Guide to Making It at MIPCOM

Paul Boross' enthusiastic breakdown of what it takes to make the most of your MIPCOM
By Angela Natividad on October 3, 2011 0 Comments

He began by teaching us to expect the unexpected. Boross has a psychology background (neurolinguistic programming, specifically) as well as a performance background, so to warm us up he brought his cohort Robertson onstage to sing us a song.

“That’s something you didn’t expect, wasn’t it…?” he goaded. “That is MIP. Expect the unexpected. Go with it.”

He later framed this moment by pointing to its memorability: none of us will ever forget Robertson now, and it is true he suddenly seemed imbued with a singular and special quality.

Our second lesson: “The meaning of your communication is the response you get.” If you don’t deliver the message people want, it’s your responsibility. Our job at MIPCOM is to clarify the message we’re delivering.

He also emphasised the importance of being in the right headspace: “We programme ourselves for success or failure.” At this, someone in the audience unexpectedly began chirping, “that’s true, that’s true” with great conviction, as though at church.

Nervousness is natural. “There are two kinds of people in the world,” said Boross: “people who are nervous, and people who are lying.” It’s how we deal with that nervousness that counts. To explain, he pointed to a concept called the “cybernetic loop”: the notion that the mind and body affect each other. What you do with your body will alter your attitude, and vice versa: what you concentrate upon changes your outward comportment.

This is important when you’re pitching. As humans, we can recognise when someone is depressed or nervous. So sell a confident front. “People buy people. People buy from confident people.”

But mainly he emphasised the importance of building rapport instead of focusing on selling. A hardcore sales attitude creates an instant barrier between you and the person in front of you, who probably doesn’t want to buy what you’re punting. You also lose focus on the individual, and ultimately lose control of the outcome of the meeting.

When your focus is entirely on connecting with that person, you keep the door open for future productive opportunities. “Think of sales as the transfer of enthusiasm from one person to another,” Boross said.

Which brings us to the importance of following up: when you do it, remind people why it was so great to meet them. Personalise your email and demonstrate to what degree you’ve listened to them and found them special.

Attitude will carry you through MIPCOM. And the most important thing you want to do here is build rapport, whose dividends pay off indefinitely:

To sum up, the best networkers:

Follow Boross on Twitter (@paulboross), and read his own five tips on making the most of MIPCOM, posted just prior to the show.