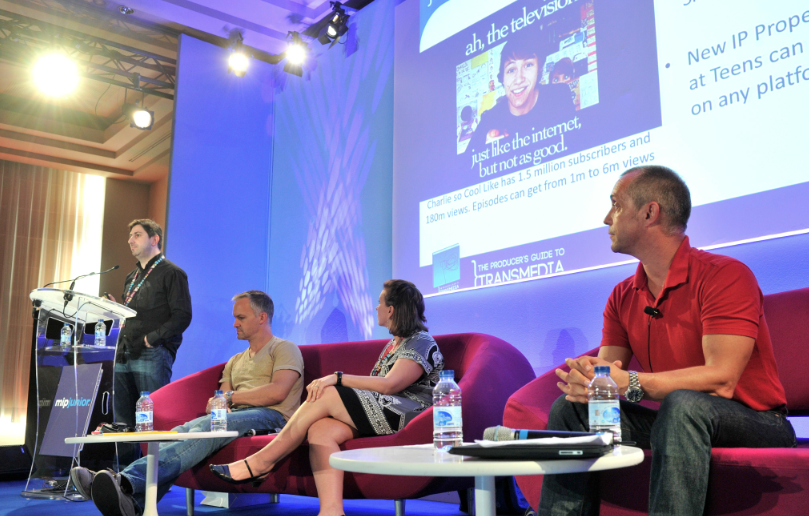 Liveblog: Teen Market at the Heart of Transmedia’s Explosion

FremantleMedia, beActive and InsightKids on youthful TV innovation at MIPJunior
By Stuart Dredge on October 1, 2011 7 Comments

Transmedia has been a buzzword for several MIP shows now, as the idea of telling stories that span different devices and platforms catches on among TV producers, broadcasters and web/app developers. The age group that is arguably most open to transmedia storytelling is teenagers: they have grown up with the internet and a variety of devices.

This afternoon’s panel at MIPJunior explored this area, to find out if IP with games, social media and fiction as core elements rather than marketing spin-offs will be as lucrative as the industry hopes.

Meir got things started with a short presentation about her company. It’s a research-driven strategy firm in New York that focuses on what children want from their media. So what do they want? “Teenagehood is a time of extreme transformation and connection,” she explained. “You are literally going from a kid mind and body to a grown-up mind and body. That’s huge… And teens are all about being social and being connected.”

Meir also explained some cultural trends among teens. First: fast fixes. “They are connected every moment, every day. They want that fast fix. They are checking their texts every moment. We have literally heard about teens bringing their mobile phones in a ziplocked bag into the shower, so they can still be texting.” She also said that teens want to be challenged: depth of character and story, rather than simplicity.

“This is the generation brought up to believe they can do anything,” she continued, referring to a ‘superhero complex’. “There are no boundaries for what they can achieve.” And finally, she talked about life as a game: “They want to game marketing, brands… they wanna play with your brands.”

Meir gave some stats on how teenagers consume media every day. Teens spend 218 minutes a day watching TV, 169 minutes online, 128 minutes using their mobiles, 57 minutes playing games, and 113 minutes on other  books, magazines, movies and so on.That’s a total media consumption of 8 hours 19 minutes, although a lot of this is multi-tasking: using their phone while watching TV for example.

Next up was Bob Higgins from FremantleMedia, to talk about how his company is working on entertainment for kids and teenagers. It produced My Babysitter’s a Vampire, a big hit in the US, seeded via canny use of social media. FremantleMedia created a fake movie called Dusk and created buzz around it on YouTube and social networks. There was also a web game. “This helped kids understand the show and the characters on a deeper, more impactful level,” said Higgins.

He also talked about how FremantleMedia has been using apps and social media for its less child-focused talent shows like X Factor and American Idol, with Facebook voting in the latter, and a ‘Tap to Clap’ feature in the former’s mobile app helping people share their appreciation for a contestant on social networks. America’s Got Talent has also solicited auditions – some from children – using YouTube in its most recent seasons.

“User-generated content is such a major part of teens and kids,” said Higgins. “They love making it: giving them an opportunity to make it, put it up there and get a place as a finalist on America’s Got Talent is a significant thing.” Higgins also talked about how keen teenagers are on ‘second-screening’ – using another device while watching TV. “I don’t think they really understand how to watch TV without touching something!” he said, referring to mobile phones.

Third to speak was Nuno Bernardo from beActive, which makes new IP aimed at teenagers which is as likely to appear online as on TV. He talked about Charlie Is So Cool Like – a series that has 1.5 million subscribers and 180 million views on YouTube, with individual videos garnering anywhere between one million and six million views. “Now these properties can start online and not be dependent on networks and studios,” said Bernardo, before stressing that traditional TV is still important for younger kids, as it’s where they discover new characters and shows.

“The shift is not on the TV content, but on the way they consume content. They prefer to watch it on-demand than on the linear broadcast. And they multi-task: they don’t just want to watch the content, they will probably be doing two or three other tasks too.”

Bernardo warned that TV can sometimes forget the needs of ordinary teenagers, though: the more aspirational they are – with displays of conspicuous wealth for example – the closer the stars of online shows are to their audience, since they’re “just normal kids doing cool or outrageous stuff”.

Bernado also had a warning for Angry Birds developer Rovio Mobile, which has well-known ambitions to turn its mobile game brand into a TV and film property. “If you take two years to create the movie or TV show, probably the audience for Angry Birds has found another cool thing to play or follow,” he said.

Is the fragmented nature of teenagers’ media consumption a challenge for advertisers and brands? Perhaps it’s more an opportunity: Higgins explained that American Idol’s sponsors are part of its content across all platforms. “Coke wants the 360: they don’t wanna just have the cup sitting in front of the judges. When clips are put onto YouTube, Coke follows it there. When it’s on Facebook, Coke follows it there. So whenever you’re experiencing American Idol, you’re experiencing Coke.”

Bernardo suggested that people are watching more television, not less, thanks to the multiplication of devices and platforms to watch it on. Meir jumped in at this point: “Ubiquity wins. You want to get an audience everywhere, every place that you possibly can… Kids today want to play with your brand, they wanna live your brand, wear your property, and they wanna control it. They want to build around it… The more you give them control and ability to interact with your property, the more connected they will be.”

How does this change companies’ views on how they create shows or properties? Character and story development remains unchanged, said Higgins, pointing out that doing “little shortform things online doesn’t mean you can shortform your characters”.

Angry Birds and FarmVille both cropped up again, as properties that took gaming into the mainstream, beyond existing ‘gamers’ – and possible inspiration for the TV industry “We definitely look at what’s hot in games and gaming, and is it something that we think can become a TV show?” said Higgins. “Can it become more than just a game, and should it? You see a lot of movies based on games that should never have been done… We look at everything and see if there’s a reason for this to become a TV show – and a good TV show.”

The panel were also asked about rights issues around user-generated content, where fans are posting their own videos on YouTube around a particular show or property. “As long as they’re not profiting from it – taking your property and making a business out of it – I think it’s a good thing,” said Higgins. “Kids and teens and fans talking about your stuff and engaging with it. Ubiquity? That’s a good thing. It’s a good thing that they care that much.”

What’s the next big trend in this teenagers/transmedia space? Higgins was honest: “I have no idea, but I think nobody does! If we did, we’d be rich as hell! What I’m pretty certain of is it’s not copying something that’s already out there… You just end up being a big me-too thing, and really the things that break out are the things that take risks.”