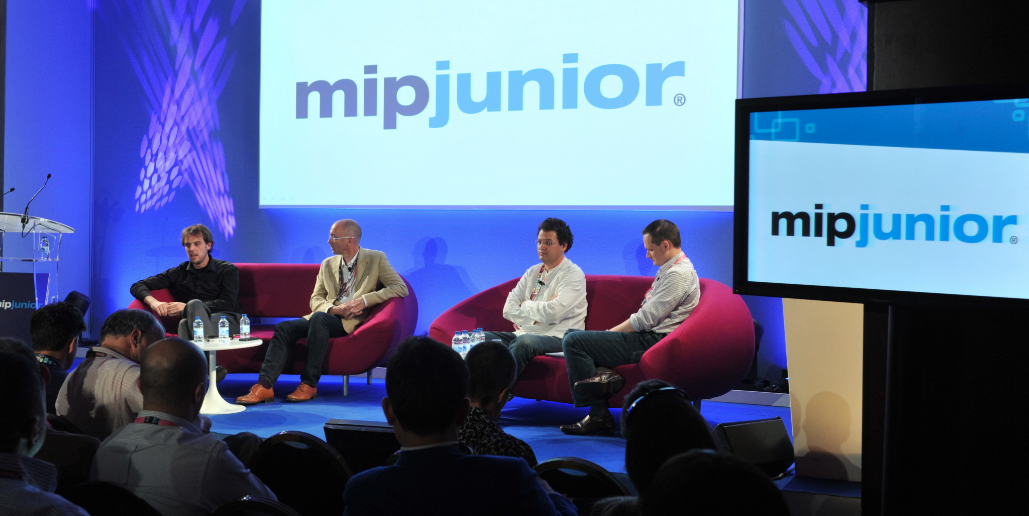 France Télévisions, Huzutech and Digital Outlook Communications on the potential of new platforms, at MIPJunior
By Stuart Dredge on October 1, 2011 2 Comments

A plethora of digital platforms are presenting creative opportunities for TV properties, but are the business opportunities just as appealing? The second panel session of the afternoon at MIPJunior focused on this exact point, exploring how best to go after ‘non linear money’.

Mason started the session with a quick presentation on key market trends. Including: Flash technology isn’t dead; Everything is mobile; social networks are not just dumb platforms; apps are everywhere; emergent economies like Brazil, India and Indonesia can confound many assumptions from the West; and finally: “Don’t confuse new forms of technology and ways of viewing as meaning that the people themselves have changed…

Next up was Maurice Wheeler from Digital Outlook, which works with clients’ brands across iPhone, Facebook, websites, Flash games, events and other forms of content. The company also has Digital Outlook Studios, which creates its own IP including something called Zoikz, aimed at kids.

Zoikz launched as a web game, with Digital Outlook working with online gaming firm Miniclip on the game itself, then taking it to Zodiak Media Group to help on the characters and stories around the Zoikz world. And then Egmont was brought on board as a comic and book publishing partner.

The first game has been played 20 million times, at around 14 minutes per session. A second game notched up 25 million game plays of 11 minutes each.

Key learnings? “Partner partner partner,” said Wheeler. “As soon as we got Miniclip on board we could start talking about numbers like 20 million, which in turn started getting people like Zodiak Media Group interested.”

Next up was Harvey from Huzutech, which has a social gaming platform aimed at helping IP owners build their own virtual worlds. “Your audience wants more than a flat website and a single-player game,” he said. “They also expect to be engaged on more than one platform, whether it’s a web browser, an iPhone, an iPad and so on… And we know this audience is spending billions of pounds on virtual goods and digital experiences.”

He gave some examples, including Moshi Monsters‘ 15 million registered users, and the £60 million of associated merchandise sales. “They’ve taken an original IP, developed a virtual world online, and then taken that as a transmedia property and generated this new revenue stream“. He also talked about Disney’s Club Penguin with its 150 million registered users (of whom 40 million are paying subscribers) and more merchandise spin-offs.

Finally: FightMyMonster, a monster-fighting web game for 7-12 year-old boys, with 250,000 registered users in the UK in its first six months, playing for an average session time of 30 minutes. It’s already being talked about in connection with a possible movie.

What makes a virtual world successful? Harvey talked about quests, rewards and engagement, as well as gamification, quizzes and a strong narrative. He also said producers must think about how a virtual world might fit into their properties, while also asking the thorny questions about who’ll pay to build and then maintain it, not to mention what devices it should be on. He also gave an idea about costs – anywhere between $75,000 and $300,000 depending on whether companies want a simple prototype or a fully-blown virtual world.

Third to speak was Borde from France Televisions. “We have changed a lot of things to face that revolution,” he said, talking about new digital platforms. “We think it’s a good way to monetise and to make our brands successful.” France Televisions has worked on apps, but also on massively multiplayer online games based around shows for kids.

“This year we are launching three new apps,” he said. One for children’s TV property Didou, and other with Chorion for Oui-Oui (the French name for Noddy). And third, a hybrid music show mixing live video and animation called Le Carnaval des Animaux avec Camera Lucida. The first of those is already live, and successful according to Borde.

“We think the kids industry knows how to partner with many companies all around the world on any project,” he said. “In that new universe, the kids industry has everything to make a big success… And we do believe public broadcasters have something to say in that universe.”

Who pays for the children to subscribe to these virtual worlds and services? Borde said parents are generally happy to pay, if they feel that an environment is secure and safe. Meanwhile, Wheeler said Digital Outlook’s most recent focus group found that it’s still mainly a cash economy for teenagers – they often don’t have bank cards even – “so realistically you are looking at the parents“.

He also dampened down the hype around virtual goods, pointing out that Club Penguin and Moshi Monsters have gone down the subscription route rather than virtual goods, while also making money from branded spin-offs. However, Harvey talked about a hybrid model: a subscription with micropayments on top: “A lot of this is just suck it and see,” he said, suggesting that there is still plenty of experimentation to be done.

The panel were asked for their advice for producers looking for the best way to take their properties onto other platforms. “Make sure you get your distribution sorted first,” said Wheeler. Meanwhile, Borde said “Make sure your content does resonate with what kids are expecting“, and Harvey said that producers must do market tests of concepts, then prototypes, before launching a full virtual world or social game.

Meanwhile, Wheeler said Digital Outlook made an app for the Fantastic Mr Fox movie, and managed to sit down with Apple for some advice in advance, in order to make something likely to get a featured spot on its App Store. “We sat down with Apple and said what kind of content are you looking for?” he said, while admitting that the company is “notoriously a nightmare” to cold-contact for developers and producers hoping to pursue a similar strategy.

As another alternative, Mason added post-session that Telefonica’s BlueVia programme is also a potential source of advice, distribution and technology partners in the apps space.

And that, as they say, was a wrap!