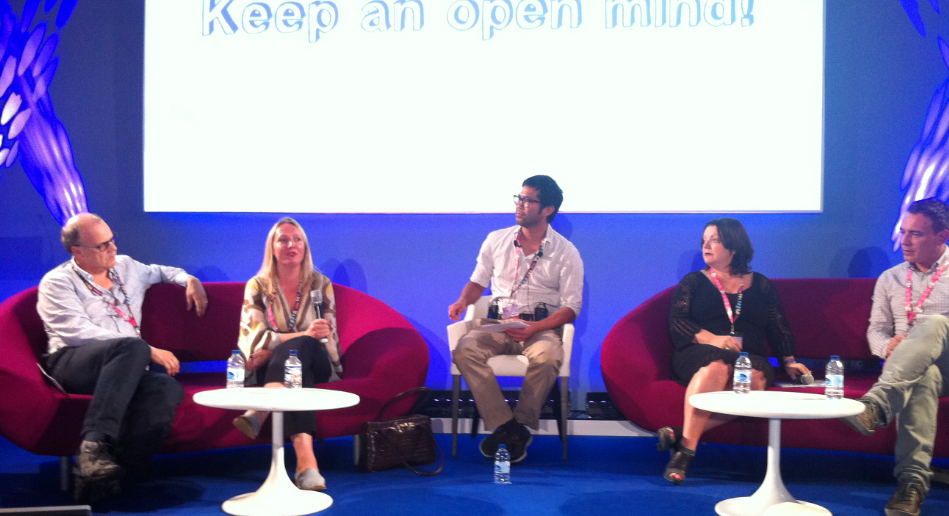 We’ve seen an increasing number of partnerships between book publishers and TV producers in recent years, as the two industries look to work more effectively together on adaptations. This afternoon, MIPJunior and the London Book Fair teamed up for a session examining some successful examples.

“Sales of TV books represent the largest portion of the global licensed publishing business,” said Huang by way of introduction, although he also warned that there is more competition than ever for these titles, for example from digital properties like Club Penguin and Moshi Monsters.

Macqueen kicked off the presentations part of the session, talking about Darrall Macqueen’s work on Baby Jake, a series revolving around the idea of a baby talking, and being translated by his older siblings, while embarking on all manner of animated adventures.

“Some people got it straight away, and some people didn’t,” admitted Macqueen, referring to the licensing discussions with broadcasters around the world. Interestingly, a famous YouTube video called Charlie Bit My Finger was apparently the tipping point for convincing US broadcasters that a show like Baby Jake would appeal beyond under-twos.

What about book publishing? Darrall Macqueen said the keys include “partners who you trust and can have a laugh with”. At this point, Egmont’s Cairns-Smith chimed in. “You have to love it,” she said. “All of us from day one were just ‘We love this show!’. But you also have to believe that the books can bring something extra… You have to believe that as a publisher you can develop more of the world, more of the story and have a reason for the books existing.”

Cairns-Smith said more generally, Egmont looks for strong story arcs in TV shows when considering adaptations, as well as a unique voice. “The absolute key thing is what I call a meeting of minds,” she said. “You have to have that first creative meeting with the TV company and you have to say ‘yes, we all get the same idea’.”

So much for turning a TV show into a book, but what about the other way around: adapting books for TV? This is where McAleer and Rice stepped up to present a case study of Tilly & Friends.

Walker Books has been building a digital publishing programme and growing its in-house licensing division in recent years, as well as setting up its own production company, Walker Productions. Why? “We felt it was a good idea to maybe keep some of the rights in-house rather than automatically pass them on to a third-party,” said McAleer, although she clarified that no deal is the same. “This was about taking us up the value chain and earning us more money as a company, and also for authors and illustrators.”

So, to Tilly & Friends. It’s derived from six books acquired in 2006, including world language rights, merchandising and TV/film rights. “We always felt this would be something that could possibly be a good opportunity for a TV and licensing brand,” said McAleer, although she said author Polly Dunbar has remained in creative charge of the series. Walker Books will also be publishing TV tie-in books when Tilly & Friends airs on TV.

Dunbar’s lack of preciousness about the characters has been hugely important to the development of the TV series, said Rice, who said funding has come from the Irish Film Board and licensing deals with CBeebies and other broadcasters around the world.

“The quality of the storytelling is key, and key across every opportunity,” concluded McAleer, while also saying it’s vital to invest in new opportunities, while not neglecting your core business – whether that’s book publishing or TV production.

Onto the panel element to the session. McAleer said that producers and publishers working together as early as possible in a project is the best scenario for these partnerships. “Where things tend to fall down is when a publisher comes very late to a project and it’s already well into production,” she said. Macqueen also said that working together at an early stage can also help when raising funding.

The panel were also asked about apps, and whether there are opportunities here. “Particularly tablet books and around animation where you can use the assets from your TV production and put them into the books. It’s a no-brainer,” said Rice. “Books have been moving towards moving images anyway,” added Macqueen.

McAleer was much more wary though. “I’m not 100% convinced that apps is the right way to go,” she said. “I’m still not convinced that the investment one has to make for an app, that the return on investment is good enough.” She said Walker Books is more excited about the ePub 3 e-book format, which is expected to make its debut in 2012, and will allow illustrated children’s book publishers to sell their titles as standard e-books.

McAleer wasn’t the only app-sceptic on the panel, either. “I have to concur,” said Carns-Smith. “With an e-book you can sell it at pretty much the same price as the book, but as soon as you put that on an app you have to sell it at 99p… There are real commercial issues around it. It is far more expensive for us to make an app than an e-book, and yet we can charge far less for it. That’s the conundrum.”

Huang chipped in with Penguin’s perspective, saying that launching a new IP as an app is touch: “Apps have worked for mega brands like Peppa Pig and Thomas the Tank Engine, but launching something with an app is very risky.”

Meanwhile, Macqueen talked about his experience with the huge social media buzz around Baby Jake when the series first aired on CBeebies in the UK. “Twitter went nuts, Facebook went nuts, and the parental messageboards went absolutely haywire,” he said, suggesting that this was both exciting and frightening for Darrall Macqueen. “As a producer, you’re used to controlling stuff. It’s quite a scary world, but as producers we have to learn to interact with that.”