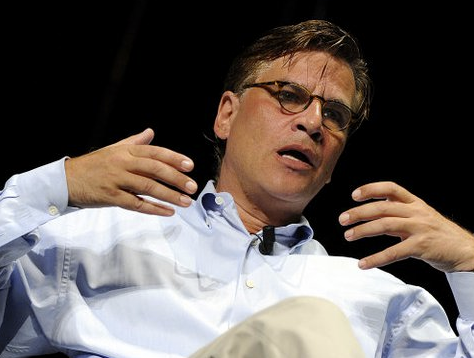 For global giants and creatives Aaron Sorkin (photo) and David Simon alike, this is the start of a brave new world
By James Martin on June 22, 2011 0 Comments

A special focus on TV at the Cannes Lions advertising festival today gave rise to some fascinating reflections on the future of TV. Proceedings began with a connected TV presentation from Samsung, which notably revealed that the manufacturer’s research had shown that for consumers, “connected TV” above all means “apps.”

The research could well be right: 5 million Samsung TV apps have been downloaded to date. Whilst the fifth most popular app is amusingly “How to tie a necktie”, the number one app is vTune Radio, which allows you to listen to the radio on your TV. Further proof that, as Google chairman Eric Schmidt put it later, “with gigabit internet, the distinction between tv and internet & radio disappears.” We may as such already be in the era of entertainment as a stream…

The panel’s theme was what TimeWarner sees as “The golden age of TV. Everywhere”. For Bewkes, we are currently in TV’s second golden age, firstly because “there’s a lot of great stuff on TV, and a huge migration of talent to TV. Viewers & quality are up; it’s no longer mass-market TV, rather bold, targeted programming.” The second factor behind this golden age, said Bewkes, is “TV going on the internet” (and not, as he pointed out later, “TV versus the internet”).

“So does this mean the end of TV as we know it?” asked Morgan. “Well, there’s the big screen on the wall of your lounge, and there’s the small one you take with you,” said Bewkes. “You’ll soon be able to see whatever you want on either of those screens, anytime. It’s going to bring tremendous vitality. And if people are more engaged, it’s a good thing (for brands). Furthermore, you don’t have to give the same message to every viewer.”

This ‘targeting’ point was also made by Google’s Schmidt later, underlining its importance for TV advertising moving forwards. “People are worried about the role Netflix is playing in movie distribution,” said Schmidt. “Whereas they’re succeeding because they know their consumers. A TV should know not to show nappy ads to people who don’t have children,” said Schmidt, promsing Google TV would be capable of such a feat, one day.

So what is the impact of this innovation on TV creatives? Said Simon, “When we started The Wire, we knew it was complicated (plotwise), but as HBO was showing it 3 times a week we decided we could get away with it. Now that TV’s no longer appointment-based, rather a lending library, that serves complicated stories, because as a writer, you know people won’t miss an episode. That’s revolutionary.”

“I think and hope we are (in a golden age),” said Sorkin. “The best theatre in the US is on TV right now, because the best talent is coming from theatre and film to TV. We’re beginning to overcome the passive relationship viewers have with TV, and that’s great for us. And happens to be great for advertisers too.”

Key to the “golden age” of TV, then, is the notion of limitless choice for consumers in the post-scheduled TV era. The content offering of TV, said Bewkes, is “like books now. There’s everything from best sellers to lesser known works.”

What this means is new opportunities for edgier works like The Wire. “The renaissance now is that you longer have to reach 50m people to survive,’ said Sorkin. “The Wire is one of the most-talked about shows in the world and many would say it’s the best TV show ever. But its ratings couldn’t stand up to the biggest flop.”

Faced with this overwhelming choice of new content, Google naturally has an answer: search. “Look at YouTube’s billion views a day ; most of this is user-generated content,” said Schmidt. “You’ll never be able to watch all of those videos. So it becomes a search problem. We need to move past the search box model, so we should know what you’re searching for. With your permission, we could select videos based on what you watch, or suggest content to your mobile phone based on your location.”