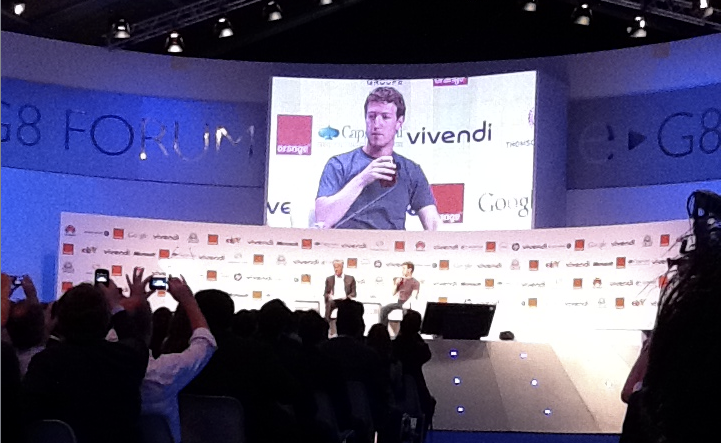 Social is key to future of entertainment business, says Zuckerberg

Speaking at the eG8 forum in Paris, the Facebook founder praised the success of social gaming: he's "excited" to see which entertainment sector will explode next
By James Martin on May 25, 2011 0 Comments

Asked by moderator Publicis Groupe’s Maurice Levy why Facebook has been so succcessful, one of the reasons the 27 year-old billionaire gave was that “the best things rise to the top”; and they do so very quickly. When once told it’s a bad thing that films, for example, can get killed on Facebook even before they’re released, Zuckerberg said on the contrary that it’s “great” that opinions can be shared so quickly. “So was The Social Network such a huge success thanks to Facebook?” quipped Levy. “It was a well written movie,” conceded ‘Zuck’.

More importantly, the head of Facebook developed a key point he has already made elsewhere: gaming has been a huge success on Facebook, and seeing which creative industry will be next to see such explosive growth on his platform is “the thing I’m the most excited about over the next five years.”

“Four years ago, we opened up our platform (to app developers): since then, gaming is the industry that’s taken off the most. (Farmville creator) Zynga has now surpassed EA, the incumbent leader, in terms of market capitalisation, because they understood that people want to play with their friends. They make games with social baked in. Gaming is a naturally social thing. Next is music, books… all sorts of other industries.”

Does this mean Facebook will move into these sectors itself? “We don’t have the DNA to be a music company,” said Zuckerberg, “but we want to play a part in making those industries more social.”

In the future, he predicted, those who succeed in media “will understand music AND people, movies AND people; that’s not always the case today. The next big companies on Facebook will have to be inherently social,” said Zuckerberg, citing once again the case of music, “because you listen with your friends. So the opportunities when you make things social are much bigger.”

The Facebook founder later cited video streaming service Netflix as a company that had truly understood social. The service encourages sharing as a way to expland its user base, “so you get free months’ subscriptions if you tell your friends about Netflix,” said Zuckerberg. “When they looked closer, they found the altruistic dynamic – i.e. you give your friends free months’ subscriptions – was a much more powerful way to grow their user base.”

In other words, watching and learning from social media is the key to success moving forwards. N’est-ce pas?!

More from the eG8 forum soon: watch this space!