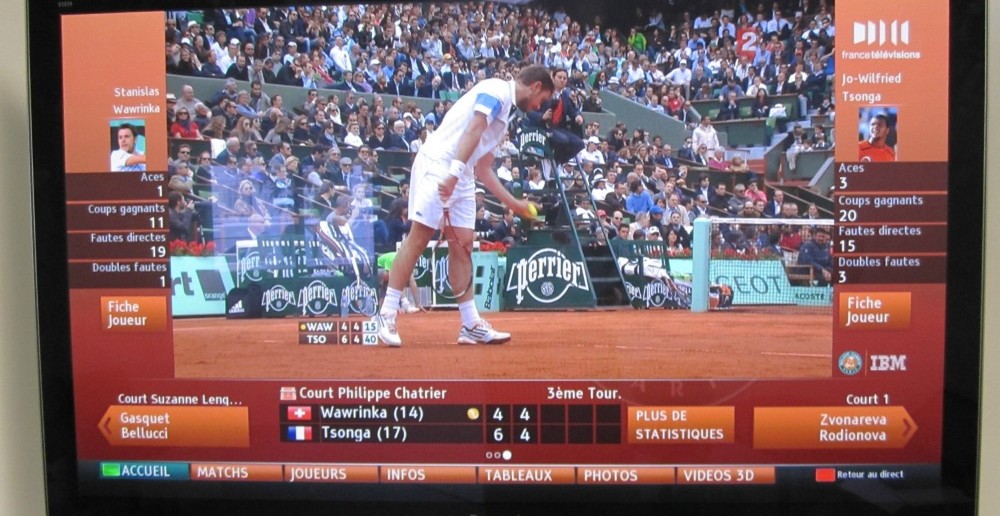 HbbTV is currently being tested live at international tennis tournament Roland Garros. MIPBlog was treated to a demo!
By James Martin on May 31, 2011 0 Comments

The demonstration offered by IBM and national broadcaster France Télévisions at the French Open tennis tournament is the first time the format has been broadcast in France. All users require is a compatible set (in this case, a Panasonic Viera TX-P50VT30E, worth around €2000) and an internet connection.

Then, when they choose France 2 HD via a standard digital terrestrial signal, they are prompted to press a button to bring up the above interactive display. Everything is controlled via the TV’s remote.

Features offered in this particular application include:

The only services lacking, in our view, are social aspects such as a check-in function, which could easily tell Facebook friends or Twitter followers whatever I’m watching right now. TBC for a future version?

IBM provides the service’s cloud platform, and co-developed the app with French interactive TV service maker WizTiVi. The same match stats displayed on standard TV, as well as on the tournament’s website and mobile apps, are used throughout the HbbTV app.

The initiative was kicked off by Bernard Fontaine, director of France Télévisions Interactive, who asked IBM in January if the project was feasible in time for the French Open. Given that the tournament’s TV audience peaks at 4.3 million viewers in France alone, the potential was huge.

Whilst it is unclear how many French homes possess HbbTV-compatible sets right now, the aim is clearly to use the format on forthcoming major broadcasts. Watch this space…

You can read a more tech-focused review of the service by French tech blogger Olivier Ezratty, translated into English by AppTVMarket’s Richard Kastelein here.