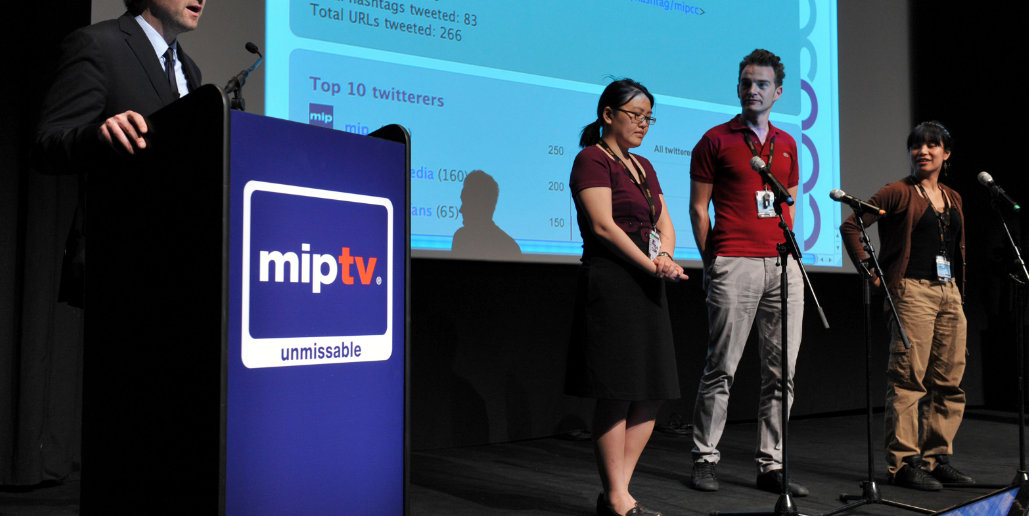 The key digital trends from this year's show, with maximum audience participation
By Stuart Dredge on April 7, 2011 0 Comments

JumpWire Media‘s Gavin McGarry (left) gave the final session of this year’s MIPTV, outlining the important trends and topics from the show, and its new Connected Creativity Forum spin-off.

“This has been an incredible MIP for Twitter,” he said by way of introduction. “6,000 tweets, lots of retweets, people engaged in conversations… fantastic!” He then showed a presentation outlining some of the stats showing the growth in social media in recent years.

He also talked about the key trends for the next 12-18 months. Six months ago, it was ‘data, web video, mobile’. Now it’s data, mobile, web video. “We are all collecting data,” said McGarry, stressing that it’s vital to collect and make sense of as much data as possible. “comScore, Nielsen and the rest of these old guys who do data do not do data very well,” he said.

Web video? It’s still very important he said, but “probably the next time I talk to you, mobile will be number one“. He referred back to the presentation at CCF by Tomi Ahonen, where he finished by showing how his phone can project onto the wall. Ahonen is based in Hong Kong, so it’s a handset that’s available there.

McGarry also talked about comScore data showing that Android has now passed iPhone and BlackBerry for US smartphone subscriber share – something that was reported in early March. “People can buy them for $149, and I think they’re going down to $99,” he said about Android handsets. He also warned about “serious problems” making apps for the Android platform, due to its fragmentation.

“There are 36 Android phones coming out this year, all from different manufacturers. Each one, much like a PC, when you use different PCs, you have to programme for those. And it’s leading to significant problems.”

McGarry also talked about Warner Bros’ announcement in March that it’s now renting streaming movies on Facebook, with people able to pay to watch using the Facebook Credits currency, and chat with friends around the film.

“There’s a huge battle going on here,” said McGarry. “Netflix is paying serious money for good content… They’re paying top dollar for really good programming. They’re becoming a broadcaster, and there’s a war that’s going to happen here. Massive. And this is happening around the world, not just in the US.”

Next, McGarry talked about BitTorrent, and its work with TV shows like Pioneer One and The Tunnel. BitTorrent shares a VC firm – Accel Partners – with Facebook, and there is a partnership afoot between the two. In the meantime, Pioneer One has released three episodes through BitTorrent, having raised the money to make the sci-fi series on crowdfunding site Kickstarter.

The producers have raised $55,000 in audience donations, and $30,000 in sponsorship. Meanwhile, McGarry said there are more than 100 million monthly active users on BitTorrent globally.

He said there was also a lot of negativity at Connected Creativity Forum – people fretting about whether there are too many screens and too much TV, and what impact that might be having. “We should be really excited,” he said. “Yes, kids are gonna watch lots of screen time. It’s not our fault, it’s their parents’ fault. If you’re not going to limit your kids’ screen time, why don’t you just have them smoke cigarettes?”

McGarry also recommended a book called Everything Bad Is Good For You (photo) by Steven Johnson, which puts an alternative, more positive view of the impact of TV.

Next: a case study from what JumpWire Media has been doing. It worked on a project for a book called Crazy Sexy Diet, to help promote it online.

One piece of advice: “Read the Facebook rules, because they’re pretty strict, and they change all the time.” JumpWire also used a service called Meetup to help fans of the diet book meet up in the real world. “It was important for them to use the onling to get offline,” said McGarry. “There’s a lot of people who want to engage with your product or brand offline.”

Onto the themes and trends of the Connected Creativity Forum this week, with McGarry getting a host of other MIP attendees up onto the stage to talk about their experiences. First up: Media City Finland’s Simon Staffans, a prolific tweeter throughout the MIP shows & regular guest MIPBlogger.

“The convergence that everyone’s been talking about – everyone is getting that we need to be on all platforms… but users and viewers are no longer users and viewers. The audience is as much a part of your story now as the story itself. I like that.”

Staffans also said he was interested by the challenge posed by CCF speaker Tomi Ahonen, who said the TV industry needs to make more use of SMS and MMS, rather than just focusing on apps.

Fellow liveblogger Angela Natividad (right) talked about a theme of the show – the brain – and the fact that people are now voluntarily sharing lots of information about themselves. “One of the interesting things about Twitter is the barrier to publishing is so low… People forget they’re publishing, and talking to the entire world… Over time, people end up telling the truth – about themselves, about products, good and bad experiences they have had. It’s the closest thing we have to reading minds.”

MIPBlog editor James Martin (centre right) was next. “From a content point of view, the session that stood out most for me was Matt Mason – what we can learn from piracy… Whatever the content is, it’s all about access.” And he said that it wouldn’t have been possible to have BitTorrent at a MIP event two years ago – “But it’s now about embracing something that’s very exciting.”

JumpWire’s Soo Koon Lee (centre left) said she was excited about Kevin Slavin’s presentation when he talked about the changing nature of audiences, where even the stars of TV shows can become the public audience, tweeting about a show while it airs. Howard Stern and Anthony Bourdain have been high-profile recent examples.

McGarry also got BitTorrent CEO Eric Klinker on stage at the end of the session. He asked Klinker about how BitTorrent is working with content in a legal way. “It’s a technology that makes distribution free, and we have a monthly audience of 100 million people,” he said. “If you’re looking for ways to try and get your content discovered, we think we have a pretty interesting audience.”

McGarry also got BitTorrent CEO Eric Klinker on stage at the end of the session.

He asked Klinker about how BitTorrent is working with

content in a legal way. “It’s a technology that makes

distribution free, and we have a monthly audience of 100

million people,” he said. “If you’re looking for ways to

try and get your content discovered, we think we have a