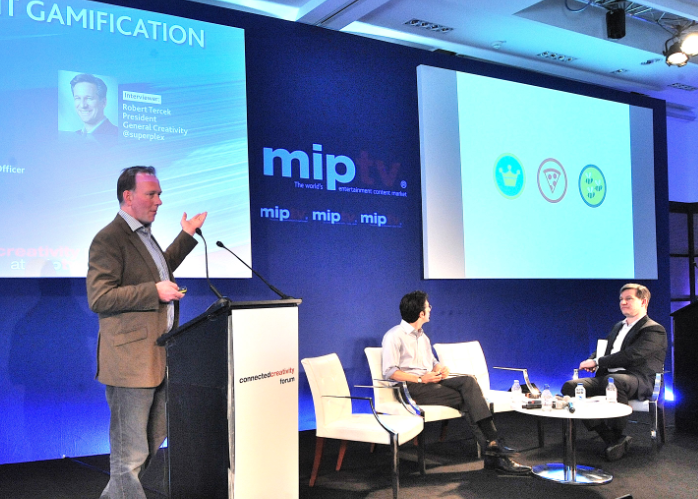 Liveblog: Entertainment gamification in the spotlight

Starling & Scoreloop on the impact and potential of game mechanics in the modern entertainment industry
By Stuart Dredge on April 6, 2011 1 Comment

Gamification is a huge buzzword right now in tech circles, and had its own session at the Connected Creativity Forum. Starling co-founder Kevin Slavin and Scoreloop chief strategy officer Volker Hirsch enjoyed a two-way session debating some of the opportunities around applying game-like mechanics to other forms of entertainment.

Slavin used to work at game developer Area/Code, which started in location-based games, but broadened out into a company looking at how game dynamics can be applied to a range of media. “The idea that games could start to affect things outside of the game world,” he said, before saying he doesn’t like the word ‘gamification’. “I don’t advise anyone to use it!”

Slavin talked about a 2008 game called Parking Wars, designed to promote a TV show, but which ended up having 50% more players than the show had viewers, and those players spent more than two times the number of hours playing the game than the TV show was watched. “What happens with games that’s so different from conventional media, whatever you’re watching is going to be – arguably – less valuable tomorrow, or the tenth time you watch it… But when you play chess, the tenth time you play chess is way more interesting than the first time.”

Slavin also took aim at some of the assumptions made in the gamification debate. First: that adding a game to something automatically makes it fun – when in fact, most games aren’t that fun. Second: ‘pointsification‘ – mistaking giving people points as the key thing, rather than seeing points as just feedback and rewards for playing the game itself. “When points are just smeared on top of experiences, that’s not a game. That’s just points.”

Slavin did say he had learned three important things from working with game designers. First: games provide a model for the role of luck, in a way that’s satisfying in a way that it isn’t always in real life. Second: games have a dream of meritocracy that again may not apply in real life. “If you work hard at it, you will advance” – something that’s as true of Foursquare as it is of World of Warcraft or chess.

Third: the value of overt constraints. “Chess wouldn’t be more fun with fewer rules. Foursquare wouldn’t be cooler if you could do a million other things besides checking in. The expressiveness within human communication – the desire – is actually to find boundaries, to find those edges within which to do something meaningful.”

In other words, Slavin thinks content companies should not be looking to slap gamification onto their content, but that if they spend a bit more time with game designers, they will learn some of these ideas.

Scoreloop’s Hirsch was up next, talking about the Scoreloop social mobile gaming community, which is currently adding more than one million users a week, playing games that use its platform.

He started by asking how companies get people to their offerings or content. Traditionally, there has been coercion – “the stick approach: you threaten” – or something more positive – “the carrot”. Applied to TV, the challenge is that screens multiply – it’s much harder to keep people watching one TV screen using a carrot or a stick.

Onto gamification: Hirsch said games use ubiquitous mechanics, like peer-to-peer challenges, high scores, virtual gifts, achievements and rewards, and virtual cash. He also gave a few examples, including the dashboard of the 2010 Ford Fusion hybrid, which has a built-in virtual plant – “like a tamagotchi” – which thrives the more economically you drive. “You can actually trigger behaviour by using very very simple mechanics.”

“Gamification is about augmenting experiences with ubiquitous mechanics that are fun,” he continued. “If you do that, you have a ton of opportunities here.” But he warned that “if you have a shit game, it will remain a shit game, no matter how much social you do to it” – and applying this to TV, a “uni-directional” TV show with no wider engagement with its viewers cannot suddenly become a social media tour de force through a few game mechanics.

Moderator Robert Tercek asked about some of the not-so-appealing games that appear on the websites of TV companies. “If it’s chess with Simpsons characters, it’s more about the Simpsons than it is about chess, and that’s not the idea at all,” said Slavin, although this was presumably a notional example, rather than an actual game.