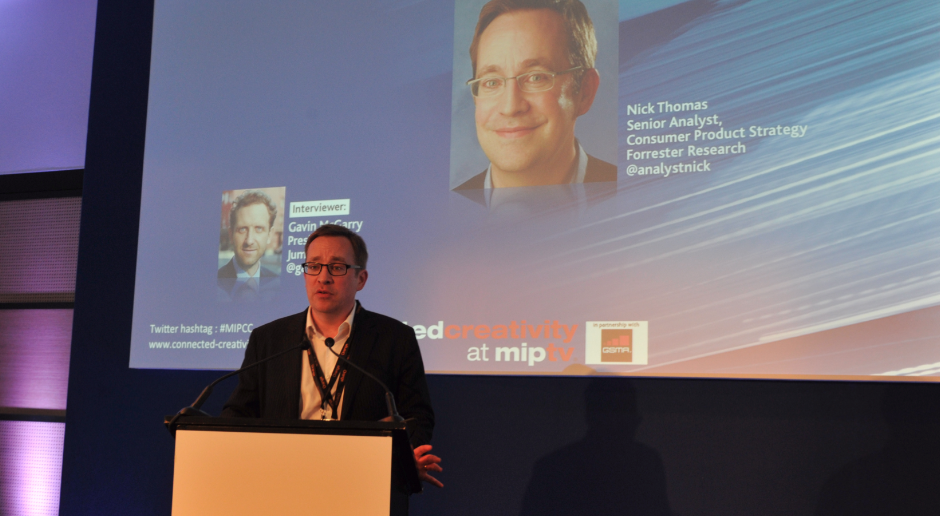 There are lies, damned lies and statistics. Well, Connected Creativity Forum (CCF) had plenty of statistics this afternoon, with a triple whammy of research. Forrester, Digital Media Wire and mobile industry author Tomi Ahonen outlined some of the key consumer, media and technology trends from around the world.

Here’s our rundown of some of the more interesting trends:

– “We surveyed 14,000 European consumers and asked what kind of digital content have you paid for in the last month, and what would you pay for in the future? The only conclusion we could draw is much content is failing to connect with those consumers… Digital content is just not working.” 3% have paid for digital TV shows in the last month, while 14% say they would do so in the future.

– Consumers’ expectations of content are changing, as their digital behaviour changes. They like to watch video from other users, visit social networking sites, read customer ratings and reviews of products and services, read forums and blogs. “30% of consumers regularly read blogs, and 21% comment on blogs,” he said. “People are interacting with content, and these things are becoming mainstream.”

– Content is now social, and in some ways always has been – gigs, cinema, theatre… “Let’s call out Facebook specifically… we see Facebook as blurring the definition of content,” he said. “Facebook is also now an important platform for consuming content… It is now one of the top five sites for viewing videos in the US and in Europe.”

– Multi-tasking is also important: millions of people are interacting with TV content on “complementary screens”, especially among young users – via instant messaging, email and Twitter. In Europe, 50% of people are regularly online when they’re watching TV. He stressed that older users are more likely to be doing something unrelated to the TV show on their devices, while younger people are more likely to be doing something related – chatting about a show to friends for example.

– Connected TVs will link to other devices. “This is a landscape where consumers are already connected,” said Thomas, before saying that Google TV is onto something with its idea of a television meeting a search engine. “We generally over-estimate the short term impact of new technology but under-estimate its long term impact. If I come back in 10 years’ time, we can talk about the long term impact of Google TV.”

– By 2015, Forrester forecasts that the app market globally will be worth $38 billion. Thomas also talked about Android phones becoming universal remote controls for people.

– Thomas is excited about the PrimeSense technology behind Kinect, which is only licensed to Microsoft for gaming. “Once this goes beyond gaming… how do you find content on a connected TV when there are hundreds and thousands of channels? Navigation is crucial. Google will be important, but so will Kinect. The notion that you just point at your TV…”

– “We are moving to an era of experience,” he said. “Experience is your product… Content alone is not enough.” He said companies must not just digitise the content, but digitise the customer relationship – Thomas cited Netflix and Amazon as key examples of companies doing that well.

– iPad and tablets are a completely new entertainment platform, having only launched in April 2010, with 17 million sold in its first year. And many more are being launched, with prices dropping – 295 million tablets in the market by 2015 according to Gartner. And 56% of peopel who bought the iPad said they did it for entertainment.

– iPad users are much more likely to ‘cut the cord’ in the US – give up or downgrade their satellite or cable plan. And Sherman talked about Time Warner Cable’s launch of an iPad app, treating the tablet as just an extension of the television. 300,000 people downloaded it, but the content industry is angry. Fox and Viacom sent cease and desist letters to have their channels removed from the service – “the content owners see this as a new device to programme for – they wanna have their own apps and maybe charge for those apps“.

– Sherman talked about Facebook as an entertainment platform too, following Forrester’s Thomas’ line of thinking. People spend five hours watching TV a day, but in 2010, 55% of internet users spent 2.9 hours a day on Facebook.  He cited a comScore stat showing 42 million people watching videos on Facebook for around 15 minutes a day. And he explained that Warner Brothers is streaming movies over Facebook using a rental model, paid for with the Facebook Credits virtual currency. Facebook may be competing with Netflix in the future – “the day Facebook announced its plans with Warner Brothers you saw Netflix shares fall 5.8%,” said Sherman, citing a similar slump for rival Redbox.

– Sherman also talked about a deal with Major League Baseball. “They’re gonna be streaming certain pre-season baseball games for free over Facebook. There’s a lot of speculation that this is just the beginning of a larger deal with Facebook,” he said. “Sports probably will pave a lot of the way. With live events like that there’s really a great opportunity to monetise… And there’s a lot of discussion around sports that makes it a natural for doing deals with Facebook and other social networks.”

– Sherman also talked about the “gamification of online video”, with points and reward mechanisms around the co-viewing of content, with avatars possibly in the mix as well.

– The first television content made available for mobile download came in… 2001. Which is the same year the first TV-show voting happened on mobile phones. “And SMS voting is now a $3 billion business around the planet!” said Ahonen, hailing MTV for that early experiment.

– There are 5.2 billion total mobile phone subscriptions globally – versus 1.7 billion TV sets. “You think size is important? No, that’s only the start,” he said. The average person looks at their mobile phone 150 times a day – once every six and a half minutes. But more astonishingly, “10% of youth think it’s okay to send text messages while having sex,” he said. Addiction.

– Ahonen warned the industry to forget smartphones and apps. “There are about 100 million iPhones on the planet. Now multiply it against all mobile phones. That’s 2% of your audience! If you develop an iPhone app and you are a media brand, you are deliberately ignoring 98% of your available audience. That’s a pretty rotten strategy in my mind.” And all smartphones account for just 17% of the world’s handsets.

– He poured scorn on Facebook and Twitter, pointing out that MMS has 2.4 billion active users today. “MMS is bigger than the total internet! The planet’s biggest multimedia platform. If you’re in television today and you don’t understand MMS, you’re a dinosaur! You’ll be out of business!” But he pointed to 4.2 billion active users of SMS – text messaging. “In India today, one third of all SMS sent is media, not person-to-person messages. This is your future.”

– Ahonen showed some examples from around the world, starting with SMS. The Idol format generated nearly $500 million from SMS voting in 2009. But beyond that? He said scriptwriters and producers should be taught to work with SMS – Ahonen cited Hollyoaks, the UK soap, where a character receives a text message that isn’t shown to the audience – but a message can be shown on-screen inviting viewers to text in to be sent the fictional SMS. “10% of your audience will pay for this, 90% won’t. That’s extra money for you.”

– Ahonen also talked about Japanese show Hoshi-Ishi Maniac, which used mobile avatars and interactivity back in 2008, working with mobile firm Artificial Life. 47,000 viewers signed up to compete with their avatars. “This is the kind of stuff we need to study,” he said.

– He was challenged about his views on apps, given the numbers coming out of Apple and other companies. Why haven’t SMS and MMS exploded in the same way that apps have? “I totally believe apps will be huge – they will be bigger than SMS and MMS, but it will take them ten years to get there,” he said. “Yes, they will be huge.” But he warned that SMS and MMS are not going away any time soon.