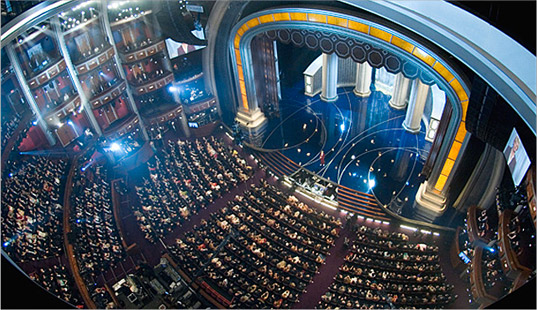 Stuart Dredge: The Oscars bang the gong for dual-screen viewing

The idea of dual-screen viewing, or second-screen interaction – people using their smartphones, tablets or netbooks to chat about what they’re watching on TV – is gaining currency within the broadcast industry.

It’s the showpiece televisual events that currently show the trend best: big sporting occasions like the World Cup or Super Bowl, primetime reality shows like X Factor and American Idol, and most recently The Oscars.

The King’s Speech, Inception and The Social Network may have taken home plenty of statuettes this year, but social media and second-screen interaction were the big winners. For proof, look at the statistics on how people used two social services – Twitter and GetGlue – during the Oscars telecast.

First Twitter. Two companies – Mass Relevance and TweetReach – crunched data on Oscar-related tweets from Sunday night, and shared their results with TechCrunch. They tracked more than 1.2 million tweets from nearly 390,000 individual users, with interest peaking at around 7.20pm during a comic Auto-Tune montage in between awards. 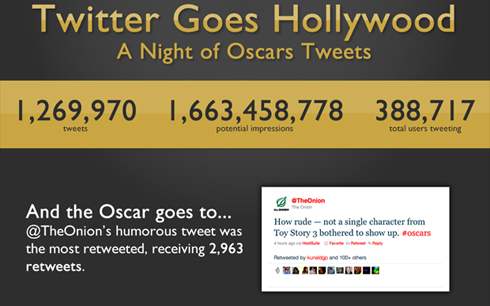 According to TweetReach CEO Jenn Davis, this isn’t even the most intensively-tweeted televisual occasion of 2010: at its peak, The Oscars was generating 12,000 tweets a minute, compared to 17,000 a minute for the Super Bowl and Grammy Awards.

GetGlue – a social entertainment service that lets people check in to TV shows, films, music and books while watching/listening to/reading them – didn’t scale those heights of traffic, but it did see a big spike for the Oscars.

It recorded more than 31,000 check-ins during the event, beating the 20,000+ recorded during the Super Bowl and 18,000 during the Grammys. GetGlue also claims to be the third most mentioned account during The Oscars, thanks in part to an embedded check-in widget on the Oscars.com website – this last stat comes from TweetReach’s data too.

The data is one of the most interesting parts of this story: the fact that all this social activity around TV shows can be tracked, and then sliced and diced at will. As it goes beyond pure ‘number of tweets’ information to more sentiment analysis – tracking positive versus negative reactions – the potential for broadcasters and producers to measure the creative peaks (and troughs) of their shows is huge.

There is still a lot of talk about time-shifting, DVRs, catch-up TV and on-demand streaming services in the TV industry, and for good reason – the impact of these technologies is being felt strongly by the broadcast industry.

However, some shows still qualify for ‘watercooler status’ – demanding to be watched live in order to talk about them with friends and colleagues. The difference now is that the watercooler is happening in real-time, on services like Twitter, Facebook and GetGlue, with new analytics tools allowing the TV industry to eavesdrop on every word.

The other fascinating aspect about this year’s Oscars was the way US network ABC tapped into second-screen habits with an official iPad app: Oscar Backstage Pass. Users could watch red carpet footage, backstage clips and the post-awards Governers Ball, turning iPad into a companion for ABC’s coverage of the ceremony itself.

Less interaction and more consumption, but still a glimpse at how broadcasters are getting to grips with the potential for second-screen apps.