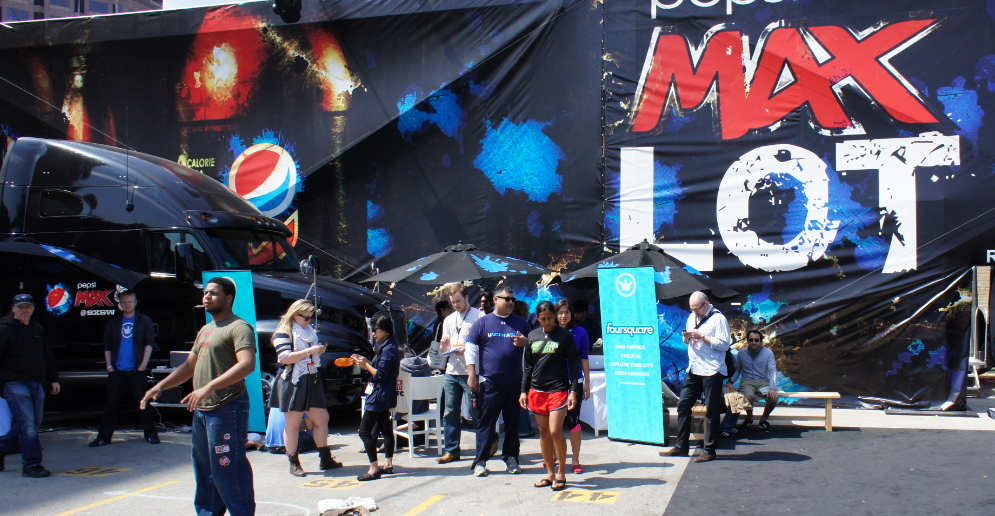 Photo: Foursquare on the Pepsi Max lot at SXSWi

Group texting applications such as Group.me dominated the SXSWi scene in Austin, Texas this year. Actually, anything with the word “group” or “crowd” seemed to be everywhere.

Business cards are now obsolete as most people were using Hashable to exchange details. I particularly liked Hashable’s competitor Domo, their one click sign-in and excellent use of the social graph were great features.

Dating app Grindr won my vote for the best user interface by reducing the normal 27 screen sign up process (eharmony) to just 3 screens. You are not required to sign up when you open the app, it just shows you all the potential dates in your area and, if you like what you see you register, this creates a reason for you to sign in and become a part of the community.

Foursquare was heavily integrated into the SXSW session schedule this year. Each of the session details were pre-populated with check-in information and made it much easier to see what all your friends were attending and what panels and sessions were trending during the day.

Transmedia panels were everywhere and it was one of the conference bingo words but geek goddess Felica Day was an especially refreshing transmedia keynote. You can watch her interview here and here.

Here is my list of favorites from the event:
– Biomimicry Panel – I am really into this at the moment and the panel was one of the best I saw all week. Biomimicry or biomimetics is the examination of nature, its models, systems, processes, and elements to emulate or take inspiration from in order to solve human problems.

– The Future 15 panel on innovative marketing case studies was fantastic. 10 presenters with 15 minutes each to let people know what they are doing in the space. PepsiCo’s Gatorade Replay was particularly good and iCrossing’s Adam Levelle had some great insights.

– With little surprise, the iPad 2 dominated SXSW with many people waiting in lines around the block to get their hands on one. At one point someone asked how many people had purchased iPad2’s and over a quarter of the audience lifted them up to show.

Finally, I think we may have hit the tipping point in digital media as a mainstream business. There were a considerable number of large American consumer brands present at the event including this year: Pepsi, Samsung, CNN, Chevy, Miller Lite and more. I over eard a few times that the companies were spending a lot of money trying to woo the geeks in hopes of enticing the community mavens to tweet about their products.

Now we turn our focus to Connected Creativity event at MIPTV and there is considerable amount of excitement on the Jumpwire Media team as we move to the global stage in the South of France.