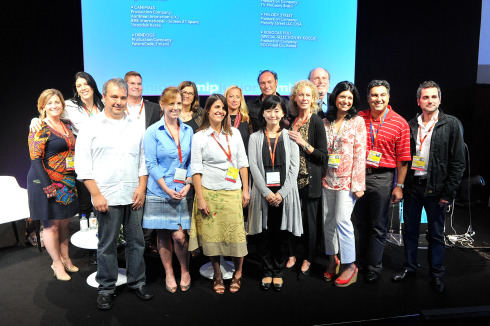 This and more in the MIPCOM daily News, online here soon!!

In an emotional acceptance speech, Lee Jun-woo, senior manager of ROI Visual, said Robocar Poli was inspired by its producer’s two sons. Her prize includes mentoring from members of the jury, plus a booth at the Licensing International Expo in Las Vegas in June 2011.

“RoboCar Poli was judged to have the most potential for an extendable merchandising programme,” said jury president Holly Stein, who is vice-president, licensing acquisitions, at Mattel.

The other five finalists – chosen from more than 80 entrants – were: 1001 Nights from Canada’s Big BadBoo; Canimals from Aardman Animation, BRB Internacional – Screen 21 and Voozclub (UK/Spain/Korea); Dibidogs from FutureCode (Finland); Earth To Luna from TV PinGuim (Brazil); and Melody Street from Melody Street (US).