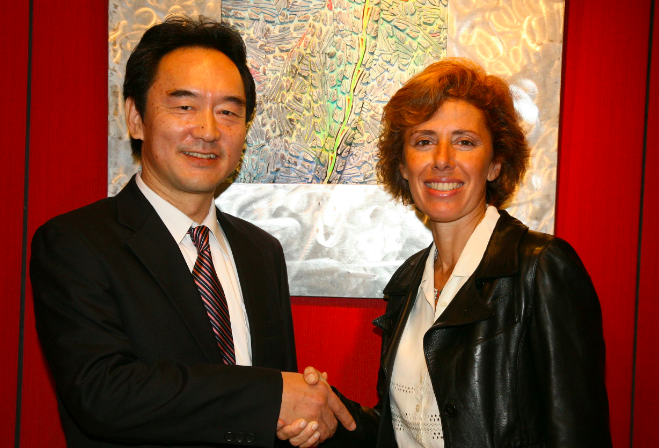 A co-production/pre-buy agreement signed by NHK and France 5 in 2002 has been renewed in the lead-up to MIPCOM.
By James Martin on October 7, 2010 0 Comments

NHK and France Televisions will extend their collaboration to include France 2, France 3, France 4, France 5, France 0. Under the new deal, the two companies will work together on landmark series and one-off documentaries that will either be co-developed and produced, or pre-bought by one party or the other.

Patricia Boutinard-Rouelle (right), head of documentaries for France Televisions said: “We are delighted to enhance further what has been such a strong relationship between NHK and France 5. It is the right time for an even more fruitful collaboration, which will allow all the channels of our group to participate, and enrich the partnership with their specific areas of expertise.”

The two broadcasters have enjoyed a run of shared success with joint projects, including Mammals vs Dinosaurs (2006), a two-part series that showed how our ancestors’ struggle to survive shaped the natural world we know today, and Evolution of the Moon (2009), which used HD images from the lunar probe Kaguya to reveal unknown truths about our moon. Recent joint projects initiated by France Televisions include Apocalypse (2010), which gives vivid insight into global war.