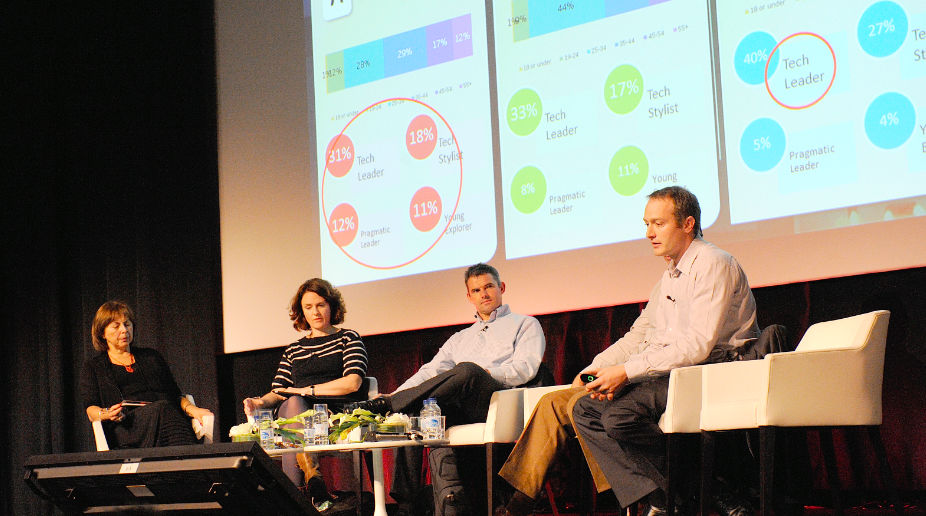 Bonus: The Key to Nipping Rights-Related App Problems in the Bud.
By Angela Natividad on October 6, 2010 0 Comments

This session, moderated by Ferhan Cook (left), yielded a panoply of useful app-building tips for those who knew how to cherry-pick.

New media commissioning manager Jen Topping of Channel 4 (second from left) kicked off with examples of promotional apps for the network’s prized shows.

Some of its objectives:

It counts down from 30 minutes or less, and he talks to you the whole time. You can also tickle his face, which he doesn’t like. (He eventually bites.)

Two apps she described are due to go live in the next two weeks:

Come Dine with Me’s app includes recipes to draw from, a dinner party planner and choice soundbytes from Dave Lamb “to liven up a dinner party.”

Meanwhile, comedy program’s Peep Show app is merely a “very fun, disposable game related to the show.” You can access various character soundbytes by episode, with the option to download that episode from iTunes.

Managing director Dan Witters of KIWA Media UK (out of shot, sorry Dan!) lent more practical perspective to Topping’s colourful illustrations. His background is in media law, and he warns people against the hazards of launching a promotional app on the tail-end of existing campaigns or media spinoff efforts.

When a piece of content enjoys lots of fame, scoring itself a nice tidy film or TV deal, all is well. These slow steps to infamy are well-rehearsed in the traditional media world. But if it manages to score a second season of its show, maybe another movie, things start getting complicated.

After production’s done, the marketing team might go, “This is great, we should make an app!”

The typical promotional app chain typically starts with someone creating content (say, JK Rowling writing her first Harry Potter book) and ends with an app developer. But in between, there’s a tangled web of licensing deals that can complicate, even kill, this seemingly innocent idea. Lawyers start filing in, representing the author, the illustrator who says she never agreed for her work to appear in an app, the translators whose work, they suspect, may just get lifted if the app involves any kind of translating; and so on and so forth.

There’s a really simple solution to this problem: add apps to contracts early on, alongside potential TV, radio and other potential spinoff material, while the content is still being made.

“It’s just one more clause” among other traditionally foreseen eventualities, Witters said. And it’ll save you a lot of headaches.

And, rounding all this out, Cedric Thomas (right), Nokia France’s OVI manager, provided some helpful mobile app universe definitions: what an app store is, variations (Apple’s App Store, Android Store, Ovi Store, etc), the definition of a smartphone and a market overview.

He pointed out that target audiences usually have one or two specific standout OS’s that their using (the medical field, for example, is a dense BlackBerry forest). Recognise what suits your users, and plan accordingly.