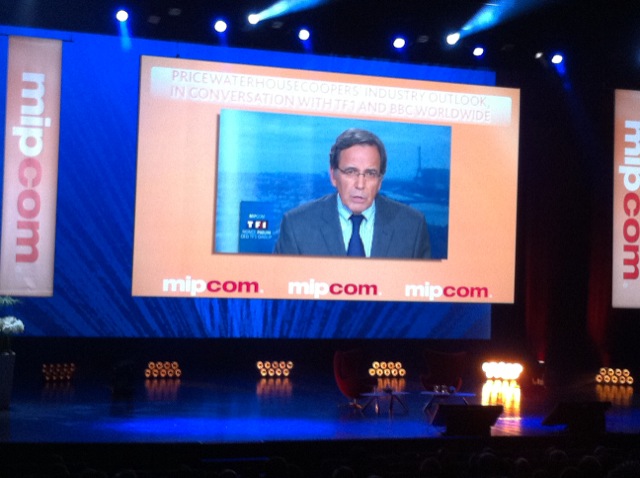 Where the industry is going, and what it all means.
By Stuart Dredge on October 4, 2010 0 Comments

The Grand Auditorium in the Palais was opened this afternoon for PricewaterhouseCoopers’ Industry Outlook session.

“2009 really was a watershed year,” he said, citing falling ad revenues, but also the accelerating pace of consumers’ migration to digital content. “Those changes are going to be permanent and have a longer term impact.”

However, the digital portion of advertising revenue is set to increase, largely at the expense of print rather than TV.

When it comes to paid content, Fenez also highlighted strong growth continuing for TV subscriptions over the next four years, driven by a greater number of people having access to services.

However, he returned to the idea of digital migration, showing video clips of people talking about how they download and stream content on their computers and smartphones – some tweets from attendees complained that the same video had been used last year, however.

Fenez said that the wider economic slump is a key factor here: people have less money in their pockets, so are seeking out cheaper (or free) entertainment. But if they’re also going out less, then they’re spending more time with that content.

“Where do we all fit in this new value chain?” asked Fenez. He cites three key trends, starting with the fact that the mobile era predicted for so many years is finally delivering on its promise.

“The reason is device revolution. Consumers are right now absolutely fixated by their device,” he said. “That mobile story is going to become a reality.”

PwC has identified seven key factors in operating successfully in the digital world: strategic flexibility; engagement with the customer; economies of scale and scope; speed of decision making and execution; agility in talent management; ability to monetise brands and rights across platforms; and strong capabilities in partnership structuring.

He then introduced Nonce Paolini, CEO of TF1 (photo), speaking via video-link from Paris, in French with an English interpreter.

Paolini made several observations from TF1’s perspective. First: TV is the most popular medium in France, he claims: viewing times are up, and sales of flat-screen TVs are breaking records. “It’s a key feature of a French household,” he says, while pointing to HD and 3D as key evolutions.

Second, TF1 is also trying to tap into other new technologies – everything from catch-up TV and online viewing through to social media like Facebook and Twitter – TF1 runs a web channel called Wat that makes heavy use of both.

“The partnerships that we have set up with Facebook and Twitter have made that quite operational,” said Paolini. And TF1 is making sure that all its programmes are made with the consideration of other platforms in mind from the start.

“Today we have the collective experiences on the screens in French households, moving onto a personal experience on other screens,” he said.

“At one point it was said that TF1 had missed out on the internet, but this is untrue,” said Paolini. “TF1 is in a singular position in its market, since it is the top media group on the internet.”

Following Paolini’s interview, another CEO took the stage: John Smith from BBC Worldwide. Smith said he says is the biggest TV distributor outside Hollywood, with a catalogue of more than 50,000 hours of content, and revenues of nearly $2 billion last year.

The core of the business remains that catalogue, but Smith said most of BBC Worldwide’s expansion has come from four new areas: getting into content production; expansion in specific countries; developing new businesses online and on mobile; and building global brands.

On the first of those, BBC Worldwide has moved into local production, starting with its Dancing With The Stars format. It has now been made into 35 local versions.

Smith says BBC Worldwide gets several benefits from producing these versions itself, making more money, retaining ancillary rights, and keeping those versions as part of its catalogue. It has also taken stakes in independent production companies, to help bring more formats to market.

The second source of growth for BBC Worldwide has been global expansion, focusing on key countries like Australia and India, as well as the US. “We have been working hard to establish some credible scale there,” said Smith.

“We’re now turning over $450 million in the US, but the key to this is great content… We’re discovering that marketing it is equally important.”

Third, there’s digital growth. “Every company has to have a digital strategy of course, even if it’s a stab in the dark,” he said. Digital currently accounts for 6% of BBC Worldwide’s revenues, and it’s aiming to boost that to 10% by 2012.

Five million Lonely Planet apps have been downloaded, and BBC Worldwide is planning a global rollout of its iPlayer next year, while continuing to evolve its online properties.

The fourth source of growth is brand building, turning shows into products, and live events – a Doctor Who live tour kicks off this weekend in the UK, while a Walking With Dinosaurs event attracted 4.4 million visitors around the world.

Social media also plays a big role. “If the Top Gear Facebook page were a country, right now it would be bigger than New Zealand… a new fan signs up to that site every four seconds.”

Smith accepted that there are many challenges around monetising digital content, including free v paid, and the gap between “analogue dollars and digital cents… patently cannibalisation is a problem.”

He also said the core issue is that it’s simply not possible to make “enormous amounts of money in this [digital]space…Wouldn’t we all like to be Mark Zuckerberg!”

Smith was asked about how BBC Worldwide is approaching China, which he said has been harder than expected due to ownership rules and restrictions around brand building, not to mention DVD piracy.

He also talked about the way BBC Worldwide works with talent. “Increasingly I find they are very savvy at understanding the power of their brand, and how to cross-promote and market that brand,” he said.

“You find you’re engaging with talent in ways that they’re ahead of you… that’s something we weren’t expecting!“