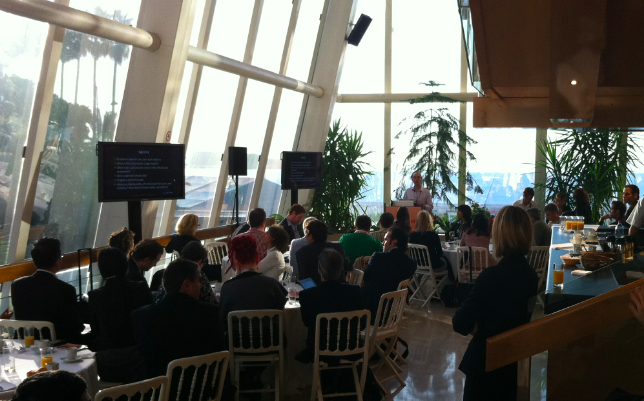 Wednesday is digital day at MIPCOM, with enticing sessions on everything from connected TV to tablets and apps. It started early, too, with a breakfast event focusing on new content and media.

The event featured two speakers, starting with Andres Jordan, VP of Innovation at Deutsche Telekom North America. What is a telco doing at MIPCOM? He explained.

According to Jordan, internet video is the trigger for internet traffic growth. “A massive, massive migration of content,” he said. “The move is happening. The latest status on YouTube was 600% growth in viewership last year, and we see it on our network.”

Deutsche Telekom wants to be carrying legitimate content on its network – as opposed to illegal BitTorrent traffic – and help content creators to make money from it.

Secondly, it also has something called Content eXchange, which is a web-based marketplace for video content. “Think of it as an eBay for buying and selling content for professional buyers”, said Jordan.

However, there’s a third way DT is looking to work with the content industry, with its partner Saffron Digital. The telco infests premium content – partners include Disney, Universal and Sony Pictures Group – and then delivers it to any device.

It’s called Premium Content Link (PCL). “My job is to talk to the studios, talk to you, talk to content producers, to get licensing rights, so we can sell the content to portals in Eastern Europe for example.”

In the future, DT will introduce beefed-up analytics features to help its partners understand how and where people are consuming their content, and how they’re discovering it.

“We don’t want to be creators,” he clarified, to explain that DT is not trying to be a competitor to content firms. “Telecoms guys are NOT creative people!”

How do advertising models fit in with this platform – is DT looking to sell ads around the content that it distributes? “This is something we are looking into,” he confirmed, while stressing that local knowledge is necessary for advertising – so DT would leave ad sales to its local mobile operators and ISPs.

The second speaker at the event was Tim Wright, director of technology at Sony Pictures Europe, and the DECE Consortium. His subject: UltraViolet.

What is it? “It’s a standard for enabling users to get hold of content more easily… on any device, by any delivery means, in any format.”

“There’s a kind of a format war like there was between HDTV and Blu-ray, for the formats used for electronic sell-through. And this is leading to general user confusion,” said Wright.

Wright also said that “we don’t have enough services in the living room”, pointing out that consumers want to watch video on their TV more than they do on their PC.

UltraViolet’s goal is to match the standard of DVD – “if you buy content from any retailer or service provider, it will work on any device”.

That includes cross-platform and DRM interoperability, and an interoperable rights locker, and it supports remote access streaming – consumers can play their content at friends’ houses by streaming it.

“UltraViolet is not about establishing a great big registry of rights,” stressed Wright. “There won’t be this big bag of content rights that any distributor can dip into and start selling your films… However, we hope UltraViolet will streamline that process of getting rights.”

However, rightsholders will have to stick to UltraViolet’s rules on things like how content is delivered and protected – they won’t be able to place extra restrictions on individual retailers or services.

DECE isn’t saying yet how many devices each UltraViolet user will be able to share their content between, or indeed how many people constitutes a ‘household’ account – that will be revealed later this year when the UltraViolet specs are released.

Wright promised that one of the advantages of UltraViolet is that “a small content provider cannot be pushed around by a big distributor… this is good for the smaller independent producers as well.”

DECE – the company behind UltraViolet – now has more than 60 members, including Fox, NBC Universal, Sony Pictures, Warner Bros and Lionsgate from the content space.

“This doesn’t have an explicit anti-piracy angle, but it has an implicit angle,” said Wright.

“It is easier to get legal content than it is to get pirated content… We’re not using this as a way of locking down content, to strengthen DRM and output restrictions… I think we’re being more liberal here.”

Apple and Google are not currently DECE members. Is it a problem if they don’t sign up?

“Apple, although they’re not part of UltraViolet as a standards body, could make UltraViolet devices if they wanted to,” said Wright, saying the same thing applies to Disney – another non-member – and its content.

Of course, the question is not whether Apple, Disney and Google could take part in the UltraViolet ecosystem “if they wanted to”, but whether they will.

Given that Disney is working on a rival to UltraViolet called Keychest – which has been rumoured to have the backing of Apple (whose CEO, Steve Jobs, is the largest shareholder in Disney), there is some doubt around those two companies’ willingness to sign up for UltraViolet.

Wright was asked about expanding UltraViolet to other forms of content, like music and games. He said that music would be more of a fit than gaming.

“That’s a possibility, but we’ve not announced any plans,” he said. “The RIAA is one of the members of UltraViolet, and certainly you could use it for music videos and concert footage, things like that… But game protection is much more platform-specific. It’s a harder sell.”