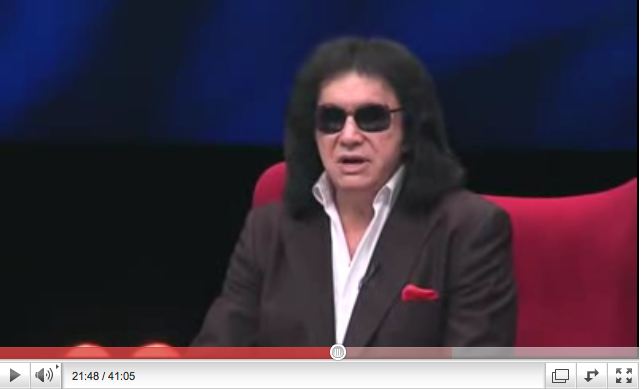 Deputy editor Peter White of TBI Magazine moderated a session that unfolded at the mercy of its enabler, president/GM Bob DiBitetto of A&E Network and Bio Channel, and KISS frontman Gene Simmons.

The latter came to plug his reality show, Gene Simmons Family Jewels, which just surpassed its 100th episode. But you know him best as the engine behind KISS, which is less a band than a half-billion dollar industry: in the last 8 years, it’s sold $400 million in concert tickets alone.

Simmons took great care to point out KISS has also lent its name and likeness to 3000 licensed products, from condoms to caskets. “We’ll get you coming and we’ll get you going,” he quipped. (Motorcycles and hi-def TVs are also in the works.)

There’s a logic to all this, which revealed itself not-so-subtly as the session progressed. Kicking off a montage for Family Jewels, a Gene broadcast over our heads intoned, “Why do people seek my advice? Successful band, successful business, successful family.”

That attitude, encapsulated in those words, about covers it.

“We’re always looking for something a little bit different, a little bit unexpected,” said DiBitetto of A&E/Bio. (His own contributions to the networks include such treasures as Hoarders and Intervention.) When Family Jewels was naught but an embryo, The Osbournes was riding the culture hard – and DiBitetto noticed it.

“When we had the privilege of doing the special with these guys, it struck me how different this show was […] I think there’s something very unexpected about a rockstar who indeed is actually a phenomenal family guy.”

This isn’t a lie. And if you were wondering about Simmons’ rock n’ roll liefstyle, he’ll gladly set the record straight:

“I’ve never been high or drunk in my life. I don’t smoke, I don’t do any of that stuff, I’m not really interested. Business is my crack.”

DiBitetto and Simmons are clearly well-paired. As a result, Family Jewels seems to have a shine of its own, independently of its big star. “We sit back, let it happen… I wish I could say that about […] you know, many of our friends. These guys get it and get it in a way that few do,” DiBitetto said of the Simmons family.

Incidentally, the proclaimed love of Simmons’ life was sitting in the front row, listening closely and with pride. She thanked the audience for coming before the session began, and later Gene waxed poetic about how they’ve been together 27 years, unmarried to date, but maybe not forever. “Stay tuned,” he teased.

If he seems candid and accessible, that’s because he is. Simmons is a big believer in an entity or persona’s “fiduciary duty” to “spread our brand.”

“The outreach is the most important thing,” he preached. “They’re not gonna come to you, you have to go to them. We’re in the reaching people business, all of us – and I want to give you an invitation.” Unexpectedly, he began pitching the audience on contacting him for help spreading his show to their territories.

“I’m easy to get to, and I’m your access to spreading this brand.” He helpfully added that he speaks a few languages, prattling in gloriously robust German and Japanese for effect.

And for him, this commitment is a 24-hour job. “Wherever I go, we’ve been given carte blanche by A&E to have a production budget – you get what you pay for – to have a camera crew […] everywhere we go, we are omnipresent.” The cameras are here, even, he added, proclaiming that our very own faces may be broadcast to such far-off exotic locales as Russia.

Make like Christian missionaries and outreach! Simmons commands at one point.

DiBitetto shares Simmons’ evangelical perspective. But where Gene is a missionary of consistency and scale, Bob emphasises dynamism. The approach of A&E/Bio is to be “comfortable with a certain amount of disorder, a certain amount of chaos, so these brands have the ability to be fresh, to evolve, to move forward.”

He elaborated, “Brands are like living, breathing creatures. Whether you’re a network brand or a show brand, you evolve or you perish.” It’s when companies have a brand they want to protect and preserve with a “little style book” of fixed swatches and whatnot, that there’s trouble, he said.

“It works for awhile, and then eventually pop culture just passes you by. Good luck catching up.”

It wasn’t just brands that got the tough love; television got some, too.

“The kids are outdistancing us, and they’re getting way ahead of the message,” Simmons acknowledged, but “the advantage of television is almost what a movie theatre has: while we’ve got you, we’ve got you. And the messages and the images are in your face. Versus if you want to find a song on iTunes, there are 15 million choices.

“What television needs to do is get sleeker. Cut away the fat. Get hipper.”

But he grew the most passionate, maybe the most irate, when it came down to the fundamental problem of his home industry.

“All of us are in something called showbusiness. And in the music business, which is part of show business, actually think it’s just music or show. They forget it’s a business.

“It is a business. You have a fiduciary duty to your own butt to make sure you maximise any potential and minimise any exposure,” he said, which kicked off the anti-pirate rage:

Make sure your brand is protected, be litigious, sue anybody – take their homes, their cars, DON’T LET ANYBODY CROSS THAT LINE.

“The music industry was asleep at the wheel and didn’t have the balls to go and sue every fresh-faced, freckle-faced college kid who downloaded a clip,” Simmons roared, “so now we’re left with hundreds of people without jobs. I have a record company.”

He illustrated these already-colourful points with a handful of stories: one about a captain who’s told he has a small hole in his ship (will he cork it now, or sink before arrival to the New World?), and another about a farmer who lets a cute fox run away with an egg. The fox tells all the other foxes, who come to ravage and steal and kill all the chickens, after which point the farmer’s wife divorces her witless husband and the children all hate him.

“Don’t let any cute foxes get near your henhouse,” Simmons rumbled menacingly.

His final takeaway dispels many fantasies about the legend of KISS, but is pragmatic enough that any white-knuckled marketer clutching a yardstick would be proud. Asked what the values are of KISS, Simmons admitted to having started “ass backward”:

“Instead of just being in a garage and going, let’s just do what we want to do, I studied the market.”

Predecessors Alice Cooper and The Who blew it for themselves by failing to meet demand with supply, he said. He explained supply and demand to us by comparing it to Americans’ insatiable love for ketchup, which would still be present even if Heinz were to die.

Herein lay the seed of KISS: “Let’s put the band together that we’ve always wanted to see onstage. it was manipulative, it was planned, it was blueprint, there’s nothing magical or creative about it. It was business.”

Next step for Simmons? A show for kids 12 years and under. “Because I want their money, too.”

(DiBitetto was slightly more zen, but no less epic: “Culturally I see a lot of chaos. Globally. I see a lot of content, a lot of disorder. And I think it’s our job to capture that in some way.”)