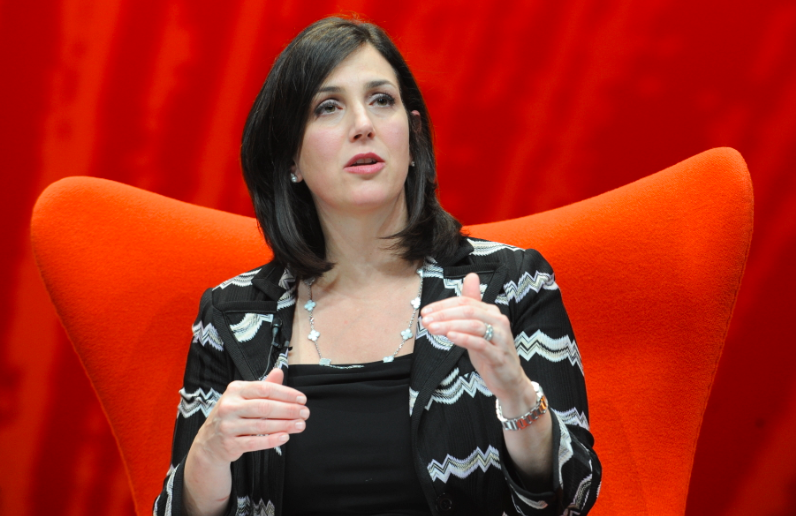 EMEA VP explains how TV companies can find new ways to connect with their viewers.
By Stuart Dredge on October 5, 2010 1 Comment

Facebook is a genuine 900lb gorilla in the social networking world now, with more than 500 million users. It is also an increasingly important platform for entertainment marketing.

Its VP EMEA Joanna Shields – formerly a European MD at Google, and president of Bebo – gave a keynote address at MIPCOM this afternoon, talking about how TV companies can engage with their audiences using social media.

She drew on her Google experience to start, saying that the last decade was about search and organising information on the internet, but that a shift is happening now.

“This decade is about something much more interesting to this audience, and that is it’s a social web. Right now the internet is much more focused on people: people have become the centre… The voice of your fan can be amplified to a chorus, and a focus group can be the size of a country.”

Shields also said that the social graph has the potential to become “the most powerful marketing medium ever created”, while reminding the audience that 70% of Facebook’s active users are outside the US.

She also stressed the importance of the fact that Facebook’s users are sharing details of the TV shows and brands that they love, using the social network.

“The most important word in the internet world today is not search: it’s share… I believe the people are the message.”

Shields cited a stat from a Forrester Research study, that 47% of European viewers aged 12-17 watch TV while using their laptops. Facebook has been tracking how people use its site in particular, too.

“30% of all TV viewers have admitted to being logged onto Facebook while watching a show,” she said. This is Facebook research based on events like the Super Bowl, the Oscars and the World Cup.

Shields recommended that media executives should realise that social is now an inseperable part of the TV watching experience – “these stories are the beginning of the conversation, and not the last word”.

Shields talked about the idea of ‘narrators’, by which she stressed she did not just mean TV producers, but also games firms like Zynga – which has 200 million people playing its Facebook games – and brands like Burberry, which uses social media to engage with its consumers.

Shields talked about some of the most popular TV shows on Facebook. Family Guy has 18 million fans on the social network, House has 14.2 million, and South Park has 13.6 million. Meanwhile, Top Gear is the top European TV brand with 4.8 million Facebook fans – of whom 60% are outside the UK.

Shields said this shows how Facebook can be used to build a TV brand outside its core market.

She also talked about a recent poll on The X Factor’s Facebook page, asking fans whether judge Louis Walsh had done the right thing: it generated 1,070 comments and 1,117 Likes within seven minutes.

Shields praised Fremantle for the work it’s done with The X Factor on Facebook, with a quarter of a million status updates every day based on the show in the UK alone.

“The future is here, and the potential for the media industry is nothing short of phenomenal,” said Shields, closing out the speech part of her keynote, before, shifting to an interview with C21 Media’s David Jenkinson.

He asked about the difference between engaging with traditional TV advertising and Facebook’s more interactive ads.

Shields said that advertising has traditionally been a campaign-style activity, which eventually trails off. “Facebook can be this way to deliver reinforced messages about your brand and what you’d like people to engage on,” she said.

How does multi-screening by younger viewers affect the future of content? “I think children are going to be interestign to watch, because they’re so used to multi-tasking anyway, and we’re going to have to figure out how to entertain in a world where people have this short attention span,” said Shields.

She also talked about the new Facebook Places service, which lets the social network’s users ‘check-in’ to tell their friends where they are. Shields highlighted the potential for location-based advertising on Facebook Places in the future.

“If you walked into a store, somebody could actually send you a coupon that’s valid for that store,” she said.

Shields was asked about Facebook as a network, in a connected TV environment. Could any TV show be a channel on Facebook? “It’s not in our plans, but it probably should be in the plans of everyone here: the ability to use Facebook to deliver content.”

How about connected TV? Shields said that Facebook’s social plug-ins allows people to sign in to the social network from other devices and websites. “I can see someday the ability to sign in using your Facebook ID to a show,” she replied, although gave no further details on exact plans on this front.