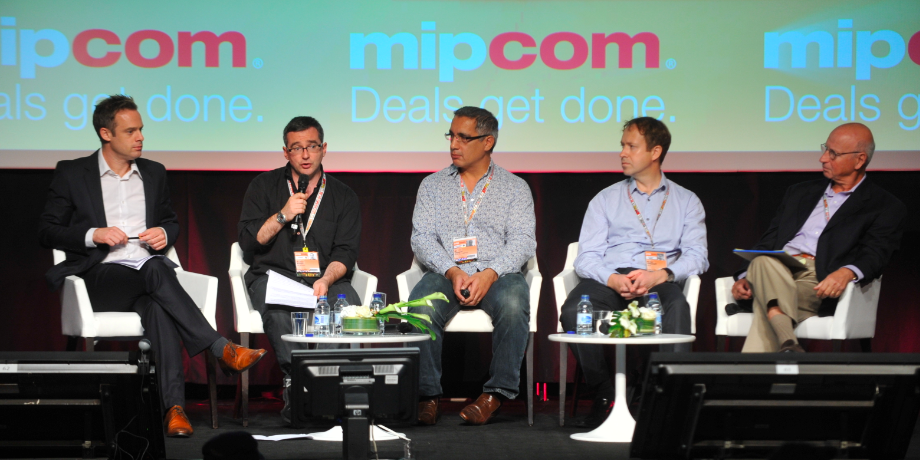 Challenges and opportunities in the world of digital licensing.
By Stuart Dredge on October 7, 2010 0 Comments

Consumers want to watch their favourite TV shows and films on a variety of devices, and in a variety of places. The technology certainly exists to make this possible, but it is throwing up thorny rights dilemmas for the entertainment industry.

That was the topic of a panel debate at MIPCOM this morning, moderated by Jonathan Webdale, editor of C21 Media. The panelists were (l-r):

Baker started things off, pointing to the huge number of platforms available for watching TV on, from iPad to connected TVs and consoles. “The issue of where your rights are, where your content is, has never been more important.”

Typically in the UK, content appears first on terrestrial channels in a particular slot, and then may be repeated at a later date, or go straight onto online proprietary platforms like the BBC’s iPlayer. And then it may move to secondary channels.

“Up until this point, the value has all been in that first window,” he said. “Other platforms are very much secondary. They haven’t been able to generate enough revenue to make it worthwhile for producers to go directly to those platforms.”

Baker explained that 50% of students in the UK are watching exclusively online content, while Hulu in the US had more than 24 million viewers in June.

“There’s a bit of a landgrab going on,” he said, suggesting that broadcasters are keen to extend and exploit their rights in the burgeoning digital market. Yet he also claimed that broadcasters often don’t do a great job of exploiting them – and that producers are best placed to do the job for their own content.

Baker also said that producers must have a strategy for putting their content online, since consumers will do it for them if not.

“If you don’t put it online yourself, it will find its way there mysteriously,” he warned. “It will be posted on YouTube or passed around P2P networks… If you don’t control it, you therefore can’t monetise it.”

Baker said broadcasters and producers should be thinking of more imaginative approaches to windowing their content – potentially even making it available online (for a fee) in advance of its airing on TV, to build buzz and a following.

“The task for all of us is to work out where the audience is going to be, and how they want to consume things,” he said. “We need to make it available to the audience, and that means the return for us is maximised.”

Ali Vaahdati from Digital-i was next to speak. His company provides ‘smarter’ analysis of audience data across devices, and will soon publish a report together with Rights.tv, from which he gave a few highlights.

In 2002, the five big UK channels made up 75% of the TV audience, but now you need 30 channels to get to that 75% proportion. During the same period, a typical ITV 1 drama has dropped from 9-10 million viewers to 5-6 million viewers.

However, Vaahdati pointed out that strategic use of repeats can still build up 10 million viewers, in different time slots on different channels. “The audience is still there, but they’re not all going to watch it at the same time.”

He warned that talent costs can be prohibitive for this though, citing the example of The Bill, which attracted 1.1 million viewers in a late-night repeat slot, but required 1.5 million to break even due to talent costs.

Vaahdati said that broadcasters and producers worry about whether excessive repeats will harm a show’s brand. He said not, using Top Gear as an example: when it started airing repeats on digital channel Dave and BBC 3, its audience increased to 8.4 million viewers in 2007, from 5.2 million in 2005, when it was only on BBC 2.

He also cited Channel 4’s The Inbetweeners, which gets nearly six million viewers across six repeats, across the broadcaster’s portfolio of channels. Partnerships are also being forged: the BBC has even shared premieres of shows like Heroes with science fiction channel Syfy, since it is not a direct competitor.

The next speaker was Richard Kingsbury from UKTV, talking purely about the value that can be unlocked from linear TV. His company has developed ten thematic channels to monetise the BBC’s archives of comedy, drama, natural history and entertainment shows.

“Even when you look at people who watched six, it’s just two million… These aren’t repeats. If you haven’t seen it before, it’s a premiere.”

UKTV’s research also shows that the longer the gap between a premiere on a main channel and a repeat on a digital channel, the more the audience declines.

It has identified four phases in the life cycle of a programme: the premiere; the catch-up opportunity for a month afterwards; repeats on the digital extensions or the main channel; and then the wider repeat cycle on the secondary market.

UKTV isn’t hugely active in the online/digital space yet, and Kingsbury was notably cautious about the opportunities. “People online don’t want to pay for things, they assume everything’s free. And that’s problematic.”

Finally, Canadian producer Alan Handel gave his perspective, saying the Canadian funding system strongly encourages producers to think of “multi-platforming” their productions. “There’s now an obligation on the part of every producer – and broadcaster for that matter – to have a multi-platform component,” he said.

However, this is apparently moving slowly. Handel showed a licence for a factual special that his company produces, which is valued at $700,000 for the television rights alone. All other ancillary rights are valued at $900 – “and that’s after a negotiation when we managed to get them up from $600!”

Handel said this puts producers in a difficult position – without the financial incentive to make imaginative and innovative use of the ancillary rights, the momentum behind any digital efforts seeps away.

“I’ve always believed that one of the challenges in television is for the big and powerful companies that control the industry to have the foresight to allow television producers and production to companies to thrive, rather than just survive,” he said, saying this applies just as much to digital rights.