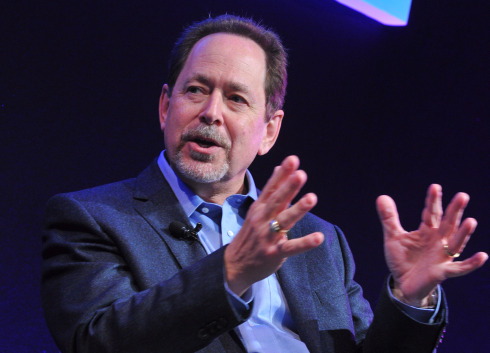 If you don’t know Michael Poryes by name, you likely know his work. After a stint as a stand-up comedian, he became a series writer for such oeuvres as Disney’s That’s So Raven and Hannah Montana.

It rings odd that he transitioned from standup to direction and production. But when MIPCOM News editor-in-chief Julian Newby asked what his worst experience as a standup comedian was, all became clear:

The scene: 1:15 am, some years ago. Poryes’ act followed a young David Letterman. There were eight people in the audience, six of which left with Letterman, leaving two drunk hecklers.

The thought that ripped through Poryes’ consciousness: “I don’t know if I want my life to be at 1:15 in the morning, trying to make two drunk people laugh.” That was his last show. Writing for TV seemed the most natural next-step.

Plenty more revelations where that came from. Kicking off the industry talk, Newby’s first question was lightly loaded: “How do you get into the minds of teenage girls?”

Poryes, deadpan: “I hang around schoolyards until I’m asked to leave.” Collective giggles. Once all quieted, his real explanation adopted the form of nearly all patient trajectories. Most of the work he’s done has been for girl-centric shows, even pre-Disney, like The Facts of Life, and – my childhood favourite – Out of This World.

“Writing a show with a girl in the centre is interesting to me because girls put their feelings out there,” Poryes mused. To write a girl, “I take a guy, I strip away all the BS and the macho stuff, and I’ve got a girl! We all have that [core]… you know?”

Each of his shows sports a clear dynamic with a small twist on the ordinary: those who remember Out of This World will recall Evie’s MIA dad, whose inability to be present was mysterious but mostly had to do with being an alien from outer space. Evie’s primary struggles dealt with that void – and with the alien powers she inherited.

That’s So Raven developed as a response to Raven Simone’s own nature. Poryes sees her as a “modern-day Lucy,” someone around whom the show needed writing: she was a “great physical comedian,” making the series’ humour big and extravagant. (Raven’s character quirk: the ability to see mere seconds into the future, resulting in all kinds of bizarre adolescent hijinks.)

In Hannah Montana, Miley Stewart stars as a real girl leading a double life: that of rock star Hannah Montana. She keeps both separate, two worlds secret from one another, because she wants people to like her for who she is.

This makes her both relatable and aspirational. The notion of her, even as a rock star, becomes “something you could touch.” So the question behind every show became, What “real thing” is Miley Stewart gonna go through this week, and how will it be affected by the fact that she’s a rock star?

“What’s most important in developing any series is the truth,” Poryes expounded. “Be honest, be relatable. Don’t write to a premise or gimmick … write to characters and relationships.

“Give the kid audience something that is really relatable and honest.”

The premise of that idea follows thus. When you look at what kids were 30 years ago, what they are now and what they’ll be in 30 years, there remain universal truths: pimples, embarrassment, wanting to be popular. You fight with parents, fall in love, create drama with friends, suffer that one friend who loves you that you don’t love back.

These stories belong to all kids in all cultures, Poryes believes. The same applies to writing for cross-platform distribution: when you focus on universal truths about kids, the work seems to extend itself naturally to other media.

Instead of obsessing over what’s current, Poryes encourages the industry to keep the bar high in terms of honesty and intelligence. “Don’t write down to kids; write up. They’re so smart,” he said.

Curiously, actress Miley Cyrus wasn’t the natural choice for Hannah Montana. The ten-year-old turned in three auditions before they finally flew her down, but even then there remained the choice between her – a perceived risk who wasn’t quite the Hannah Montana creators had in mind – and a safer girl.

Interestingly, it was Gary Marsh, the head of Disney, who “went courageous” and pushed for Miley.

To survive in this market, “you need courage. You don’t go the safe way. Go the way your gut’s telling you to go,” Poryes said, adding that it inspired him to work for a company that obeyed this tenet, at least in the case of Hannah Montana.

From standup, the lesson of comedic timing affects how he approaches show-writing and direction today. The formula for comedic timing in Poryes’ shows is a three-step process, similar to breathing exercises for the rage-inclined:

He taught these to Miley himself, relishing in how she’s mastered the art of pausing, reading a face and delivering a line that springs from her mouth with infectious life.

Toward the end of the session, Julian asked how Pouryes approached the success of Hannah Montana. “Did you ask for more money?” he queried wryly.

Pouryes acknowledged the joke with a grin. “My job was to keep the cast grounded,” to provide a safe place, stability amidst the hype, he said. Particularly for Miley.

His latest project focuses slightly more on the Y chromosome: Life With Boys follows a dad, three boys and their male dog. The work is “something I’ve always had in my gut”: it lacks a huge hook, but leaves the door open for long story arcs, expanded character definition and – crucially – allows for examining both girls and boys on an equal plane.

“These are questions no one has the answers to. We’re gonna ask them this time,” Pouryes whispered scintillatingly into the auditorium.

To illustrate what he means, he cited the mystery surrounding boys’ seemingly universal tendency to squeeze chocolate into their mouths and drink milk out of the carton.

The why? behind that created an unexpected ripple of youthful laughter in the audience. Crucially, it promises to shoot well back in TV land, too. I’ll leave it for you to discover.