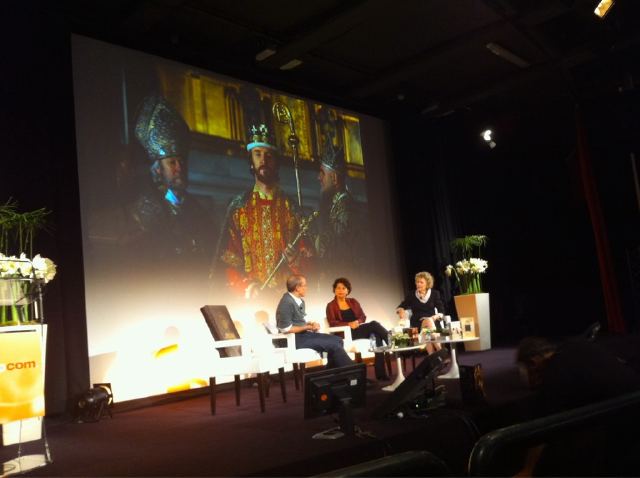 A paper-to-screen journey of cathedral construction caliber
By Angela Natividad on October 4, 2010 0 Comments

This piece was a serious labour of love. Today’s session, moderated by Hollywood Reporter editor-in-chief Elizabeth Guider, featured the Ridley Scott co-founded Scott Free Television’s president of TV, David Zucker, and cofounder Rola Bauer of Tandem. Like the book-cum-TV-epic, discussion was content-rich and flowed beyond reasonable boundaries of time (about 10 minutes over the allotment for the masterclass).

The session began with the trailer for Pillars of the Earth, the eight-hour miniseries hosted by Starz.

The ultimate goal was to air the series in the United States, whose sizeable audience would justify its enormous production cost – $40 million. The odds were daunting: the format, and challenge of it being a historical piece, made finding a receptive broadcaster difficult, said Zucker. And they didn’t want to compromise in length or production quality.

So they began in Europe. Curiously, “Pillars” didn’t enjoy a lot of UK support. Its success bloomed in places like France, Spain and Germany, where Tandem is based.

Geography was one challenge. But the biggest issue was cash. By the time Follett was willing to turn over the rights to the story, it was 2008: the absolute worst imaginable year for funding anything, much less a multimillion-dollar made-for-TV period epic.

Bauer let rip an expletive when reflecting over 2008, illustrating the grittiness of the situation: thinking about it clearly still elicits a reflexive cringe.

The name of the game was saving money.

“If you bring a number of broadcasters to the table and they have a respect for the creative material, and they allow you to do what you do best […] then they don’t have to carry the full freight of the financing,” Bauer said. That is, there are international co-productions and cofinancing options. The challenge: to show people they could get on board this project without paying the full $40 million. But they’d have to be respectful of the creative.

A breakdown of the financial patchwork that helped make “Pillars” a reality:

So there you have it: the formula for raising $40 million.

Back to the problem of getting it to the US. Long story short, Scott Free/Tandem deferred fees until it made more money. When it finally closed financing, it used cash on hand to start producing and kept in touch with a panoply of US broadcasters. The final breakthrough was a mix of both luck and timing, but patience and optimism helped.

“We had the holy grail in film and television,” said Zucker, so they were certain the market would eventually be receptive. He benevolently added, “It’s just hard [for broadcasters]to take that risk.”

An American director facilitated things: a talented person with a specific “American” style of storytelling and pacing, making the overall format easier for broadcasters to swallow. And while most actors were British (speaking to the producers’ preference for “organic casting,” lending more authenticity to the scene), the screenwriter was American and also performed in the series.

That was a just-so-happened: he was invited aboard early on for his unique talent for adapting hefty books to screenplay.

Production was finished by December. In mid-December, they went back into talks with Starz, one of the many networks they’d been in ongoing conversation with. A past history with the network, screen-ready content (Starz watched the first two episodes), and a clear timeline for when they’d need an answer moved all this right along. The deal was made by January’s end.

Today, Scott Free and Tandem have the rights to World Without End, the Pillars of the Earth sequel that takes place 200 years later. Lessons learned:

“Don’t have as many interest fees,” Bauer said, “It just takes away from the screen. Try to lock down everything up front.” She explained they spent a lot on gap financing. “But either our financiers have to give us money for lower interest fees, or we have to build trust …”

“Through editorial, we made a lot of discoveries about how best to tell a story structurally,” Zucker added. It’s critically important to hook viewers “to a story’s spin” within the first 30-40 minutes, and “Pillars” packed a ton in the first 20. That experience in particular will inform the treatment of its sequel as the content makes its inevitable conversion from printed page to audiovisual.

The 8-hour format, however, will remain.