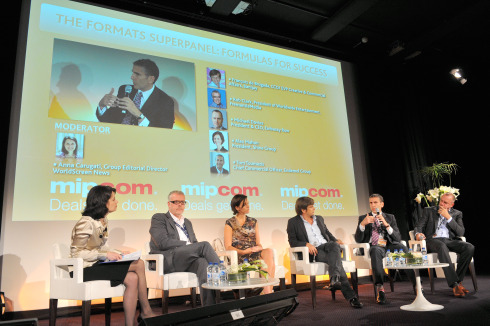 Today’s Formats Superpanel, moderated by group editorial director Anna Carugati of Worldscreen news (left), hashed out the formats for success. Of special note were formats that managed to buoy themselves with growing viewership during the economic crisis.

Each enterprise had a philosophy for formats that fly, fueled by experience from the last two years. When Carugati timidly wondered, “What are buyers asking for, where’s the demand…?”, the answers fell thus and blossomed into separate, video-infused manifestos:

Primetime and Asian markets are lively, said Clark. But if you’ve got a good show, people will buy it. Nothing beats solid product.

“Solid product” became a natural segue into what he calls the “Holy Trinity”:

Broadcasters can’t live without them, he beamed. Viewership for these golden calves has grown.

Shine Group’s point of pride is Masterchef, said Mahon, in part because of its scheduling flexibility: it can work on primetime, cable or elsewhere, from a half-hour to an hour. Masterchef performs nicely and pads out calendar gaps, which is appealing to buyers. The show was sold in over 18 territories this year.

Toumazis became a champion of transmedia and social media. He encouraged attendees to built a complete package of content and IP that connects with audiences. Spread your formats; social networking in particular is becoming very important.

Davies later backed this point by saying that social media is changing formats. If you don’t find the angle, viewers will, and will bring the show into it. He imagines a universe in which things happen virtually in tandem with television. US-based network Bravo was his primary example.

Semantics of a “Format”: Basic Structure vs. Silver Bullets

Later, Carugati pondered the industry rumour of an “ecosystem of formats” that can sustain content well beyond their natural livespans. Toumazis said yes, he’s heard of this “ecosystem” and is often pressed by his superiors to drop the word with clients.

“I think we used to use ‘holistic’ a few years ago. But now we have moved from holistic and we’re at ecosystem,” he mused. Then, with derision: “What is that?”

We should be careful how we use “formats,” he preached. Audiences want great TV, tailored locally as much as possible. It’s impractical, at least in Endemol’s case, to try constructing the fabled “worldwide format” – the one that invigorates life in all markets, even the unthirsty.

Clark seized this opportunity to dive in with his format philosophy, followed by an illustrative video.

“A format is a really simple thing. It’s a structure in which a story’s told. And that’s really all it is,” he affirmed.

“If you’ve got a great beginning but then it goes nowhere, work on it. A format is a story” – be it a situational comedy or reality TV.

In the case of the Got Talent series, show structure drives foundation, content is the “middle,” and there’s a varying deluge of happy endings.

He then shared a video in which this notion is delivered like a TV drama, using numerous examples from his aforementioned Holy Trinity. “Beginning,” “Middle” and “End” exploded with Technicolor examples: Simon glaring critically at unlikely superstar Susan Boyle, followed by her decibel-pushing climax; Beyonce taking a fan’s hand and singing with her (and to her!).

Not to be outstaged, Toumazis followed up with a trailer for Endemol’s The Money Drop, a game show in which you receive enormous piles of money (reminiscent of that one scene in Blow) and must protect it over the course of eight rigorous questions. When you botch a response, the money can fall through tortuous trapdoors and into oblivion, right before your eyes. Quelle drame!

Israel, Germany and Greece, among other regions, have snapped the show up. For each territory, the show is reinterpreted to local audiences with cultural camouflage: Million Dollar Drop (US), Million Pound Drop (UK), or the brusque but effective Millionaire (Russia).

A triumphant voiceover proclaimed, “The Money Drop has become must-see TV! And it was an internet phenomenon!” His good cheer and winning spirit was punctuated by a bubblegum pop cover of “Don’t Stop Believin’,” lending ambiance to imagery of couples clutching each other and spilling tears as money slipped through the traps and into a void beneath their feet (the floor was helpfully transparent, prolonging the effect).

“You could walk away rich if you’re brave enough. Life changing stakes, high emotions and a great story to every game! Brought to you only by Endemol.”

Mahon reemphasised the importance of versatility, of which Masterchef and The Biggest Loser are demonstrative: their length can vary, they spur spinoff shows (Junior Masterchef, Masterchef for Professionals, Celebrity Masterchef), provide extensive brand/merchandising opportunities, attract flexible broadcast/production partnerships, and are naturally predisposed to various mobile applications.

Structure-wise, the Masterchef brand of versatility strikes as an ingenious cross between Chicken Soup for the Soul, franchised and appropriated by every market like your local McDonald’s.

Masterchef is now in 20 countries worldwide, including the US, Australia and India.