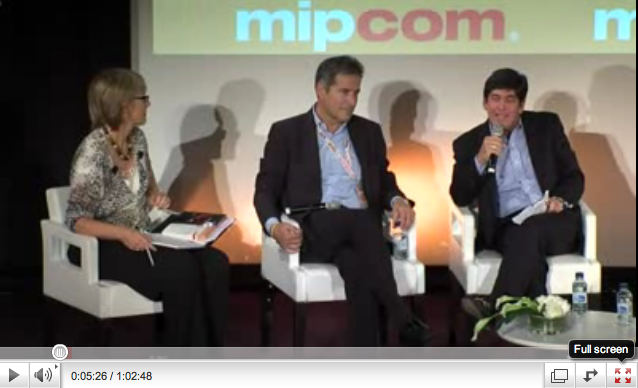 The Diagnosis on What @radical.media's Friedman Calls Our 'Fragile Business'...
By Angela Natividad on October 5, 2010 0 Comments

There was more knowledge in this session than could be tapped in an hour, even with help guiding discussion to points of relevance. (Media commentator/journalist Kate Bulkley always knows exactly what to ask.)

The dominant theme: increased integration between the worlds of all these “white men,” as Bulkley tactfully put it when she introduced them. (She wanted to squash post-discussion complaints about lack of diversity. “They represent a very important cross-section,” and their knowledge merits hearing, she defended, and she was right.)

Friedman drew our attention to the four boxes of technology: radio, TV, computers, telephone. They used to be divided entities, served by their own companies, structured similarly: everyone their own metric, everyone a specific job.

But @radical.media’s recent acquisition by FremantleMedia speaks to total erosion of these silos – and resulting confusion.

Asked what the motivations were for joining FremantleMedia, Friedman said, “A marriage has to be a great marriage on both sides.” For @radical, the “advantage is to achieve and take advantage to the global reach that they have” – in particular the licensing group FremantleMedia provides globally. And they’ve already worked together some time: their distribution relationship has lasted four years.

The limelight was turned on Tortorici then, with Bulkley not-so-jokingly pointing out that this collabo invades their territory.

“We’re all in that same unhappy and uncomfortable place of being both competitors and allies and collaborators, depending on the situation,” he said simply. You can’t go into an arena assuming that the position you played yesterday is the position you’ll play today.

Delport of Havas Media France sided with him. “We don’t want to be full service.” He calls it arrogant. A media production team is “focused on delivery and end-to-end.”

The trick is that the way in which one does this is changing. “We sometimes need to be risky-taky” with opportunity and even product placement, he said. The two examples given include Evian’s Roller Babies, an explosive campaign for Evian that the brand hadn’t even cleared when they began developing it.

Also, approaches to product placement are changing. France is a massive consumer of blockbuster Hollywood films, and French retailers increasingly seek ways to incorporate themselves naturally in that medium. A small French boutique, innocuous to American watchers, might just make the film on a whole more relatable to French audiences, Delport said.

French TV is also cracking its doors open. In the popular soap opera Plus Belle La Vie, characters ordered set top boxes in one episode; the next day, in the following episode, the boxes were delivered.

This may sound passé to many, but Delport emphasised that product placement was for a long time stalwartly forbidden in France. It is less and less so; much of that has to do with the subtlety that comes with unlikely entities that are now working together.

The benefits of media bleeding into media manifest in other ways, too. When you look at who’s playing in the space, you’ll find that “this is a very fragile business right now,” Friedman said. When his Austin Powers budget was cut by $30M, he had no choice but to seek coproduction partners, of which one was Virgin, which “opened that movie up” in unexpected ways.

“The advertisers are insisting that we better integrate them. No one was happy about it … it was a lot easier in the older days. As a result, this business has to become more credible and creative,” he said. Five years from now, this thing we call “integrated marketing” will be a natural part of the development, production and distribution process.

A common observation of media entities trying to “get” the integration thing is building one piece of content and trying to disperse it elsewhere: web series repurposed to TV and vice versa, and TV ads stretched thin and made digital. These so often flop.

This isn’t unique to digital. How many great movies have been adapted to TV, only to die thuds?, Tortorici asked wryly. As soon as you take something and pass it to another creative auspice, there’s a risk it won’t come out the same property. And sometimes it just can’t be the same experience.

You’re also dealing with people accustomed to working under the silo model.

Depending on which pot is funding a product (advertiser, network, etc.), it receives a certain sort of benchmark criteria, explained Vinton. It’s simply too loose an argument to say “we’ve got a return on engagement” unless you can manifest that with a clear distribution path.

Tortorici agrees. “Clients want more and more value for less and less renumeration, that’s just a fact.” They’re also used to exercising a lot of control. “It’s one of the reasons why a 30-second commercial costs as much as a 90-minute movie.”

In contrast, this new world is totally remote: you’ve got producers trying to what they do, and broadcasters subject to new rules.

From his experience adapting bestselling book Freakonomics, Friedman added, “When you’re working with a network in most cases, they’re not set up for branded content. Then you have an ad sales person who’s focused on the bottom line and selling advertising.” The challenge: how do you really understand both processes?

“This is a lucky hit or miss business anyway” – but it’s difficult to get a hit on television, harder still when you have to be watching out for a brand’s performance that may not necessarily be in line with the networks’ goals.

How to navigate all that – past motivations slamming into present realities, maintaining content integrity with sponsors sitting in the waiting room? Integration increasingly resembles the melting pot nightmare that was Early America, seeking a Constitution from a few clear heads that can see a hundred years down the line.

From Delport: “We need great clients, CEOs that believe their brand will move forward in this manner. A conviction business.”

From Friedman: “Our key client as an audience at the end of the day. And if we forget that, we’re dead. This business is dead.”

Easy to say, but Tortorici points out you can’t really always know what an end user’s gonna consider authentic. “You can focus group things from now until the cows come home. because you’re not gonna know what’s gonna play until it plays.” It’s the old refrain: People don’t always know what they love until they see it.

“This is all in motion, this is very organic. We’re just gonna have to be very quick on our feet.”

What we’re engaged in together is the art of storyteller. And a story well told doesn’t pop the bubble, he went on. It provokes you to want to know what comes next. Collectively, that’s our challenge: not to bump the narrative, but to cultivate it.

“A brand has to provoke and at the same time engage, encourage and sustain a relationship,” Tortorici concluded.

Refreshing to hear that from those so near the peak of the mountain.